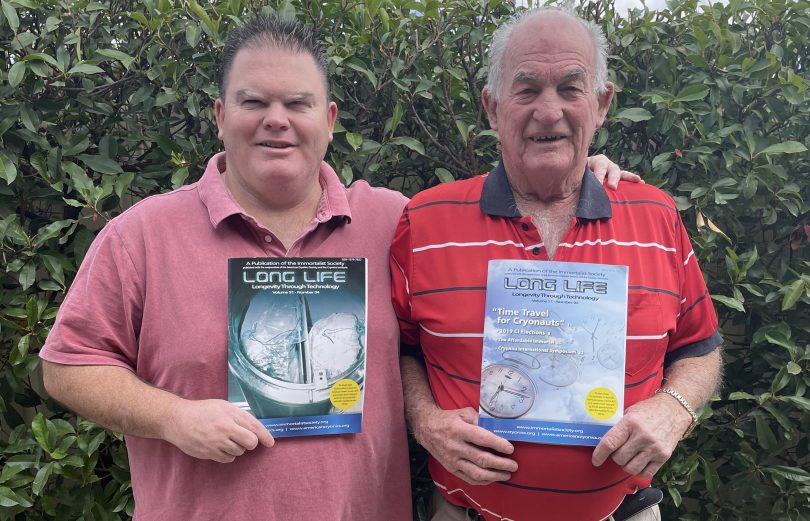 Goulburn father and son, Ron and Guy Fielding, hold magazines from the Cryonics Institute in America, where they intend to be frozen when they die. Photo: Supplied.

Goulburn father and son, Ron and Guy Fielding, aged 79 and 42 respectively, are prepared to pay a total of about $65,000 for the privilege other people such as Walt Disney were long-rumoured (albeit falsely) to have also signed up for.

The cab driver and club manager have each paid a $1600 deposit to be cryogenically frozen at the Cryonics Institute in Chicago. They will pay the remaining $64,000 when they die.

Cryonics is a relatively new science that allows people to be frozen in the hope of one day being revived instead of being cremated or buried.

The chance at a second life may carry a heavy price tag, but as Ron and Guy say, even a cremation or burial costs thousands of dollars. 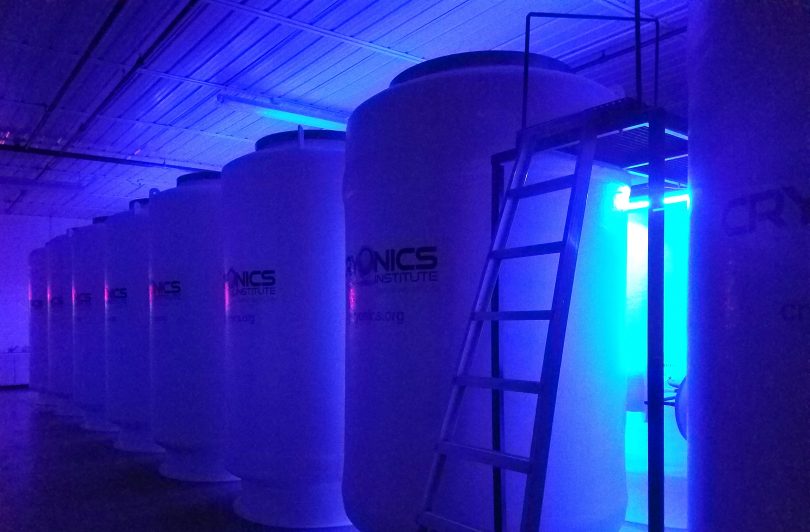 Tanks inside the Cryonics Institute in America where bodies are frozen. Photo: Supplied.

Ron had heard about cryonics many years ago and needed a family member or friend to sign up with him to be accepted into the Cryonics Institute. That’s when Ron put his hand up.

However, the pair would prefer to be frozen in Australia and they hope Southern Cryonics in Holbrook, southern NSW will be finished in time.

Southern Cryonics founder Peter Tsolakides says the building is finished and equipment is due to arrive in March.

However, people in Australia will need to be trained to freeze their patients cryogenically and, at the moment, the only people with the know-how are overseas or interstate. The company is waiting for the COVID-19 pandemic to be over to proceed.

READ ALSO How do we manage quarantine sustainably in the long term?

Ron and Guy are both aware that their choice isn’t widely supported, especially not by their family members who think it’s too expensive, are against the idea for religious reasons or worry what they’ll come back to.

“It’s hard to convince people it will work, but I’m a fairly open-minded person, and with science and technology advancing, I can see the possibility there,” Guy said.

“Yes we’re taking a gamble, but you can never say never, and the alternative is to be buried or cremated, which there is no chance of coming back from.”

Likewise, Ron said: “Look how far we’ve come in the past 200 years. We only started flying planes in the 1900s and now they’re going to the moon. I’m a great believer in science, and I just believe it’s going to happen one day.”

As for what they’ll do if they are brought back to life, Ron would like to see how current family members’ lives panned out, while Guy will be eager to explore the new world he wakes up to.

Both expect Earth, if it still exists then, will look very different.

“There won’t be petrol or tyres, we’ve got to run out of materials in the earth eventually, and I don’t think people will be working, I think everything will be done by robots,” Ron said.

Whatever the future, if everything does go to plan, Guy is glad that he’ll be waking up with his father.

Y would u want to come back to much money

But with global warming, they’ll come back well before they’re due and there will still be re-runs of Home and away on the box

Wait..why would you freeze yourself when you die? Shouldn’t you do it before you die??

Ray Pemberton I’ll freeze you for half of that

Could be an option for anyone really hanging on for a non-Labor government in the ACT.

Michael Dolan what’s wrong with you?

I would rather go to heaven.

Maybe we could pack a few covid19 vaccines in with them.

Will they be eligible for a refund if it doesn’t work!

There’s a great podcast about this.

Spoiler: It did not end well ha ha ha

I defrosted a chicken the other day. Sadly, upon defrosting it did not regain the ability to cluck or lay eggs. 😥

Say hello to Walt Disney for me when you re-animate 😂

$65K for two people. I wonder if this will be the form of new age care.
Can gov just legalise euthanasia?

I suspect they won’t ever wake up and in the off chance they do, I can only imagine the consequences such a foolhardy act.

Max Heffernan wouldn’t do it with me dad

But.. they will already be dead? Do they think in the future we will be bringing the frozen dead back to life? Why didn’t I think of starting this scam, I mean ‘business’ 😂

I’ll freeze you for 50k each

And which body is going to be the first experiment? A Frankenstein Monster.

What a waste of money. Give it to me instead!!!

When they defrost you, you are still dead 🤣

Why is all I can say, if and when they defrost you all your family friends, etc will be gone.

I have a bridge for sale if they’re interested!!

Whoops, power outage, who will pay compensation for all the defrosted bodies?

Doesn’t this work better if you’re frozen when you are still alive and healthy…? 😜

Rachael Axford for these two I reckon😂