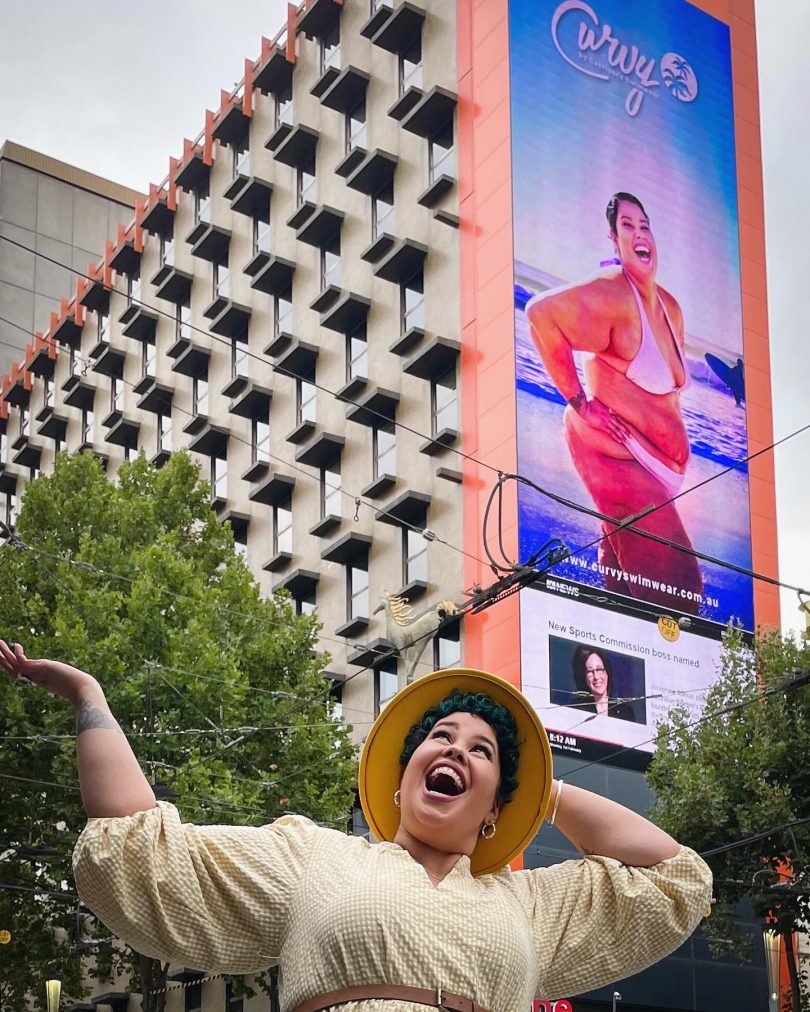 April Hélène-Horton was excited to see herself in Curvy Swimwear’s campaign ‘Beach Please’ in February. Photo: The Bodzilla.

The 36-year-old says she was excited to be the first plus-size bikini model to appear on a towering Melbourne billboard in February but will be more excited if she’s not the last.

“I certainly can’t say that I represent all marginalised people. I am one of so many and those many people need to be represented because none of us are the same,” Ms Hélène-Horton told Region Media.

“Whether it’s people with dark skin, light skin, disabilities, chronic illness or from the LGBTIQA+ community, all those things need to be represented.

“A bi-racial, light-skinned, mid-sized woman is not the be-all of representation and inclusiveness.”

The self-confessed ‘body love activist’ is on a mission to help others love themselves more and is doing so by loving herself.

Even the word ‘plus-size’ is one Ms Hélène-Horton associates with. Instead, she wants others to accept her body as normal, just as she has.

Confident in front of the camera from a young age, April always dreamt of becoming a model but was told she’d have to lose weight.

It was by choosing to ignore the advice that gave April the freedom to pursue her dream. 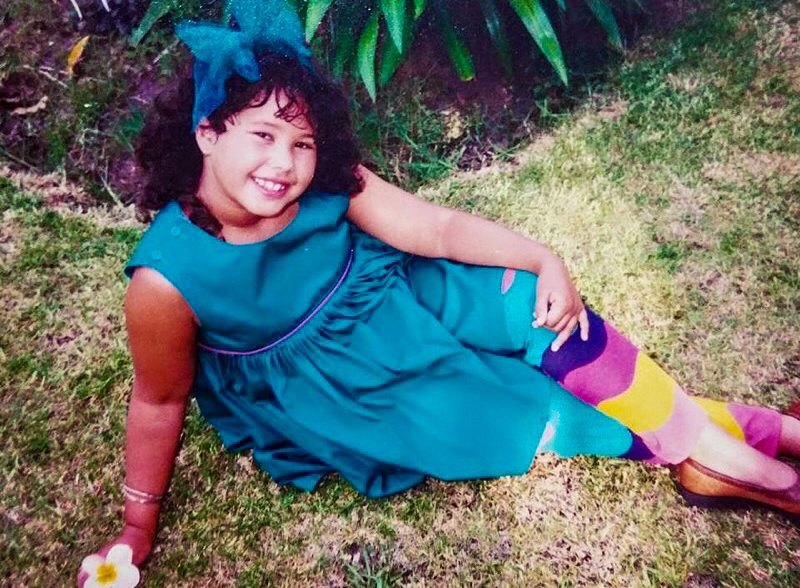 April was always confident in front of the camera but was told she needed to lose weight to become a model. Photo: The Bodzilla.

Now, she refuses to allow anyone to tell her what she should do, eat or think about herself, and wants to teach other people how to do the same.

“There’s a couple of things in the works that I can’t talk about, but you can expect to see me around in the near future,” she said.

“My expectation is that with the publicity from this billboard there will be exposure to the idea of having fat bodies, brown bodies and disabled bodies on our televisions, billboards, wherever.”

Curvy Swimwear launched the campaign in response to women telling them they hadn’t been to the beach in years because of body hang-ups.

The company hoped that featuring the beautiful and happy April, enjoying the sunshine on the beach in a bikini, will give other women the confidence to do the same.

“‘Beach Please’ is the message we’re sending to make everybody feel included,” the company says.

And the best part, according to April, was the photo was taken naturally, without the photographer Jez Smith from Next Top Model, directing her to pose. 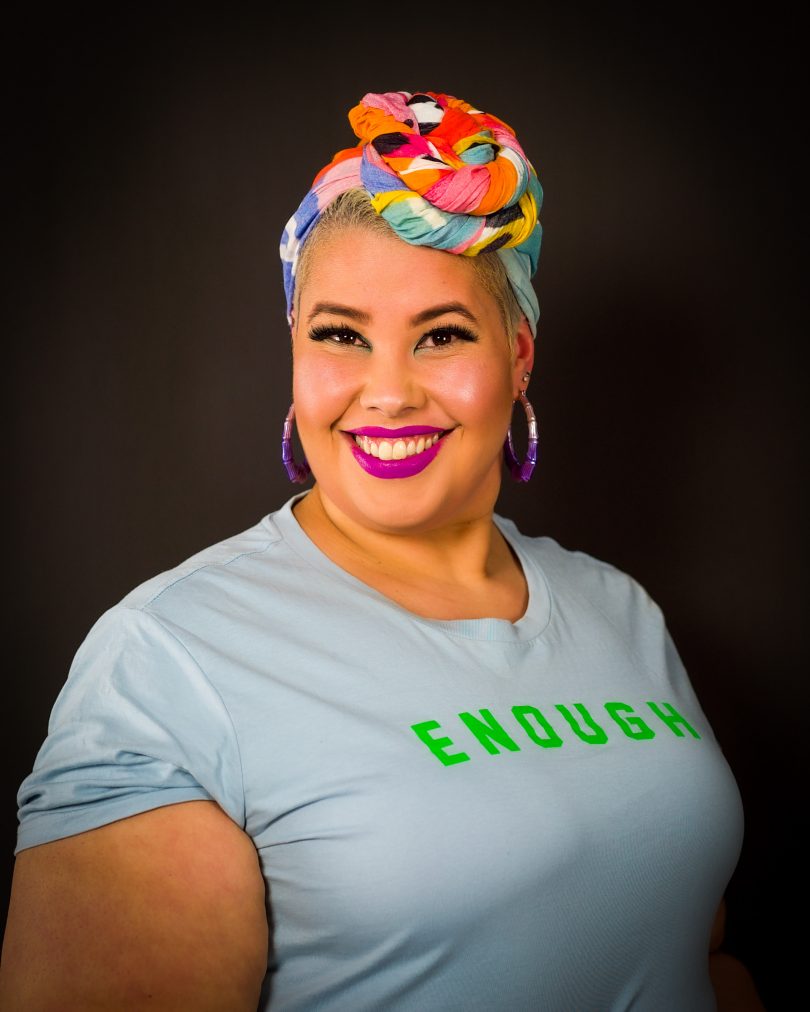 The Bodzilla helps others to love the skin they’re in by posting self-love and body positivity images on social media. Photo: The Bodzilla.

Ms Hélène-Horton believes campaigns such as Beach Please are surfacing because people like herself are using their social media platform to call out issues such as Australia’s diet culture, fatphobia and self-hate.

The Bodzilla, as April calls herself on Instagram, continues to show others how to love the skin they’re in by sharing photos that promote self-love and body positivity with her 21,400 followers.

“You can’t be what you can’t see,” the model aptly says.

ChrisinTurner - 16 minutes ago
Living in the inner north we now have to start planning to leave Canberra during SummerNats. Already the mufflers are being r... View
Opinion 12

jwinston - 21 minutes ago
harcm said “tim_c – what a load of rubbish you talk. What if your schooling was completely disrupted by domestic violence... View
Acton - 40 minutes ago
The money you are giving out of misplaced guilt to a street beggar is just funding their drug, smokes and/or booze addiction.... View
Mike of Canberra - 2 hours ago
So the problem with Jobseeker is that it’s insufficient for its recipients to live on. Well guess what folks - it’s not m... View
Community 140

Bill Gemmell - 27 minutes ago
Barbara Eglitis I was wondering how long it would take. Seriously, I had the Fowles St Park project in Weston in mind. Sugges... View
Barbara Eglitis - 32 minutes ago
Naturally occurring weeds, like the ones growing down the middle of Northbourne Avenue which looks disgusting??? View
Mark Slater - 48 minutes ago
Angie Drake The simple answer is, buy more mowers or employ more staff. It's not hard. View
Public Sector 172