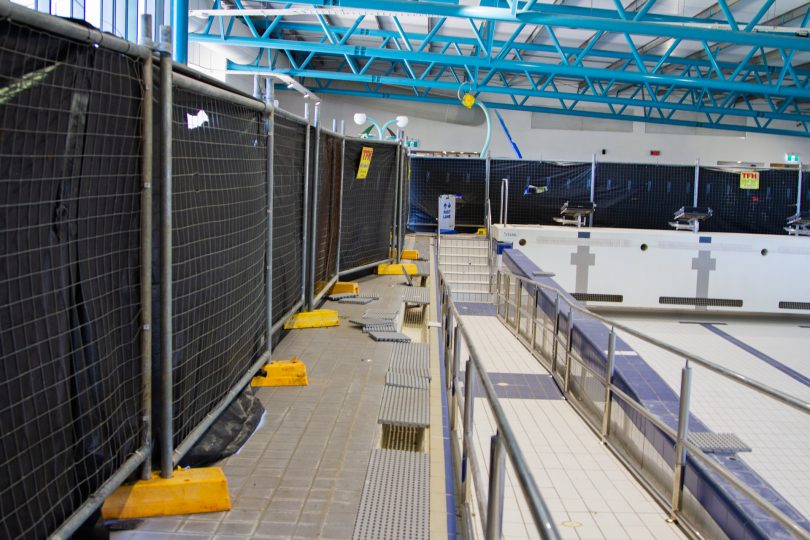 The ACT Government has moved to reassure Gungahlin residents that dust and debris from repairs on the Leisure Centre’s 50-metre pool will not impact them over the next nine months.

Kynetic, the company contracted for the repair works, will be responsible for safety on the site and is working on a hazardous materials management plan.

The plan will likely consider barriers to block dust between construction and other pools and use airflow to direct dust away from the public and other dust suppression activities, an ACT Government spokesperson said.

Concerns over silica dust contamination were previously raised during maintenance work at the pool in 2019 and resulted in a WorkSafe ACT inspector being called in.

While the report found that no silica dust was present, Liberal MLA for the Gungahlin-based electorate of Yerrabi, Leanne Castley, has criticised Sports and Recreation Minister Yvette Berry for not being transparent after only finding out about the incident this week via a freedom of information request.

“Minister Berry must immediately explain what’s been going on and guarantee that no worker has been or will be exposed to silica dust,” she said.

The documents also revealed that the render on the northern wall of the pool had failed in July 2019 and around 420 “drummy” tiles – tiles that emit a drum-like sound when struck by a sounding tool – were identified from a tap test on the pool’s floor.

Drummy tiles can indicate a lack of, or incorrect, adhesive, or incorrect preparation or application which can leave hollow voids.

Ms Berry has consistently denied a lack of transparency about repair works on the pool, saying she was not able to release details on advice from the government solicitor due to the government engaging in negotiations with the pool’s builder.

She said she would release the expert assessors’ reports on the pool and the agreement struck between the government and the original builder, ADCO, to show that there was nothing to hide but was waiting on advice from the government solicitor before doing so.

Ms Berry previously said that no major problems were identified with the pool prior to it being closed in 2020.

The pool was closed again in March last year due to COVID-19 and maintenance work was conducted.

Repairs worth more than $5000 were completed on faulty tiles in April but subsequent reports just months later found that all the pool’s tiles, levelling screeds and coatings would have to be removed to be repaired.