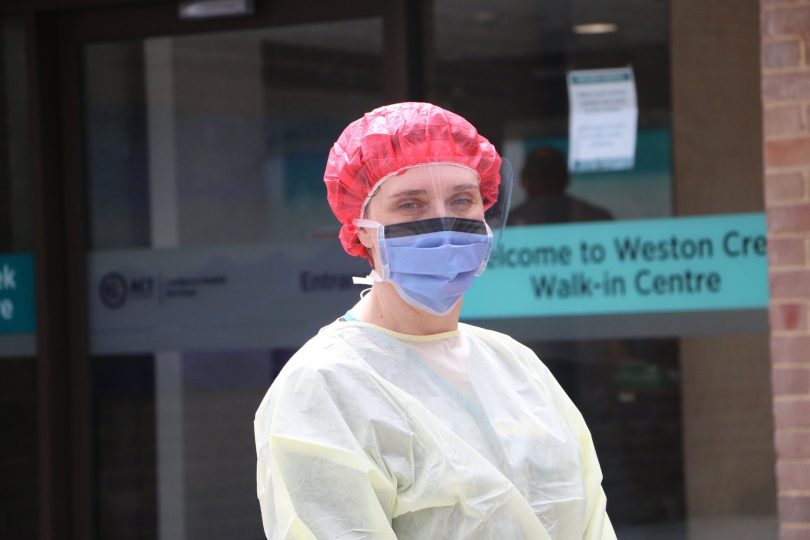 Anyone visiting from Melbourne is being urged to check for any symptoms and get tested. Photo: Canberra Health Services.

The ACT has imposed new measures on travellers from Victoria, and Canberrans have been told not to visit any of the COVID-19 hotspots and to reconsider any travel plans to Melbourne.

Anyone visiting the ACT from Victoria will have to quarantine in the Territory for 14 days at their own expense or return to their home jurisdiction at the earliest reasonable opportunity.

Passengers on inbound flights from Melbourne will also be asked to provide identification when they arrive at Canberra Airport.

The government says anyone who fails to comply with the direction may face penalties and fines.

Anyone already in the ACT who has been in a COVID-19 hotspot is urged to quarantine for 14 days from the date they left the hotspot, even if they do not have any symptoms.

In addition, anyone coming into the ACT from the greater Melbourne metropolitan area should closely monitor themselves for symptoms of COVID-19 and are urged to get tested for even the mildest of symptoms.

The government says Canberrans should not be planning on visiting any of the affected postcodes, and all non-essential travel to Melbourne should be reconsidered for the foreseeable future.

Chief Minister Andrew Barr said the Victorian spike was a reminder that the pandemic was far from over.

”It has a long way to run and this outbreak in Melbourne won’t be the only one in Australia in the months and possibly years ahead,” he said.

”With school holidays coming up, nobody from the ACT should be travelling to visit friends or family if they are in Melbourne.

”No one in the ACT should be inviting friends and family from Melbourne to come and visit.”

ACT Chief Health Officer Dr Kerryn Coleman said the situation in Melbourne was concerning and had evolved quickly in the past week.

It was a reminder of how quickly cases and community transmission of the virus could escalate and spread.

“COVID-19 cases have increased significantly, and this direction will help to protect Canberrans and our most vulnerable community members from the potential spread of COVID-19,” she said.

“We ask that people respect the direction and not travel to the ACT from the identified hotspot areas of Melbourne.”

She said health officials would greet travellers as they arrive in Canberra by bus, rail and air to cross-check their residential address with a hotspot postcode and ask whether they had been in a hotspot in the past 14 days.

Dr Coleman said the ACT would not conduct health screening as is being done in NSW, saying the evidence of its benefits was not strong.

She was confident that people would self-isolate properly and get tested if needed.

”I think Canberrans have demonstrated a very strong response to self-isolation and quarantine,” she said. ”We have had very good levels of compliance.”

So far 31,500 tests had been conducted in the ACT. Testing levels for international travellers in quarantine has been at 80 per cent or more, and many not tested were infants.

Dr Coleman said it was not expected that many Victorians would be among travellers coming to the ACT.

The current direction is in force until 29 July and will be reviewed at that time.

Mr Barr said the current health advice was that the ACT could still move to more relaxed Stage 3 restrictions next Friday as planned and the government will announce what that will look like on Monday.

It is now 26 days since the ACT recorded a new case.

Further information, including the list of affected Melbourne postcodes and testing sites in the ACT, can be found on the ACT COVID-19 website.

Ali Light Alasady - 42 minutes ago
Tani Buist LEGIT HOW LONG HAVE WE BEEN COMPLAINING ABOUT THE IDIOTS ON THE ROADS View
Jon Rooks - 49 minutes ago
Kathleen Julia Gill. I see both. The problem with these online debates is people keep making blanket, patently nonfactual sta... View
Forde AE - 1 hour ago
100 percent spot on. View
Breaking 15

Acton - 1 hour ago
Agree. Its broken. The only people who deny its broken are those whose powers of critical thinking are seriously deficient. View
Acton - 1 hour ago
The more we hear, read and know about AstraZeneca, in Australia and overseas, the more reason there is to hold off until Mode... View
whatwik - 2 hours ago
FWIW, wife woke next day after her first AZ with a fever and headache - responded very well to a Nurofen and a Panadol, and t... View
Opinion 13

Brindie - 2 hours ago
Given that our main roads are so congested (Tuggeranong Parkway; Adelaide Avenue) and that our public transport system is so... View
Ol L - 3 hours ago
Canberra. If the traffic gets bad just put in more traffic lights, that’ll work real good…..check out Hindmarsh Drive Phi... View
Deepak Ramanath - 4 hours ago
James Forge Wow, where is this? View
Food & Wine 10

@The_RiotACT @The_RiotACT
Canberra's surging house prices mean couples are taking longer to save for a deposit, and are being forced to lower their aspirations, according to a new report https://t.co/DmpeMwLcDP (4 hours ago)