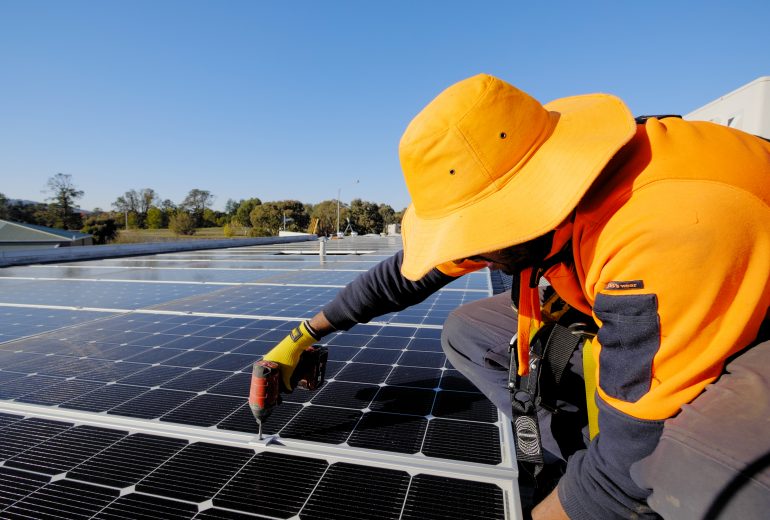 The rooftop solar industry and its customers have been waiting for the ACT Government’s Sustainable Household Scheme to commence. Photo: SolarHub.

Rooftop solar has long been on the list for Sue Chong as she renovates her Chapman property, but the ACT Government’s Sustainable Household Scheme has elevated it to no-brainer status.

Ms Chong is one of the lucky 100 people selected for the month-long pilot, after which the green loans scheme will be open to all-comers.

The ACT Government announced on Thursday, 15 July, that the scheme, which will offer interest-free loans up to $15,000 with a 10-year repayment term for a range of green energy products, is getting underway.

Ms Chong is an unabashed fan of the government’s green initiatives after its ‘energy guys’ at Actsmart helped cut her energy consumption by 20 per cent, and its gas conversion scheme helped her upgrade to an electric reverse-cycle air-conditioning system.

“I probably should have done it [installed rooftop solar] a lot earlier but this initiative really helps people get onto it,” she said.

Would she have gone ahead without the initiative anyway?

“This has definitely given me a booster. It was a no-brainer after I got onto the trial.”

“I could probably power the whole neighbourhood,” she said.

But Ms Chong will probably hold off on battery storage for now, as they become cheaper and more efficient.

The ACT Government has finalised a loan provider for the $150 million, five-year scheme, which will roll out in two phases – the first being for rooftop solar, battery storage, electric vehicle (EV) chargers, electric reverse-cycle heating and cooling systems, hot water heat pumps and efficient electric stove tops; and the second for new and used electric vehicles.

An ACT Government spokesperson said the pilot will run for around a month to allow the government to test and refine the system with a small group of Canberrans, suppliers and installers before it opens to all eligible households and individuals in the coming months.

People would likely be able to apply for loans to buy an electric vehicle in the last quarter of 2021.

The spokesperson said it is difficult to predict how quickly loans will be taken up, being a new type of program for the government.

“Evidence from other loan schemes in other states is that there will be a small surge at the start followed by steady uptake over time,” said the spokesperson. 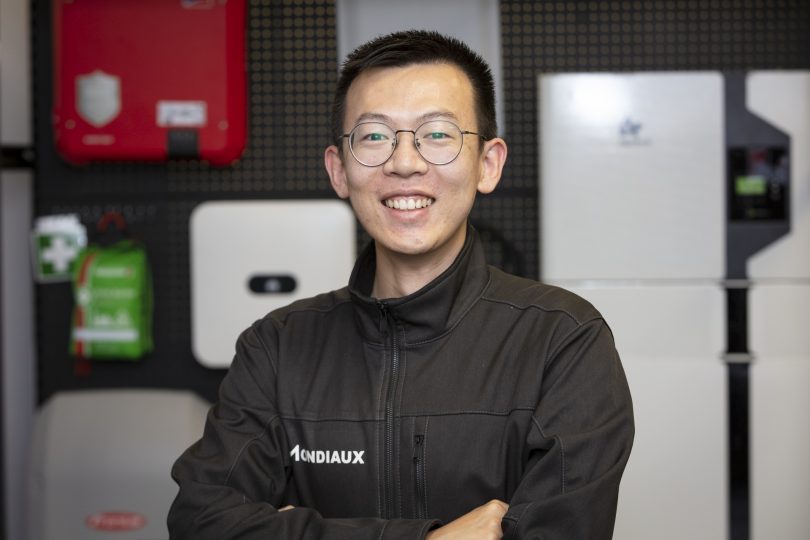 Mondiaux Solar operations manager Howard Lian says half of the company’s customer enquiries this year have been from people wanting to use the Sustainable Household Scheme. Photo: Mondiaux Solar.

“The government will continue to assess the scheme as it rolls out, including the potential need to bring funding forward from the later years.”

Solar panel providers who have been waiting for the scheme since the ACT election are pleased to see it finally starting.

Both SolarHub and Mondiaux Solar said they have taken plenty of enquiries from people waiting for the scheme before they committed.

SolarHub CEO Benn Masters said the industry, particularly those solely based in Canberra, took a dip as customers bided their time, but it would definitely rebound with the scheme starting up.

Mondiaux Solar operations manager Howard Lian said about half of the company’s customer enquiries this year have been from people wanting to use the scheme to finance a solar array and/or battery.

He said demand has come from across the ACT, and is driven by a mix of environmental concern and a desire to cut electricity bills.

Most customers are aged younger than 40, with older ones showing more responsibility towards combating global warming.

Mr Masters said the clincher is the 10-year repayment term which makes the purchase economically viable.

“Allowing you to pay it off over 10 years and without any interest incurred, the saving you will make putting in the solar system will outweigh the actual payments on the loan,” he said.

“Essentially you end up cash-flow positive, which means for a lot of homeowners it takes out that barrier.”

Mr Masters said the $15,000 limit is sufficient and would cover the cost of a PV set up and a battery.

He said demand for batteries is ticking along at about five to 10 per week, but that the product is still in the early adopter phase, “but its coming”.

“There is a lot of interest in batteries because people want to be more autonomous, they want to be able to store that solar power at night, and have back-up in case the grid goes down,” said Mr Masters.

I'd love a scheme which helped me improve the energy efficiency of my house. I've had a massive gas bill last quarter trying to keep my leaky, poorly insulated house warm. I'd much rather be pumping money into double glazing and insulation.

Vasa Krculj - 41 minutes ago
Yep, definitely the court jester. View
Anne Nieuwenhuys - 1 hour ago
Jules Anne well said. Exactly what he is. Cannot even watch him play tennis. View
John Geale - 3 hours ago
Alex Nichols McEnroe was called an idiot also and still is to this day. But McEnroe could actually play. View
News 23

chewy14 - 47 minutes ago
Can't remember when anyone said anything about compulsory flu booster shots? We are talking about Corona Virus, which is sign... View
Acton - 2 hours ago
The chief executive of Pfizer has said that it is likely people will need a Covid jab every year going forward. “Both wanin... View
Tory Svend Christensen - 10 hours ago
Rebecca Stones interesting View
Community 15

Capital Retro - 1 hour ago
Perhaps the Brisbane Line and the Australian Frontier Wars are not a good comparison although both of them never happened and... View
Spiral - 2 hours ago
One aspect of Australia's history that appears to be completely overlooked is the conflict between indigenous groups before c... View
News 2

candlelit - 1 hour ago
I agree but (a) we need to think more about the kinds of eucalypts we plant (and having lost power for four days earlier this... View
Acton - 2 hours ago
Nonsense. The author negligently fails to acknowledge that gum trees are more prone to catching alight because of their oil c... View
News 222

Acton - 2 hours ago
The idea of differing fines for the same traffic offence is just as stupid as introducing differing prison sentences for thos... View
Patrick Fischer-Reid - 4 hours ago
Steven Miller If the crime is the same, surely the penalty should be designed to have the same impact and the same deterrent... View
Mirjam Herzog - 11 hours ago
Maybe a "credit" of 2-3 low range (say, under 10k over the signposted limit) per 5year licence and the current fines for ever... View
Community 11

kenbehrens - 11 hours ago
Sam & Malcolm, I'm not sure this article was about public transport. It seemed to be about a development application, that sa... View
show more show less
*Results are based on activity within last 7 days

Is it worth adding a battery to your home’s solar system?

@the_riotact @The_RiotACT
#Canberra's great #trees are a risk worth having, and managing, even if measures need to be ramped up, writes Ian Bushnell https://t.co/qT6gUBtdQn (2 hours ago)

@the_riotact @The_RiotACT
It's all happening in Australia, from tennis and cricket to the Hottest 100. Have you been keeping up with the #news? Put your knowledge to the test with this weekly #quiz with a #Canberra spin https://t.co/QrO0RV2PWR (12 hours ago)

@the_riotact @The_RiotACT
It's all happening in Australia, from tennis and cricket to the #Hottest100. Have you been keeping up with the news? Put your knowledge to the test with this weekly quiz with a #Canberra spin https://t.co/8FCdfvIOxn (12 hours ago)