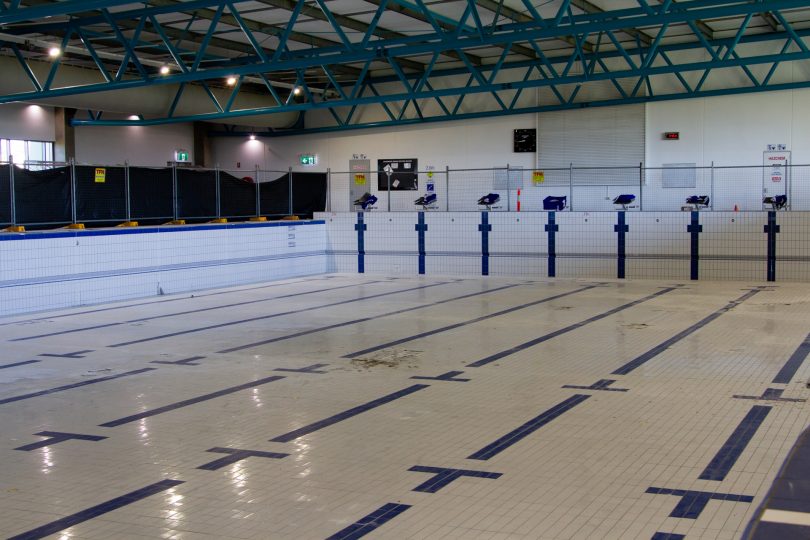 The 50-metre pool at the Gungahlin Leisure Centre has had its reopening delayed yet again. Photo: Dominic Giannini.

The reopening of the 50-metre pool at Gungahlin Leisure Centre, tentatively scheduled for the end of the summer, has been delayed again into “mid-2022”.

In a statement from ACT Sport and Recreation, a spokesperson revealed that “current COVID-19 restrictions have impacted resourcing for the project”, and hopes of a reopening by the end of summer have been dashed.

The pool was closed when leaks were discovered in mid-2020 while undertaking regular maintenance. This is the second consecutive summer the pool has been out of action.

READ ALSO Dreaming of a tree change but need to stay close? A hidden gem awaits

An ACT Government spokesperson said they could not provide a timeline for the pool’s reopening. However, the spokesperson said works were progressing and a formal announcement would be made when it was confirmed.

President of the Gungahlin Community Council Peter Elford understands the added pressures created by the pandemic on the construction industry but could not deny it was news he found “incredibly frustrating”.

“I get that because of COVID, everything is delayed. It’s a very common message. I think everyone in Gungahlin, everyone in Canberra, and everyone in the world is dealing with it,” said Mr Elford.

“However, there remains an ongoing, deep sense of frustration about the delay in the context of a whole bunch of other things in Gungahlin, in terms of a lack of services, and community and recreation facilities.”

While he acknowledged that he supports the government’s approach to take the “long option” and strip the tiles back entirely and make sure the issues are corrected properly, he wasn’t happy with the information flow from the ACT Government.

“The biggest frustration has been a lack of communication and clarity around what’s happened. Once it has happened, there’s a whole bunch of recrimination and frustration around how this was let to happen,” said Mr Elford.

“But, it’s definitely not a two-year job. It took a long time to recognise that there was a problem.”

Of some optimism is the accompanying news that hydrostatic testing of the pool shell was completed over the holiday period. This involved filling the pool with water and letting it sit to test for leaks. The ACT Government is satisfied with the test results and is now preparing the pool shell for tiling works.

At the Budget Estimates for Sport and Recreation in late October, the government also flagged acoustic and lighting upgrades at the pool with a budgeted cost of $365,000. This came after some of the pool’s main user groups approached Minister for Sport and Recreation Yvette Berry before the pool’s closure, raising concerns about both the high noise levels and low visibility within the building.

Obviously the vibrations of the heavy light rail damages pools.

Yes of course they are unrelated. I’m just jumping to conclusions using a similar level of analysis as that displayed by the proponents of tying traffic fine amounts to the offenders income.

Add this to the long and growing list of government failures. It’s quite obvious they do not care anymore. They focus on legalizing ice, putting up monuments to themselves andrenaming offensive street names over basic public infrastructure.

That’s what happenes when u accept the cheapest quote

Shawn Wilson what did you do

Hey, but they can catch the tram to the Civic pool.

If they hired online school tilers, they would do better job

Yeah. I mean there was a section of tiles that used to fall off the side regularly, and they had the wrong colour adhesive some guy told me, so the water could’ve got in and cracked it from that☹️

Let’s not fix this and built a tennis court instead

At least you can catch the light rail into civic to voice your concern?

Chris Landsmann Estelle will not be pleased.

Kellie Landsmann I’m not either

Smallest Police Force in the Country, Longest Hospital wait times in Australia, long grass, pot holes, housing in crisis / homelessness, escalating rates fee’s and charges, a $1.5 Billion tram that’s haemorrhaging money and plans to raise London Cct and spent $2.0 Billion building more tram lines to replace busses we already have… and now we can add to that the pool has no water in Gunghalin..!!

This government has only had 20 years to get it right

Michael Ahern yep, when they got the place 20 years ago Canberra was probably the best kept secret in the country, now its a poor cousin that spiralling into massive debt..

Lived in Canberra 38 years.Left 12 years ago. Been back few times.Always go away feeling sad because of changes.Progress can be so ugly.

That pool complex is not that old. Instead of blaming covid, how about blaming what was obviously poor workmanship when it was initially built.

Avril Pounds this is not the first time either. Back 3 or 4 years ago it was also closed for 6 months for re-tiling as the original tiles kept falling off as well.

Avril Pounds the poor workmanship is what was blamed, they have to replace the tiles due to that.

At least they have a tram

Bloody waste. What about the cinema?? V

🤣🤣🤣🤣 just come down south. We have a great pool down here no leaks.

Of course it is.