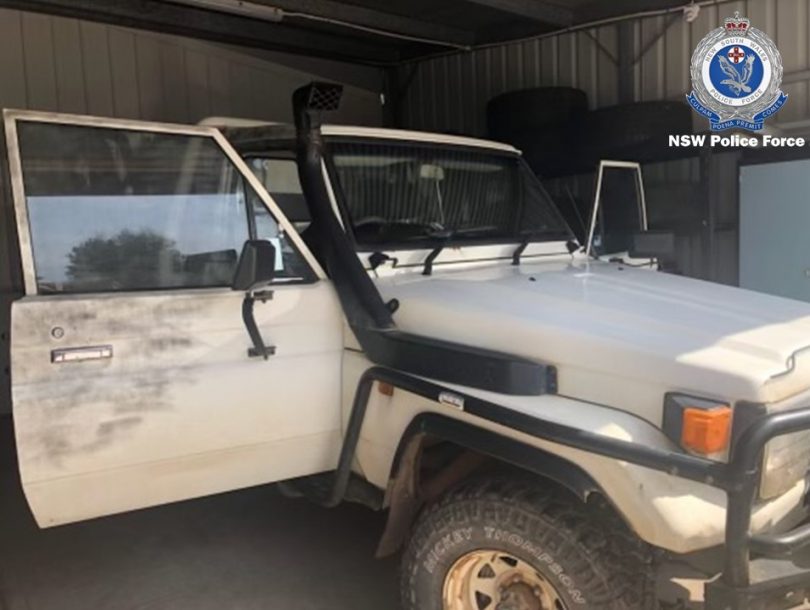 Police have appealed to those responsible for a hit and run that has left a young Cooma police constable in hospital with serious head injuries to hand themselves in.

“The clear message is, this is a low act that you were involved in,” Assistant Commissioner Joe Cassar said. “It’s not going to get any better.

“Man up and come and present yourself to police.”

The incident happened at about 8:20 pm on Monday, 30 August 2021, when officers from the Monaro Police District were in pursuit of a stolen utility on the Monaro Highway, Nimmitabel, near Cooma.

The utility stopped just outside of Cooma, and the driver got out of the car and fled on foot.

The police vehicle also stopped, and a male officer got out of the car and gave chase on foot.

The fleeing man was then seen getting into a small white sports car type sedan, before that car allegedly struck the officer and left him lying on the ground.

The Senior Constable suffered serious head injuries, including a fractured skull and bleeding on the brain, and was airlifted to Canberra Hospital, where he remains in a stable condition.

“It’s a very serious situation,” Assistant Commissioner Cassar said. “This is a young senior constable. He’s a married man, he’s father of two young people who still live in the Cooma area. This has a significant impact on his peers, his family and the community … it’s a chain reaction.

“We are very grateful he is still with us … he has our prayers and our full support.”

Assistant Commissioner Cassar said NSW and ACT Police would be using the full weight of both jurisdictions to find the people responsible for “this horrific event”, and appealed for anyone with dash cam footage or any knowledge to come forward.

With a mountain of forensic evidence in the stolen utility, police are confident of tracking down the offenders.

“We have at least two people at large,” he said, “the offender in the stolen vehicle and the second offender who was responsible for hitting the officer. We are lucky it’s not a fatality.”

A crime scene has been established as investigations into the incident continue by officers from Monaro Police District.

The police are also providing support for the young female officer who was left alone supporting her colleague while waiting for medical assistance.

“It was a traumatic experience, not only to witness the incident but to be the only one left standing there to render first aid,” the assistant commissioner said.

David Rose - 7 hours ago
We should get the band back together, cobber. But let me get some thermal underwear first... View
Dale Brittain - 7 hours ago
As the ex-Marketing Manager for the GMC400/Canberra 400, all I can say is that it will need lobbying to Canberra’s ultra-co... View
Rory McQuinn - 7 hours ago
Darin Mulcaster Darin, it would be a very quiet race.... View
News 29

Gary J Potts - 7 hours ago
Margaret Lay It was Gowrie Private Hotel, and was one of places for newly arrived APS staff. View
Gabriel Spacca - 8 hours ago
Steve Herczeg 6 months. But that’s because a) I was a glutton for punishment, and b) I’m antisocial and didn’t want to... View
Ashlee Betteridge - 9 hours ago
Oh so they are turning it into a quarantine facility? Which could then be reconverted back to privately operated student acco... View
News 9

chewy14 - 8 hours ago
Kenbehrens, Barr's statements and documented roadmap are fundamentally at odds with the National Plan. The Vaccination target... View
whatwik - 10 hours ago
And you are not the only one - the Riotact's poll is currently giving him 70% support. View
Oscar Mike - 10 hours ago
I just don’t trust Pfizer this is due to their decades long history of fraud and corruption and the fines to show it. View
News 18

Bethany Roberts - 8 hours ago
Selina Frances 😁 this is why you don’t plant tomatoes until after Melbourne Cup View
Sarah Young - 9 hours ago
It’s bloody awful, no picnics I this weather!! View
Community 10

TimboinOz - 10 hours ago
I don't need a cookbook to roast meat. You need a VERY HOT oven or 60CM Weber Charcoal BBQ and a meat thermometer, And then c... View
Opinion 57