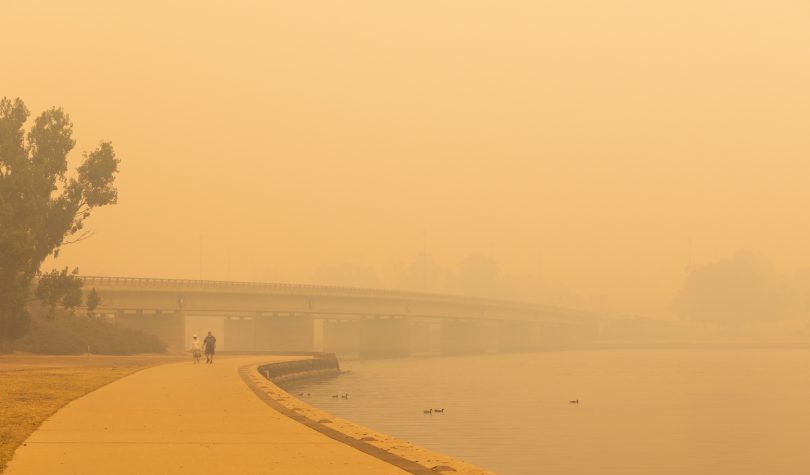 Any form of exercise is difficult under the current conditions in Canberra. Photo: Supplied.

The acrid, toxic air in Canberra has made day-to-day living in the city a challenge. To exercise or train in these conditions is almost impossible. So it’s no surprise that the poor air quality in Canberra has resulted in teams relocating or postponing home games and training.

The Brumbies have moved their training-base from Canberra to Newcastle for at least the next ten days because of the hazardous air quality created by the bushfires.

There’s also the possibility of another dilemma if the air quality in Canberra and other impacted areas doesn’t improve over the next three weeks with the Brumbies scheduled to play a trial against the Melbourne Rebels in Albury followed by their first Super Rugby game of the season on 31 January against the Queensland Reds at Canberra Stadium.

The Raiders are set to move their training-base north to avoid the conditions as their pre-season moves into full swing.

We have already seen the impact of smoky conditions on sporting events in the ACT with the abandonment of the Big Bash game between the Sydney Thunder and the Adelaide Strikers on 21 December after a thick layer of smoke blanketed Manuka Oval.

There is another Big Bash game scheduled for Manuka for January 15 with the Thunder playing the Renegades. No doubt Cricket Australia will be closely monitoring conditions in light of what happened in December.

United don’t have another home game scheduled until 16 February with two matches in Melbourne, two byes, and the international window.

The Canberra Tennis International was forced to relocate to Bendigo and a swimming training camp scheduled for the AIS was called off.

The air quality, if it doesn’t improve, could have further ramifications for Canberra sport with the Summer Down Under Track and Field event set down for 20 and 21 January at the AIS, followed by the Canberra Track Classic on February 13.