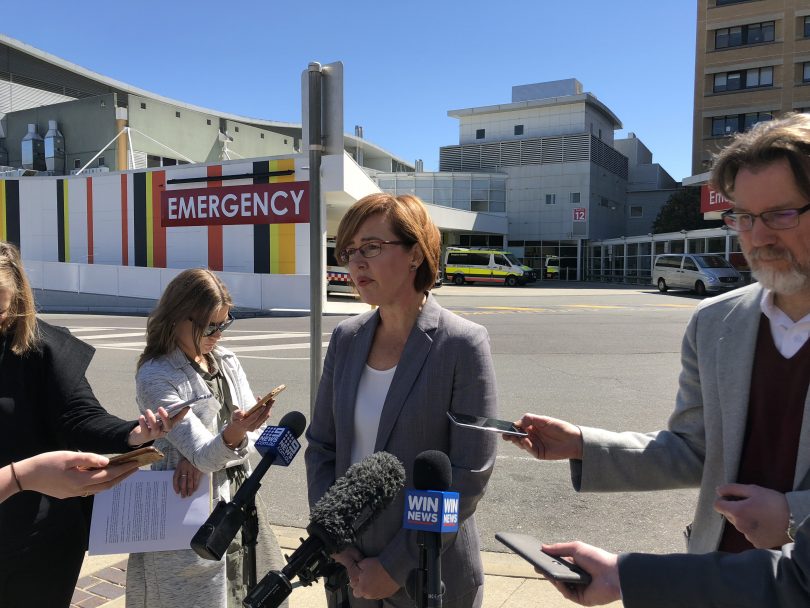 A former Director-General of Queensland Health will chair the independent panel to lead an Independent Review into the workplace culture of ACT public health services.

Health Minister Meegan Fitzharris today announced the members of the panel who will oversee the six-month Independent Review, as well as the Review’s Terms of Reference, saying she was confident that people could come forward safely under protections in place.

But the Canberra Liberals, who have called for a full Board of Inquiry, remain unconvinced, saying there is no satisfactory legal framework to underpin the Independent Review.

Ms Fitzharris said the panel would decide whether there would be public hearings or not, and she expected ACT Health officials, who are obliged by under the Public Service Management Act to appear before hearings, to cooperate.

“The independent panel will be tasked with making a range of decisions about the conduct of the review, ensuring the privacy and confidentiality of submissions, and whether there will be public hearings or not. This is appropriate to ensure the independence of the review. The panel will also be given appropriate secretariat support to assist throughout this process,” Ms Fitzharris said.

But the Minister said she was concerned about the impact of the spotlight on ACT Health and said there should not be trials in the public debate about individuals and constant commentary about the work of ACT Health.

“This does not reflect on the work at Canberra Hospital or Calvary Public Hospital,” she said.

Ms Fitzharris said procedures would be in place to protect the confidentiality and privacy of individuals who make submissions, and those who may be the subject of complaints to ensure
procedural fairness.

Protections for staff would be carefully managed by the Independent Panel, and be enacted under existing legislation including the Privacy Act, Public Sector Management Act and Fair Work Act.

“Staff within our ACT public health services, whether at ACT Health or Calvary Public Hospital, should feel confident to come forward through this process to offer their thoughts, concerns and experiences so we can learn, heal and improve our workplace culture,” Ms Fitzharris said.

“I look forward to receiving the panel’s findings and recommendations to government, and making the changes necessary to continue to build a positive culture within our public health system.

“What many people have told me is they want this process to be an opportunity to learn and improve and build a high performing health system to better serve our community. I am absolutely committed to this shared goal.”

Opposition Health spokesperson Vicki Dunne said that without the legal protections provided by the Inquiries Act 1991, witnesses and the panel members remain vulnerable, and the review panel will be limited in powers.

“There are no mechanisms to protect participants, take evidence, and compel witnesses,” she said. “The Minister has provided no guarantees that witnesses appearing before the panel will have the same protections as a witness proceeding in the Supreme Court.”

The Terms of Reference focus on whether there are any systemic and institutional issues in the ACT health system, and claims of inappropriate conduct and behaviour.

The panel will look at what responses there should be to complaints and decide whether they should be referred to any other authority.

It will examine and report on the existing workforce policies and complaints management practices and make recommendations for improving workforce culture across the ACT public health system and what additional support systems are needed for staff and management, including training and professional development.

The panel will provide an interim report to Government by 31 January 2019, and a final report by 30 March 2019, both of which will be made public and tabled in the Legislative Assembly. The Government will respond to the final report within three months.

Ms Fitzharris welcomed the input of doctors groups including the AMA.

“I really welcome their input, I welcome their engagement in this process, it will be important. I hope they say to their members that they are all welcome to make submissions, they will all be protected,” she said.

But the AMA, which had also called for a full Board of Inquiry, said significant hurdles remained.

“Quite frankly, it doesn’t matter how good the terms of reference are, if there isn’t a clear legal basis for the review and comprehensive protections for witnesses then community members and staff will have to think very carefully about participating. I also think that’s true for our members,” AMA (ACT) President, Dr Antonio Dui Dio said.

Dr Dui Dio said the Board of the AMA (ACT) would meet over the weekend and respond in detail on Monday.

Ms Fitzharris said improving workplace culture and staff engagement within our healthcare system had been a significant priority for the ACT Government, with a number of positive changes made in recent months including full accreditation of ACT Health and the Canberra Hospital for the maximum three years.

“We need to harness this momentum to build on these achievements and that is why, after extensive discussions with a wide range of people, I have established an Independent Review to investigate and report on the workplace culture as it relates to ACT public health services. This is the best process to learn, heal and improve,” she said.

Mr Reid’s career in health spans four decades and he recently spent three years as the Director-General of Queensland Health. As a consultant, he has worked on a broad range of issues including healthcare workforce reform, clinical engagement and performance analysis. He has also provided mentoring services to many people engaged in senior positions within the health sector.

Ms Brew has a background in nursing, and has been a senior health executive for more than 10 years. Her biography says she is a passionate advocate of education for health professionals and workforce innovation, and that she understands the complex relationship with VMOs and other staff who are not permanently based or employed, and how the nursing culture can positively or negatively affect that and patient outcomes.

Professor Watters is a Professor of Surgery at Deakin University and works at Barwon Health and the University Hospital Geelong. He has a strong interest in workplace culture and professionalism issues across the health sector, and was the President of the Royal Australasian College of Surgeons from 2015 to 2016.

Kim F - 5 hours ago
This is another example of the Police asking for asssitance ages after the event. Bizarre ! View
franky22 - 9 hours ago
ACT Policing are a joke and hopelessly inefficient. This request for public assistance should have been made within days of t... View
News 7

A Nonny Mouse - 6 hours ago
There are EV charging systems that vary the charge rates to vehicles to avoid overloading a limited supply. These systems can... View
Capital Retro - 22 hours ago
One comment on this thread was the Australian Electric Vehicle Associate has given advice to the ACT govt. on its policy that... View
Heavs - 1 day ago
Five superfluous words in that last sentence. View
News 1

Spiral - 10 hours ago
I agree that red light running is a huge problem. I see people speed up to make it through a "just red light" and even people... View
Startmeup - 11 hours ago
The most common danger I notice driving around is red light running (which usually involves speeding up or at the very least... View
Opinion 33

russianafroman - 1 day ago
Terribly underfunded. Around Gungahlin it's hip height. There should be double or triple the amount of mowers. It's not justi... View
News 33

The village feel is back in ‘Old’ Kingston! The beautiful suburb with its luscious treescapes and green spaces has been...
ACT Election 2

The ACT Attorney-General in the last Assembly, Gordon Ramsay, would lose his seat in the Belconnen-based electorate of Ginninderra to...

@The_RiotACT @The_RiotACT
Blackbird is a subterranean den in the Sydney Building that'll transport you to speakeasies and into the light of a dark black night https://t.co/qvGGsfI2Zs (23 minutes ago)

@The_RiotACT @The_RiotACT
It's one month since a young man died following a brawl at a Weston skatepark, and after an exhaustive investigation, an arrest is imminent https://t.co/52cGdcXW6o (2 hours ago)