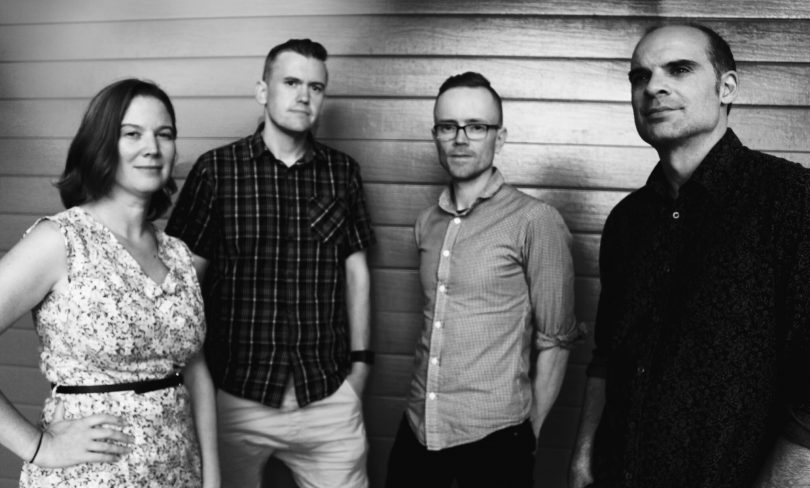 Traditional Irish folk band Trouble in the Kitchen from Melbourne is celebrating its 20th anniversary at the National Folk Festival. Photo: Supplied.

Canberra’s annual Easter folk music extravaganza kicked off on Thursday evening with a memorable Opening Concert on the Budawang stage showcasing a range of musical styles on offer over the weekend.

Australian’s premier traditional Irish band, Trouble in the Kitchen, closed the show in foot-stomping style in what is their 20th year performing together.

The concert opened with Belgian band Wor, who wowed the crowd with their collection of Flemish tunes and incredible musicianship.

The curiously named Velvet Sledgehammer filled the hall with their beautiful a cappella harmonies.

This year’s Lifetime Achievement Award was presented to Sydney Irish dancing couple Bill and Margaret Winnett for their significant contribution to enriching folk music and culture in this country.

EPIC is now a bustling village of artists, music lovers, vendors and the volunteers who keep the National Folk Festival running smoothly over its five-day duration.

Warm, fine weather is forecast for the Easter weekend to match the hot gigs taking place across the EPIC venues and impromptu street and sessions performances.

As well as the traditional opening night concert at the Budawang Pavilion, for the first time there were opening night performances at The Majestic, with Kaurna Cronin and the Colonel Lights, Jugularity, Mick Thomas and the Roving Commission, and The Royal High Jinx kick-starting the Festival.

Other venues warmed up as the many food and market stalls did steady business.

Among a stellar line-up, Festival picks include Elephant Sessions from Scotland, Susan O’Neill from Ireland, Monique Clare and Belshazzar’s Feast from the UK, a delightful and quirky act with fine music interspersed with comedy.

The National is a genre hopping affair with a broad range of folk idioms on offer, including Celtic, bluegrass, old time, roots, blues, jazz and other national music. There is something for everybody.

While the music takes centre stage, the National is much more, with master classes, street performers, circus, poetry and dance, as well the market and party atmosphere.

This year local artist Ann McMahon is leading a collaborative weaving project that will result in an installation of globes spilling from a life-size boat woven by the artist. Festival goers can also learn traditional crafts such as knitting, crochet or beading.

You can also join the lantern makers who create stunning paper and bamboo sculptures and lanterns, which are then lit at night and carried throughout the Festival in the Grande Parade on Sunday night.

For those who want to move to the music there are all kinds of dance workshops and events. On Opening Night Festival goers danced through the ages at the Welcome Dance with the Earthly Delights Historic Dance Academy. On Friday night, people kicked up their heels at the Scottish Ball in the Coorong Pavilion. The Heritage Ball is on Saturday night in the same venue. On Monday afternoon, there will be a Bush Dance and the Farewell Contra Tea Dance.

For a different experience you can take The Challenge, an interactive game providing some fun ways to interact with our Festival and its community by participating in a range of different tasks. Participants can take the Challenge for just a day or get involved over the whole weekend.

There are shuttle buses from the main gate opposite the general parking area to save the long walk down to the venues.

For more information including the Festival program go here.

Arleen Stark - 45 minutes ago
That is all very well Ian, but a branch does not have to be dead to fall. We have had 3 huge branches fall in the last 2 year... View
Colleen Whichelo - 2 hours ago
The trees need to be in the bush where they belong & where no humans reside. Bloody gum trees are the worst most dangerous of... View
Ulrich Belcher - 10 hours ago
Took a full 3 years to have a council tree inspected after I lidged the job and chased it up many times, even though it was a... View
News 240