Heyman and Carpenter named in Matildas’ squad for Asian Cup 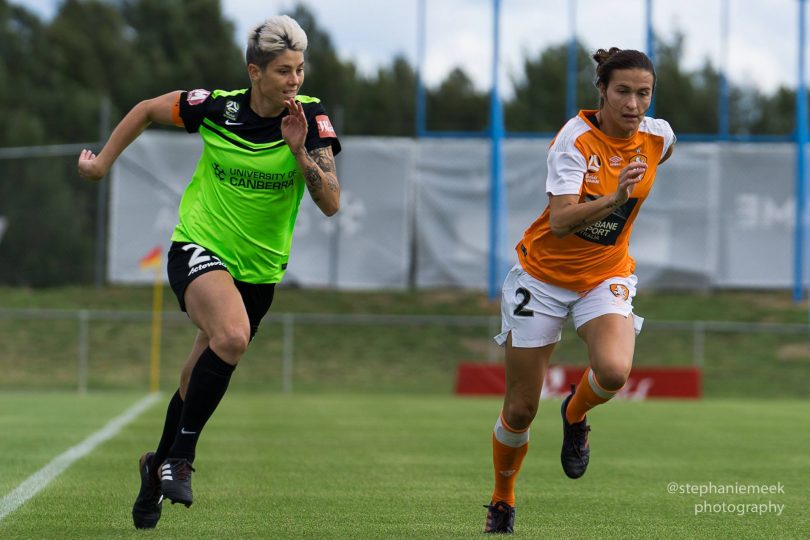 Canberra United stars Michelle Heyman and Ellie Carpenter have been named in an experienced Matildas’ squad for the 2018 AFC Women’s Asian Cup in Jordan next month as they aim to lift the Asian Cup trophy for the second time in their history.

Head coach Alen Stajcic’s final 23-player squad for the Asian Cup was announced on Monday as the team start a two-week training camp in WA.

The Asian Cup will also serve as Asia’s qualification process for the 2019 FIFA Women’s World Cup which will be held in France.

The strong Australian side will enter the tournament with a wealth of international experience at their disposal with the 23-player squad having 1,108 ‘A’ international caps between them, at an average of just over 48 caps per player.

Stajcic is looking forward to the upcoming tournament and believes the players are focussed on the challenge ahead.

“The AFC Women’s Asian Cup is the major tournament on our calendar this year and will also be serving as a FIFA Women’s World Cup qualifier so there is plenty at stake,” Stajcic said.

“Looking to the tournament, we certainly do not underestimate any of our opposition. The Korea Republic have made great improvements in recent times and Japan are the defending champions so there will be definitely no complacency on our part.”

Heyman and Carpenter were important pieces in Heather Garriock’s Canberra United outfit in Season 11, with Heyman reaching two milestones as she made her 100th Westfield W-League appearance and scored her 50th Canberra United goal.

Carpenter continued to blaze a trail as one of the best young footballers in the country, with the 17-year-old awarded Canberra United’s player of the year.

The Matildas will play Japan, Korea Republic and Vietnam in Group B of the 2018 AFC Women’s Asian Cup, with the top five teams at the tournament qualifying for the 2019 FIFA Women’s World Cup.

Michael Hardy - 18 minutes ago
it needs to be moved View
Më Batterbury - 5 hours ago
I think 50 is ok but 40 is just ridiculous View
Jazzy Dhooria - 5 hours ago
You voted them in... Just sayin View
Property 1

JS9 - 2 hours ago
Any actual evidence to support a claim of a 'mass exodus' to Queanbeyan to shop? There must have been some either exceptional... View
chewy14 - 2 hours ago
JC, I asked how this was in ways different to the National Plan as you claimed. I agree with you that the quick changes that... View
HiddenDragon - 4 hours ago
In the cosily predictable, symbiotic ecosystem which is the ACT politico-media complex, the unambiguously critical lead story... View
News 5

jorie1 - 5 hours ago
Are you sure that it is current renters buying properties? The research I have read shows that many people who rent will do s... View
jorie1 - 5 hours ago
Hi Assiduous, I do agree that $500 per week is a lot of money - but the majority of that money goes to the ACT government in... View
assiduous - 5 hours ago
$500 per week is not low - it is enough to build a modest detached family home every 10 years. It is a reflection of Australi... View
show more show less
*Results are based on activity within last 7 days