High spirits in the Jingera hills 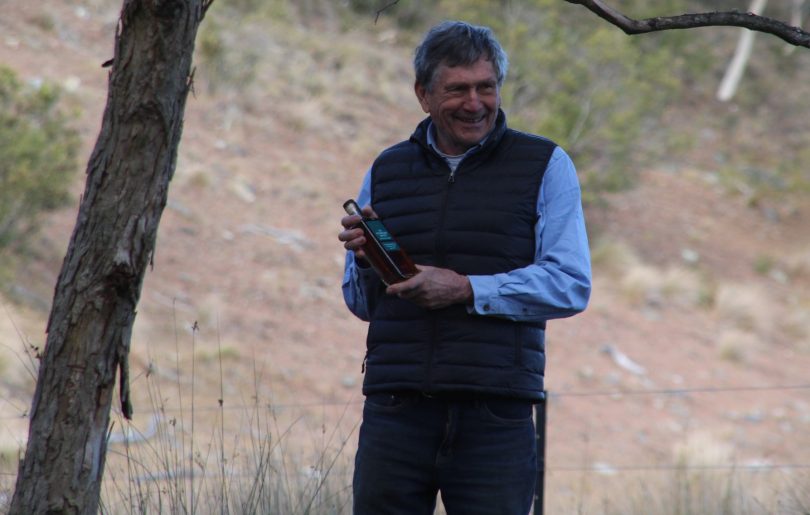 At the head waters of the Molonglo River, in the hills of Jingera not far from Captains Flat, a small distillery is producing fine Whisky. The Riverbourne Distillery is the passion of former Canberra pharmacist Martin Pye.

Taking on distinct character of the local environment, the river and rain water play an important part of the end product.

Before heading down stream to Lake Burley Griffin, the Molonglo is fed by natural springs at an altitude of 1000 metres – an environment akin to many areas of Scotland.

Having moved out to the Riverbourne property ten years ago, Martin and his wife Eileen Moriarty have been busy with cattle, goats, chooks (Long Paddock Eggs) and dogs (Eileen organises the Trans Tasman Working Dog Trials in Bungendore.) Both come from farming backgrounds and are interested in locally made produce.

Not one to be idle in ‘retirement’, Martin established and licensed The Riverbourne Distillery in 2015 and laid down his first barrels in 2016. 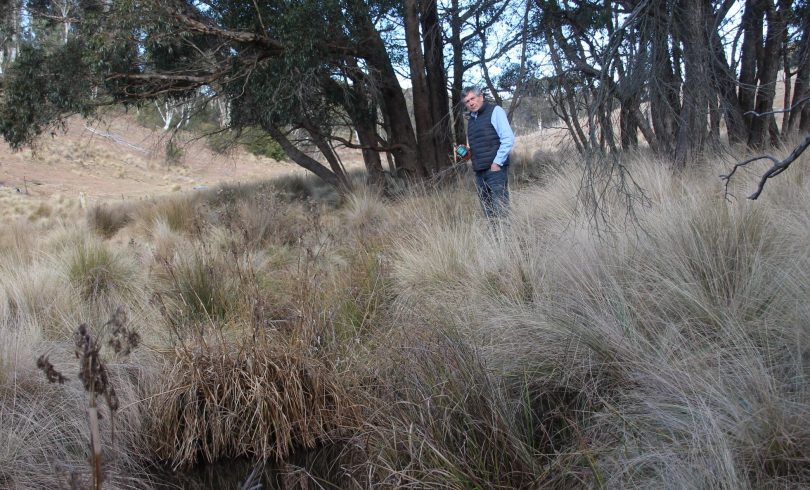 Martin Pye at the headwaters of the Molonglo River.

It was after a trip to Tasmania, the spiritual home of Australian Single Malt Whisky, that Martin decided to launch his own distillery, crafting world class whisky, rum and other spirits. Martin studied with Dean Jackson from Redland’s Distillery, a course designed by the father of Tasmanian whisky, Bill Lark. As a third-generation pharmacist, Martin has studied microbiology, biochemistry, chemistry and mathematics – a handy skill set for a distiller. 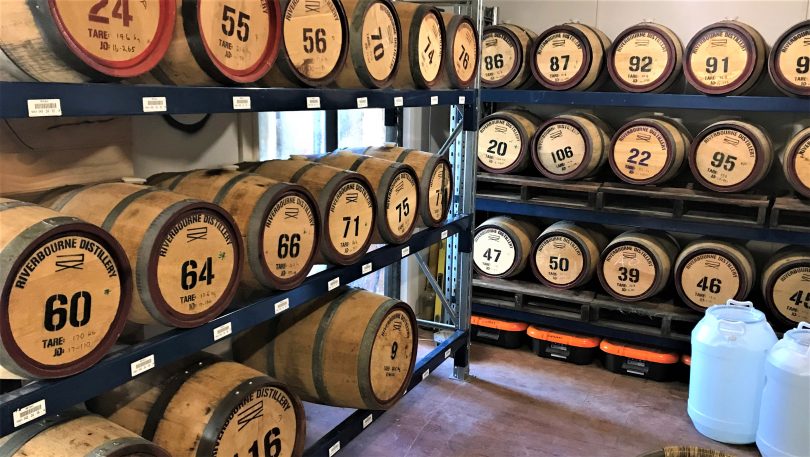 The whisky has to be in the barrel for at least two years.

The boutique distillery is a one man show, mashing, fermenting, distilling and ageing his range of boutique whiskies and rums with the utmost attention to detail.

A 900-litre copper still sits at the heart of the distillery. It is emblazoned with the company logo which, as a stylised version of a prescription ‘signature’, is a nod to the pharmacist’s journey. The Logo is a stylised R based on the Egyptian eye of Horus, which became the recipe sign for prescriptions. Pye says, “as a 3rd generation pharmacist, [it] seemed appropriate.” 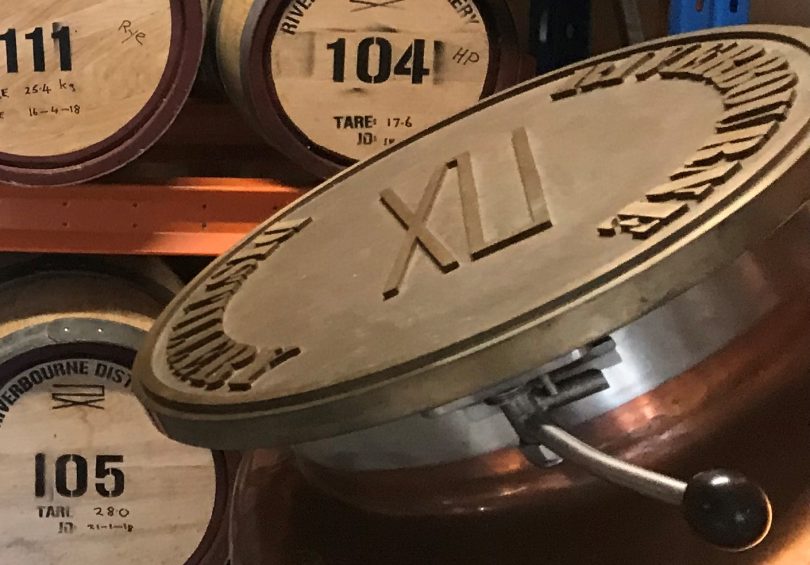 The Logo is a stylised R based on the Egyptian eye of Horus, which became the recipe sign for prescriptions.

The distillery currently has over 50 French and American oak barrels of rum and whisky ageing for the required minimum of two years. The next release will be ready for a festive dram by Christmas 2018.

In June, Martin attended the ‘Whisky Freedom’ conference in Perth with his ‘Riverbourne Identity’ and ‘Riverbourne Supremacy’ Whiskies, meeting fellow distillers and enthusiasts, and sampling whiskies from Scotland, Ireland, India, Japan, America, France, Italy and Australia along with some craft rums and gins. The feedback has been good.

The Distillery also produces premium vodka and rum. The first of the rum, lovingly matured in an ex port cask, was bottled just a few weeks ago. “Riverbourne Rum” is a dark rich sipping rum at 48% ABV and $100 for 700 ml.

With the current craze for premium local spirits such as gins, The Riverbourne Distillery offers a unique taste of the Capital Region. Martin is enthusiastic at his new ‘career’ and is looking forward to releasing more product to the local market as it matures. 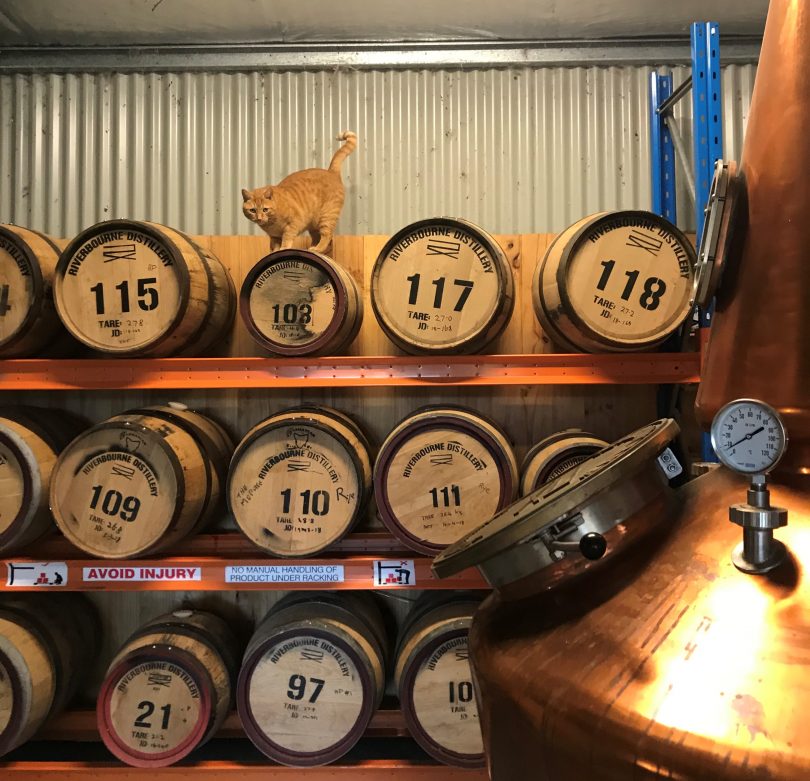 The Distillery Cat Ginge keeps a close watch on the barrels.

Martin says, “My passion for the craft has kept me highly motivated for the last few years, but now the reality of no income has become a focus. For two years everything has to be paid ahead in the hope that the resulting income will eventuate.”
There has been a long gap since early days when Bill Lark was the first to open a distillery in the Canberra region in 1992.

You are not likely to pick up a bottle from the Riverbourne Distillery at your local bottle shop. Currently sales are conducted online only at $175 a bottle. “We are intending to market online and also attend local markets. We are also interested in selling to local bars” says Martin. 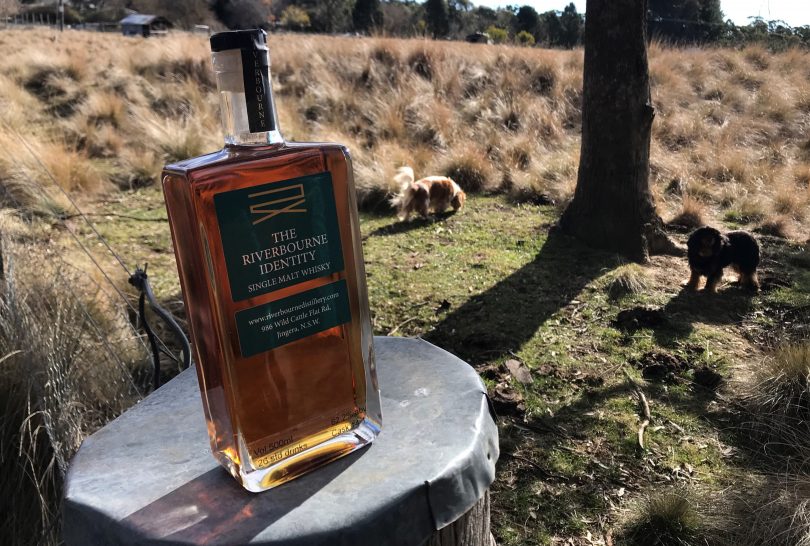 What is a single malt whisky?

A single malt whisky is one in which the whisky comes from a single distillery (The “Single”). The grain from which the whisky is made is 100% Malted Barley. (The “Malt”). Blended whisky, usually referred to as “Scotch”, uses a variety of different grains in addition to malt, such as wheat, and corn, (Irish whiskey often contains oats, – note the “e” in whiskey). The whisky is cured for a minimum of three years in oak casks. Then the companies (such as Johnnie Walker) buy the malts from various distilleries and blend them to create their spirit, achieving a consistency.

Robyn Hodgkin - 29 seconds ago
Oh Michael, Michael, Michael. I am not even going to address that argument. Just to say the trams wouldn't be wireless in tha... View
Ashley Wright - 14 minutes ago
Mark Flynn George Street in Sydney uses a very expensive Alstom propriety system. View
Ben Van de Bron - 53 minutes ago
Matt Gregory that should not exempt them from contributing to an infrastructure project. View
News 1

Grail - 23 minutes ago
Is there anything preventing the ACT establishing their own police force? View
News 4

Bill Pappas - 37 minutes ago
Robyn Holder always look to the govt to bail them out.... really.... this was no problem several years ago when unis were set... View
Robyn Holder - 16 hours ago
Bill Pappas if they were funded properly by govt they wouldn't have to rely on fees to run the uni. View
News 89

Jeff Duckett - 1 hour ago
F’ing dam straight. They land here because it’s cheaper than Sydney and then charge customers like a wounded bull. View
Trent Cotter - 4 hours ago
Scottie from Admin will make sure there is a direct flight to Hawaii. View
Bonnie Ross - 5 hours ago
Michael Wilson but still no direct flight to Hobart! View
Lifestyle 7

Natalie Grey - 5 hours ago
Jill Lyall "what's wrong with socialism?" Try asking the citizens of Venezuela! View
Jill Lyall - 8 hours ago
Henry Kivimaki what’s wrong with socialism? It’s a better use of our taxes than building war machines and subsidising min... View
Marie Ryan - 14 hours ago
Bob Cheney Why would we want to get rid of the current govt when they've achieved a city that runs on renewable power and has... View
News 27

Gerry Satrapa - 6 hours ago
Peter Robinson “starting to pop up around the place”... like; where, exactly? View
Andrew Nelson - 16 hours ago
I see Julia bullship is working her magic View
News 30

Jose Vega - 19 hours ago
Waste of money the federal government has already written the conclusions and recommendations and is now spending my tax paye... View
show more show less
*Results are based on activity within last 7 days

Stop the presses! Canberra now has its own sparkly colour-changing Unicorn Vodka …

Living the high life at Highgate Kitchen and Bar

@The_RiotACT @The_RiotACT
A long-term plan to develop skills and training and more infrastructure spending in business districts outside of the CBD and town centres top the list of concerns revealed in a Canberra Business Chamber survey of their members https://t.co/7Lf2PkvAUJ (2 hours ago)