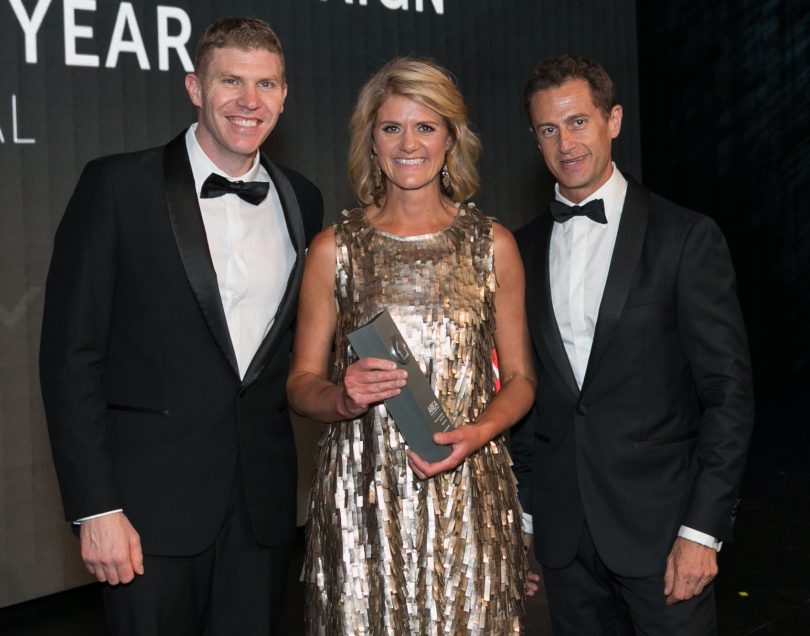 Holly Komorowski with her REA award in Sydney. Photo: Supplied.

Former schoolteacher Holly Komorowski always felt right at home in real estate, so much so that she left the security of the classroom for the competitive world of property and ended up creating her own brand.

It’s proved a winning one too, with the woman behind home.byholly taking out her second Annual REA Excellence Awards (AREA) in a row for Property Campaign of the Year, and changing the way homes are sold in Canberra.

Presented in Sydney earlier this month, the AREAs honour the most innovative, community-minded and highest-achieving individuals and businesses across the property and media industries.

Holly’s win last year was a first for a Canberra agency and to back it up again this year is “very exciting for us, given it is on a national platform”.

An innovative, personal approach to selling property based on creating compelling stories about the properties she is selling is a key point of difference that is the hallmark of home.byholly, and a strategy being emulated in the marketplace.

A keen adopter of digital tools, Holly’s use of social media and video has also contributed to the firm’s success.

“We’re always looking for as many creative and high-tech strategies as we can use to create exposure for properties,” she said.

During the winning campaign, Holly ran concurrent narratives about the property, one a personal story about the owner and the home, and the other an architectural story, along with a lot of videos.

By placing actual people in the photographic setting, Holly is also selling lifestyle as much as property.

The stories give potential buyers an opportunity to make an emotional connection to a property, as well as making it stand out from the others in the market.

“I am also very aware that we’re in a very saturated space, where there is so much information, so many properties, finding a way to differentiate in that market is what we’re always thinking about,” she said.

“If you’re willing to do things differently, put people in photos and help convey the way you might live in a space or convey the lifestyle around the property, it’s about that as much as it is the home quite often.”

Holly looks to tailor campaigns to the clients. “Instead of a cookie cutter approach or one size fits all, we’re always willing to find other ways to look after our clients and deliver campaigns around their property and their needs,” she said.

The greatest compliment was when people recognised immediately from the photos that it’s a home.byholly property. And imitation is the greatest form of flattery with other firms looking to embrace similar ideas.

Spending a year trying to find an Inner North home to buy was virtually her real estate apprenticeship, says Holly, who found she always wanted to talk about real estate and what a property was worth.

She finally found the house and eventually a new career. “It was suggested to me that I might be good at it,” she said.

So she reached out to contacts she had made, did work experience, got some training, and found herself in the Dickson office of Luton Properties.

After five successful years, she felt confident enough to step out on her own.

“I had started to do things differently, wanted to take photos in a different way, and had already started to grow my own brand within the company,” she said.

Developing her own following encouraged her and gave her the confidence to start her own company.

That was two years ago, and the firm now employs about 10 people and has two ‘very significant’ awards under its belt.

Her advice to others contemplating a move into the industry is nothing flashy – be persistent, work hard, and love what you do, “because real estate can take some time to establish yourself and you have to be committed to be successful.

Although the speed at which the Holly brand took hold was surprising. “We attribute that to the way we use social media, the way we were able to use those sharing channels to get that story out there, and the way we did communicate using video in a much more personal way,” she said.

Robbie Munday - 16 minutes ago
How are there noise complaints? They literally built it the middle of nowhere. View
Chris May - 5 hours ago
I grew up in Port Pirie in SA Their moto cross track was out of town, about 3kms, in a old quarry. Some bright spark opened a... View
Viviean Laycock - 8 hours ago
I don't think I understand. The track was running vintage cars, which no one seemed to have a problem with, so why is it unwo... View
News 6

Kalo Arepo - 30 minutes ago
Food should never be thrown away -except in very very rare circumstances ! View
Motoring 50

Clare Hyden - 2 hours ago
Mark Rogers ummm 20,000 through the gate each day. View
James Kelly - 8 hours ago
Health minister impressed… bro I got covid there View
Mark Rogers - 9 hours ago
The event organisers clearly stated it was not limited to 20,000 a day. It was 80,000 overall. So some percentage of that was... View
Opinion 375

chewy14 - 7 hours ago
Astro, And I'm commenting on the people who are using the red herring of spending on roads to justify wasteful spending on un... View
chewy14 - 7 hours ago
"Public transport is a perfect example. Except for a few locations in the world of public transport of any type including bus... View
Clinton Berry - 8 hours ago
Nada Krstin so you’re saying you know how to stop rain? View
Breaking 6

local1 - 8 hours ago
The BOM weather app gives me a tsunami warning in Narrabundah... View
News 54

Privacy and space awaits in this 1960s charmer in O’Connor

Potential and intrigue stirred by house with ‘good bones’