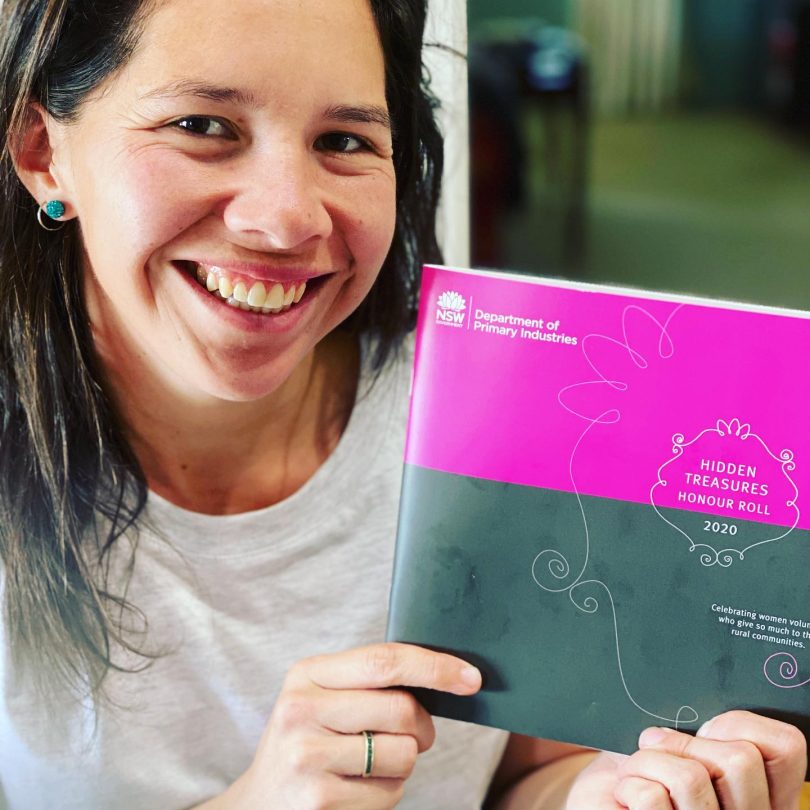 Carolina Merriman from Good Hope, near Yass, is one of 13 local women recognised in the 2020 Hidden Treasures Honour Roll. Photo: Supplied.

Yuin woman Narelle McLeod has been heavily involved with Indigenous soccer at a local, national and international level for more than 20 years. She helped create Australia’s only Indigenous soccer club and the first National Indigenous Football Championships in Nowra.

Narelle is one of 13 women in southeast NSW recognised on the 2020 Hidden Treasures Honour Roll – a joint project of the Rural Women’s Network and the NSW Centre for Volunteering – for the significant contributions they have made to their communities through volunteering.

The honour roll acknowledges that the past year has placed enormous pressure on rural and regional women, families and communities, and that despite the tough times we find ourselves in, it is volunteers who have stepped up to support their communities.

Danielle Murphy, from Cobargo, is another woman recognised on the honour roll for the tireless hours she has given during the bushfire crisis and recovery. In the past six months, she has spent 2268 hours volunteering at Cobargo Bushfire Relief Centre while taking care of her four children, including her youngest who has autism and epilepsy.

In January, Danielle responded to the bushfire crisis after fighting fires in her own village. Just three-and-a-half weeks later, while volunteering at Cobargo Bushfire Relief Centre, she saw a black smoke cloud near her property and fought the firefront for 36 hours without sleep.

“This year, we have called on our volunteers to go above and beyond in recovery roles across the state,” said NSW Minister for Agriculture Adam Marshall. “Our small gesture of appreciation through their inclusion in this honour roll is a tribute to these rural and regional women as we continue to focus on building resilience and a rewarding future for the next generation.”

Beverley Davis, from Bodalla, is also recognised for the many hours she spent visiting bushfire affected families to offer support in the aftermath of the Black Summer bushfires. She is a tireless volunteer for several organisations, including the Bodalla Volunteer Fire Brigade, Presbyterian Church and Bodalla Country Women’s Association.

Additionally, Beverley has worked for Eurobodalla Shire Council’s Children’s Services for many years. Council’s staff say she goes well beyond being a paid employee.

Over at the Young and District Community Hub, Jennifer Duddle, or Gaga as she is known, has been presenting a music and dance class for preschool children for more than six years. Jennifer’s inclusion on the Hidden Treasures Honour Roll acknowledges that she always goes the extra mile for children whose artistic input can be somewhat stunted by their distance from a main city.

READ ALSO Living with people makes parenting easier – so why don’t more of us do it?

Carolina Merriman, from Good Hope, near Yass, has been acknowledged for her active role in her local farming community during the past few years. She took on roles with the local NSW Farmers branch during the peak of the drought, all while looking after her young daughter. Carolina has also made a big effort to get the community behind her various initiatives relating to the drought, mental health and skills training on weed management.

“Despite the tough times we find ourselves in, it is important for us to take the time to thank and recognise the volunteers who have stepped in to support their communities,” said Mr Marshall.

“We encourage you to join these celebrations by reading these stories, and perhaps taking inspiration to start, or continue, your own volunteering journey.”

The 2020 Hidden Treasures in southeast NSW are: