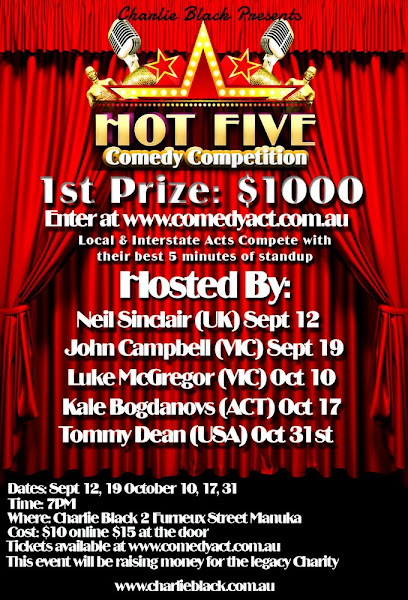 This in from Charlie Black:

The Hot Five is back! Come and watch some of Canberras up and coming stand up comics battle it out with their best five minutes for a chance to win $1000 Cash! This event will be running over five weeks with a lineup of all star hosts. Logon to http://comedyact.com.au/ to enter or to purchase a ticket. Tickets are $10 online and $15 at the door. All of the profits from ticket sales will be donated to the legacy charity.

Kicking off on September 12th the first event will be hosted by Neil Sinclair (UK) Neil is a regular on the comedy circuit, performing alongside comedians such as Ross Noble, Josie Long, Jim Jefferies and Adam Hills.

You can catch Neil at a range of venues including The Local Laughs (Aus), The Comics Lounge (Aus), Komedia (UK), Up The Creek (UK), television [“The Librarians” and “A Bed of Roses”-ABC TV] and radio.

The 2008 winner of the Raw Comedy competition is an exuberant joke-writer with a penchant for wicked one-liners. In 2009 he hosted the Comedy Zone , a showcase for burgeoning comic talent in Australia. In 2012 he was nominated for the mysterious, yet prestigious Jonsey award for his Melbourne International Comedy Festival show ‘Panic!’.

Critics say that the compelling ingredient of a Neil Sinclair show is Neil himself. Charm personified. Full of poise, laid-back enthusiasm and a big splash of charisma. Neil takes a risk or three and examines familiar situations with an original twist.

I am going to attend this, however I bet Jorian Gardnier is running to a phone box to call his lawyer “spit snort this is my idea bunch of fives spit snort.” and so on.

Colin Vivian - 2 hours ago
Neenie Baines it still feels like we’re losing multiple times more trees than are bring planted 😢 View
Jesse Mahoney - 2 hours ago
Valerie Foster I agree open spaces are in the design, so if you don't build up you fill those in... Think about it for a seco... View
Neenie Baines - 4 hours ago
Colin Vivian well that’s really sad. But at least the ACT government is proactive in planting trees. View
Property 4

Capital Retro - 3 hours ago
Are wood chips "non-carbon"? They use them instead of coal in the UK and call them renewables. We have all that bushfire fuel... View
tfx1 - 8 hours ago
The only workable reliable noncarbon electricity supply. View
News 146

TimboinOz - 6 hours ago
Good food and good local wine has been around for way longer than Andrew Barr knows. Wotta Surprise. Perahps its because most... View
Opinion 30

Craig Evans - 7 hours ago
No we have a Chief Minister..as does NT View
Sol - 8 hours ago
Zed has lost his grip on the party. He is literally a human parasite, drained the Canberra Liberals dry, consigned them to op... View
Courts & Crime 2

Brianna - 8 hours ago
Yep, disqualified for 19 years. I'm sure he won't driven agai.... View
tfx1 - 8 hours ago
How was he allowed to be released so many times after committing violent crimes before he was eventually held in custody? View
What's On 2

Pia Bedford - 8 hours ago
The Bohemium symphony in Saturday has been rescheduled. View
News 27

Capital Retro - 9 hours ago
Can't see what the problem is - there was no official information disseminated to anyone outside the agency and is is crazy t... View
show more show less
*Results are based on activity within last 7 days

@The_RiotACT @The_RiotACT
The historic Forrest Fire Station ceased operation in 1983, and these days its museum is dedicated to preserving firefighting heritage, and is home to memorabilia and possibly a ghost https://t.co/Asmwd8sKcl (4 hours ago)

@The_RiotACT @The_RiotACT
Pretty Persian Minou and delightful dog Mazda are looking for their forever homes - you won't regret checking out our @rspcaact #PetsoftheWeek https://t.co/5wifaXQgrL (5 hours ago)

@The_RiotACT @The_RiotACT
This opulent #Kambah home could be straight from the popular TV series Dynasty - and it's tipped to break auction sales records https://t.co/S50MAHTW5C (6 hours ago)