How about a hotel among the gum trees? 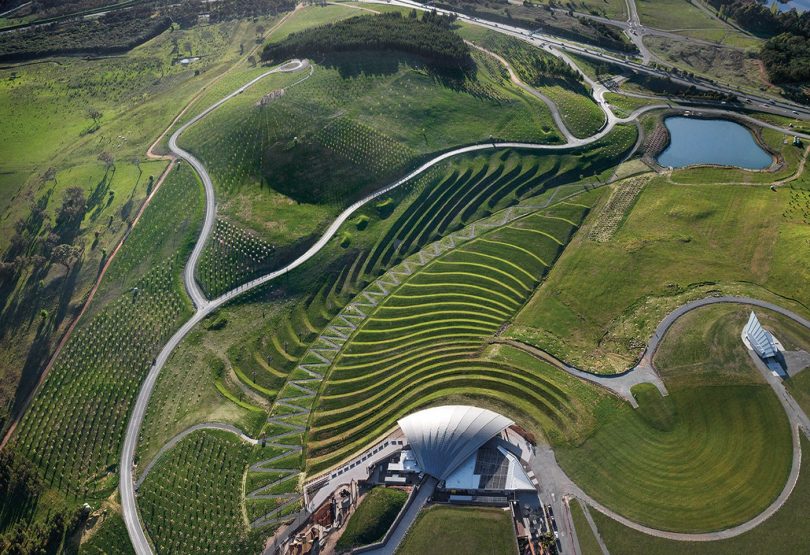 The zig-zag gardens will line a path from the gates of the National Arboretum to the Village Centre. Photo: Supplied.

A new hotel, cabins among the trees and 50 newly planted zig-zag gardens in the central valley of the National Arboretum are all coming closer as the site grows faster than a rogue willow tree. And that means that what began as a patchwork of forests is rapidly changing shape as it expands commercially.

The hotel idea isn’t a new one: it formed part of the Arboretum’s infrastructure master plan. A range of five to ten years was initially indicated as a timeline, and the expression of interest process was slated to begin when economic conditions were “suitable”. It seems that time may be now.

The ACT government expects that an Expression of Interest for the hotel will be released next year, investigating potential development partnerships. It’s quite possible those investors may come from overseas: a spokesman for the Chief Minister said that an Arboretum hotel has been identified as a future opportunity during recent trade missions.

Mr Barr said recently that the acquisition of Hotel Hotel at New Acton by the Hong Kong-based Ovolo Group indicated the effectiveness of the international trade mission process and the interest in Canberra from internationally based investors.

Friends of the Arboretum president Trish Keller is enthusiastic about the potential and thinks “the sooner the better” for the project. “At the moment we have this wonderful site, with lots of events, weddings and the like, but there’s nowhere to stay if people afterwards want to relocate. Cabins in the forest would also be well received, I think, similar to the accommodation at the zoo. It’s a great opportunity and an ideal location.”

She says interest in the Arboretum as a tourist destination and venue as well as an attraction for locals continues to be very high. “The visitors are just continuing to come. People say to me, I’m staying in town where should I go for a really special lunch, somewhere memorable? And of course, for me, the answer is always the Arboretum.”

The next major development includes 24 gardens in the Central Valley, placed along the zigzag path stretching from the entry gates to the Village Centre. Each garden bed will be planted with a particular species and Arboretum director Scott Saddler says interest has already been surprisingly strong. “We have the prospectus out but we haven’t even got the project off the ground yet and already we have commitments for five gardens.”

The gardens will be matched by the avenue of trees already being planted by dignitaries, various world leaders and celebrities in an ongoing programme. Eventually, there are plans to incorporate a water feature cascading down the spine of the path, creating a more pedestrian-friendly environment for casual strolls.

On Tuesday night (13 November) the Friends of the Arboretum will launch their first fundraising campaign. They’re seeking $50,000 after committing to sponsoring one of the zigzag gardens and Trish Keller says they’ll launch a few balloons, pop some champagne corks and celebrate the next stage of growth.

Do you think there should be a hotel at the Arboretum?

Damien O'Connor cabin in the arboretum 😍😍

Coffee that is actually drinkable at the cafe.

Shade over the pod playground!!!! Also maybe some water play options- the play area is very exposed in summer- and as one of only three enclosed playgrounds in Canberra it would be amazing if hot weather was factored in to the parks design.

I'd love to see more sculptures dotted through the landscape too.

Where is the Arboretum master plan available? Earlier Riotact topics on accommodation in the Arboretum didn’t mention a hotel that I recall!

What would I like to see? A lack of commercialism.

Why do we need cabins and hotel to settle on the land that all Canberran rates payer have paid for. It should be kept as a great big park and not in the hands of a few privilege one

Firstly you would need some gum trees. I don’t know the exact numbers but it appears that there are only two or three eucalyptus varieties. The rest, 100(s) ? Are all foreigners.

Of course a hotel amongst the trees is a great idea. Cabins too and campsites. Perhaps not caravans though. The more the area is used and enjoyed the better. All these uses can be easily accommodated if sensitively planned and well managed. Too many nay sayers in this town and too few people with vision.

In my days as a child we ate what was put in front of us. What are you talking about?

A jetty down at the lake so the ferry can take tourists to the Arboretum carried by a vehicular to take them to the top. There should be two ferries continually circling the lake with daily ‘hop on-hop off’ tix for tourists to visit all the venues accessible from the lake from the Arboretum to Kingston Foreshores

Restore more of the original native woodland. The arboretum is weird, a pointless zoo for trees. Great views tho.

I absolutely agree with many here - more picnic areas, free parking for all and the main building to open much later on summer evenings especially.

I'd rather they kept hotels off-site.

Picnic tables and some shade.

Though I still don’t understand its existence at all.

Why everything else us forsale wether we want it or not. ...lets see which one of the longlunch club gets this,

I think I have figured out why a lot of commentators want to see the arboretum fun park to just keep on growing and growing with every conceivable gimmick and facility available whatever the price.

These people, like a lot of ACT politicians, think money grows on trees and as there are a lot of trees at the arboretum so that’s where all the money come from.

If only it were true.

Please don't change it. Too many positive comments from bdm's. There are already plenty of places around the lake to do tai chi and yoga. Even with gym equipment. Please let's have a place with out those things. Don't let this beautiful place be invaded

Invaded by quiet groups of people enjoying themselves? Sounds dreadful.

A space that can be rented for Yoga classes!!

Paul Conn - 29 minutes ago
Glenys is a great manager and one of the nicest senior colleagues I ever had the fairly brief pleasure to work with. View
Deborah Gale - 56 minutes ago
A great boss and a nice lady. View
Karen Baldwin - 5 hours ago
Tania Parkes yep, me too View
Lifestyle 22

Sean McGrath - 1 hour ago
They are a gimmick and will 66 soon vanish like a Footsal pad. View
Arleen Stark - 5 hours ago
Considering the lonely scooter I see every day abandoned all over the city, I reckon it would take days, not hours, to find t... View
Teagan Erin - 15 hours ago
Shelby inside anu residences 😂😂 View
Opinion 96

Guy Noble - 1 day ago
37 bux an hr to sit in a truck and drive for a few hrs,,, where do i sign up View
show more show less
*Results are based on activity within last 7 days

@The_RiotACT @The_RiotACT
Canberra's rock band Hands Like Houses is breaking free of their four walls for a national tour. We caught up with them on the road this week https://t.co/ojiymijMfp (27 minutes ago)