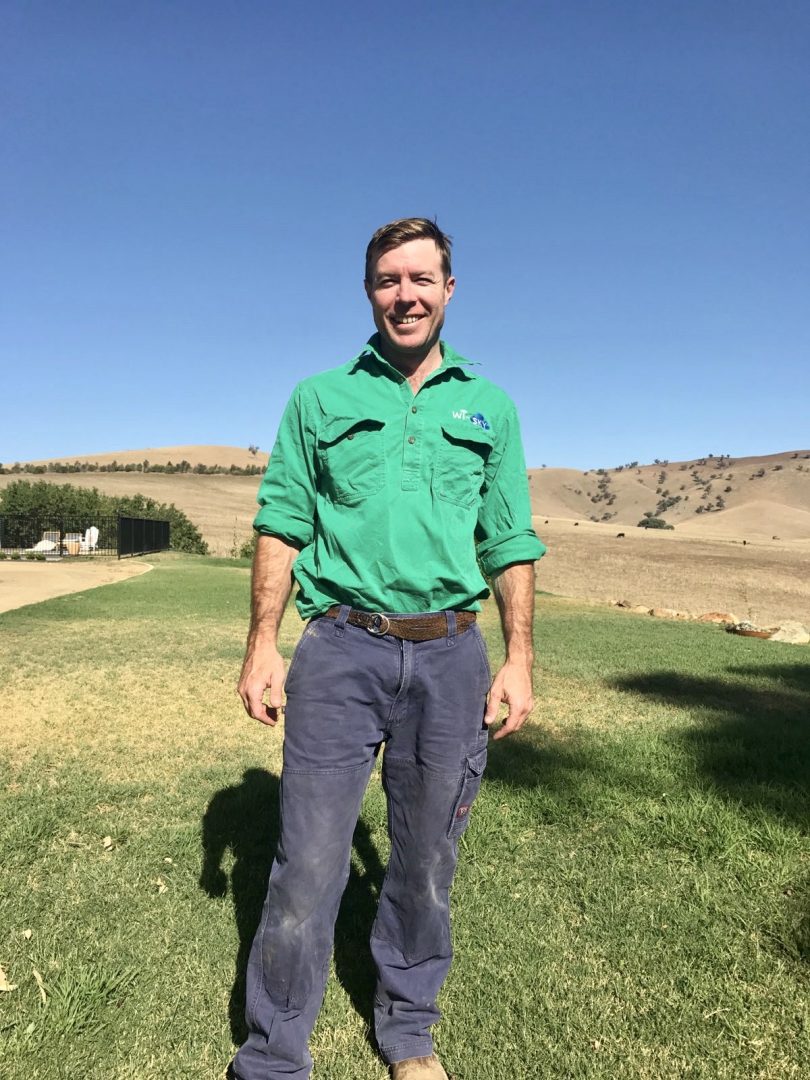 The ingenuity of Coolac farmer Jock Graham has improved the lives of thousands of people living in rural parts of the Riverina and South West Slopes. Photo: Supplied.

Atop hill or down valleys, for many farmers and residents living in south-west NSW, there was always looming exasperation when it came to mobile phone and internet coverage.

And that felt a bit like the cart, led by a blinkered horse, lumbering clumsily along a rough track while just over the horizon was a magnificent highway to the world.

The rough track is gone because someone did something about it.

That someone was Jock Graham who, armed with an agricultural economics degree and banking industry experience, literally turned off the Hume Highway when he returned to his family’s mixed-farm at Coolac in 2008.

He said his corporate-honed perspective allowed him to look at the farm operations with a different set of eyes.

And his view was that technology-led information integration was key to improving business efficiencies.

The diverse Graham family enterprise transferred onto an Excel spreadsheet, which became a concept for a mobile farming app, perfect for an emerging smartphone market.

“It was basically getting the farming notebook shared across the farm with everyone,” he said.

This is where the challenge of poor internet presented. Farmers faced difficulty uploading software files with sketchy home internet.

“It was a bit like the cart before the horse, developing the app before farmers could use the internet,” he said.

In 2015, a Nuffield Australia Farming Scholarship, which awards primary producers the opportunity to travel overseas and study an agricultural topic of choice, took the app to the next level.

“My findings were that small businesses in rural and regional communities are well placed to build their own communications infrastructure that can cover 100 per cent of rural areas with city-grade internet services,” he explained.

The result has been profoundly life-changing for thousands of regional people.

Its genesis was in Jock’s farm office and a Gundagai fire shed.

“We needed a solution for the farm office so we did a deal with the fire shed to get an ADSL service delivered there, we used the building to relay to a solar communication pole and bounced that to the office,” Jock said.

“That was our first foray into fixed wireless technology – essentially just to get our office connected to a more consistent internet service where we wouldn’t have data limitations and a set speed,” he explained.

Then the neighbours wanted in.

So Jock started connecting people with multiple ADSL lines until they outgrew that and Jock moved to get their first fibre hand-off connection which allowed them to utilise high-speed data.

“We purchased a wholesale internet product and began retailing it to different farms and villages around Gundagai – that was essentially what we started with,” he said.

Today Gundagai sits at the centre of a network – called Wi-Sky – that Jock says has grown from hill to hill, solar pole to solar pole in villages and on farms roughly north to Temora, east to Bigga and Crookwell, down to Talbingo, Humula and the edges of Wagga Wagga.

What cannot be underestimated are the economic, social, educational and entertainment benefits this has delivered to those people who despaired of ever being connected at all.

“First, you have a lifestyle change of many people who had limited to no connectivity who weren’t able to use the most basic packages or services,” Jock said.

“It’s given them, for one, access to cloud-based business tools from accounting, office management and meetings that are necessary for every business”.

“And now the door has opened to online streaming services which were completely disregarded for anyone in the bush because of the data restrictions,” he added.

“It really emphasises the importance of the internet as an essential service, and for the government to ask people to work from home, students to study from home, they couldn’t do this without it,” he said.

The business-as-usual model of rolling upgrades has Wi-Sky well placed to flex with the current surge in demand.

“A 360-degree front means we can add sections to it where the interest increases and work inside the boundary to further cover particular areas that don’t have a great signal due to obstacles that are in our way for existing infrastructure,” he explained.

And where to next?

“We’ve always just been of the opinion that we’ll grow where the demand is,” Jock said, “and where the calls come in to put a service.”

Stuart Green - 53 minutes ago
Scott Bell Thats obvious, they'll light us up for more on the other 4 days... View
Community 14

astro2 - 1 hour ago
If you would prefer to take your own private motor vehicle to the shops then you may continue to choose to do so. However the... View
Deborah Gale - 3 hours ago
Flannie! View
Douglas Ryan - 5 hours ago
Bruce Rossel flanno everyday to become a thing View
News 2

Peter Curtis - 12 hours ago
How is that the Libs can take the incumbents on from the left? They raise real issues. View
Motoring 30

@The_RiotACT @The_RiotACT
They rescued their cattle from the #Braidwood bushfires only to lose their home and herd in the floods - but Peter and Tracia are soldiering on https://t.co/4porXDUR3I (46 minutes ago)