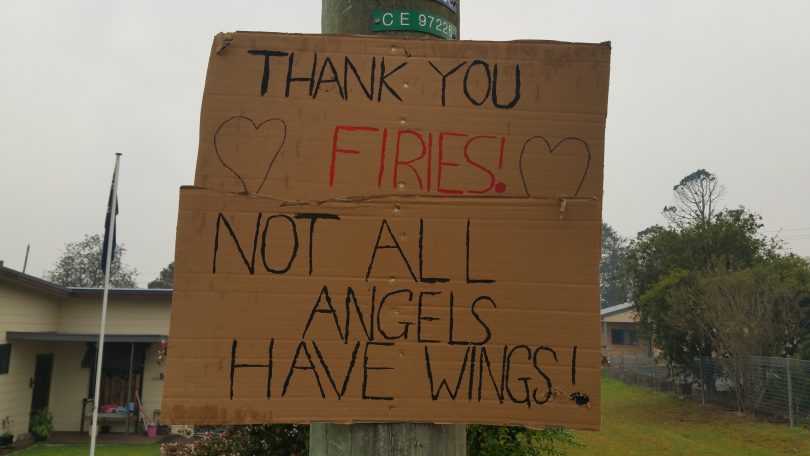 Since the New Year’s Eve bushfire fronts passed through Malua Bay and surrounding areas, residents from Batemans Bay through to Broulee have largely been without power, hot water, internet and mobile coverage.

Street groups have been sharing resources such as gas stoves, generators, food and ice, and trying to keep each other informed as they drive to higher places to find a signal.

While there have been reports on Facebook of opportunistic looters taking Christmas toys and generators, and breaking into homes from which people have been evacuated, the spirit of generosity has mostly prevailed.

Neighbours with deep freezers have offered to feed whole streets with meat still frozen despite power outages. People have gathered together on their streets to share comfort, news and stories, helping each other to face this ‘new normal’ where every hot and windy day brings fears of a possible firestorm.

Local businesses, already fire-affected, chipped in to buy water bottles, party ice and other supplies. Malua Bay IGA was open from New Year’s Day to help locals get milk, ice and other essentials, using their generator to keep fridges running.

The Malua Bay Chemist has been open every day to allow those who needed prescriptions to get the medicines they need to stay well. Raj Gupta has dispensed and delivered, particularly to those who lost their scripts to fire.

Bells Super Family Carnival shared their food and generators with locals doing it tough in the aftermath of the fires. They have opened the carnival again so children and families can have some fun and forget their ordeal for a while. 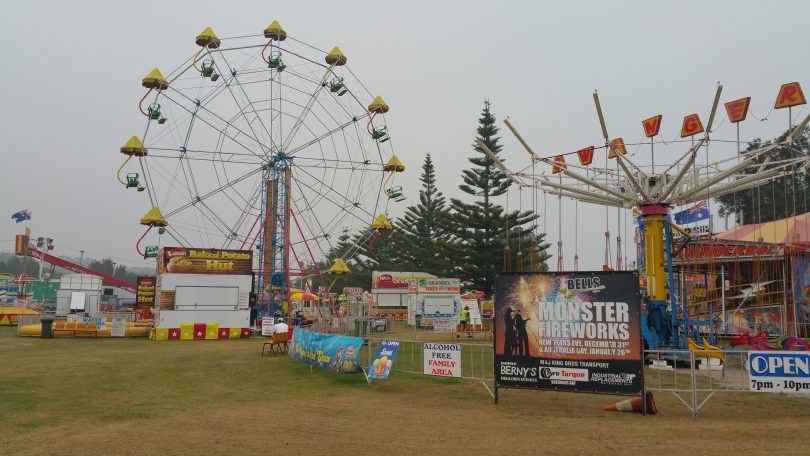 A truck towing a shiny new trailer unit arrived in Malua Bay a few days ago and unpacked near the Surf Club, offering free hot showers in three private cubicles complete with clean towels, six washing machines, six clothes driers, a kitchen, instant hot water for tea and coffee, and Internet service. It came from Fresh Start Missions, a registered charity run by the husband and wife team of Susan and Hamilton Gervaise from Wollongong.

The Fresh Start Trailer usually serves the homeless on the streets of Wollongong, to where it will soon return.

Still without Internet, TV and landlines 10 days after the New Year’s Eve fires, we are feeling cut off from the world, and unable to really start to process what happened and the miracle of our own safety.

Every day we have driven to various and changing high points for mobile signal, or to the Evacuation Centres where NBN trucks have provided some limited Internet service, for which we are thankful. Many have relied on Facebook and mobile messaging to get news of their loved ones and let family and friends know they are safe

When our Malua Bay Fire Captain Ian Barnes posted on Facebook we were so relieved to hear his words of comfort and strength, and so proud of all of our firefighters, both paid and volunteer, for their brave efforts to protect us all against impossible odds.

I spoke to a Nigerian refugee who had come to Australia for asylum from political unrest and instability in his country who was volunteering with the Salvos at the Hanging Rock Evacuation Centre in Batemans Bay.

His experience of an ammunitions factory blowing up his home town in Nigeria meant he understood what it felt like to be a refugee in his own country, with a mass exodus of evacuating and frightened people.

Those who have lost all, or who are waiting to hear, are relieved to be able to care for and cuddle their pets. Animals at evacuation centres have been calm and well behaved, a source of comfort and normality.

The police and others stationed at the Hanging Rock Evacuation Centre played cricket with some of the children there, a heart-warming sight to see. The army arrived only a day or two ago and sat relaxing there, too.

The need for company, to share our stories, in order to piece together the bigger picture of what occurred, and is continuing to happen in other places, has meant we are all trying to check on each other and help out where we can.

As residents who evacuated return to face the devastation, we will need our sense of community to support each other through the recovery process.

Jesse Rowan and her family chose to stay and defend their home and street (luckily still all safe) in Malua Bay on New Year’s Eve, and have remained at their home since then.

Original Article published by Jesse Rowan on About Regional.

Nick Gligoric just for you