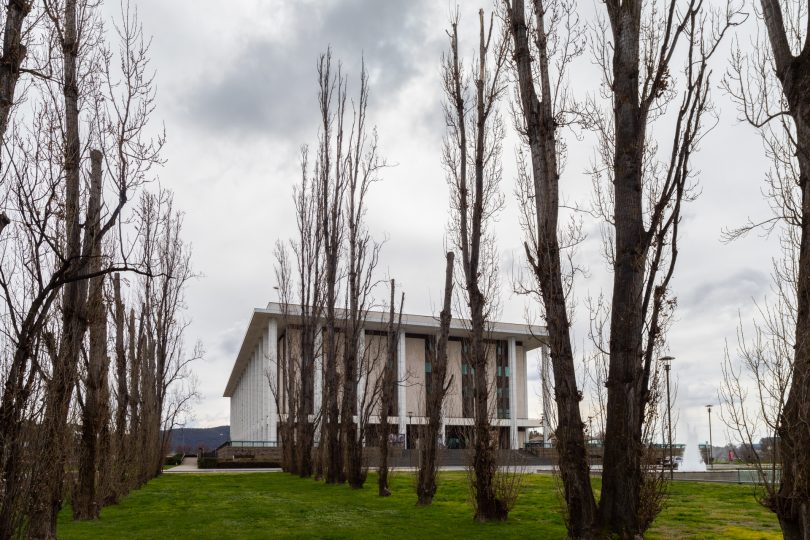 The poplar trees at the National Library of Australia. Photo: Michelle Kroll.

A prominent ACT heritage group has questioned whether the National Library’s landmark poplars need to be replaced by another species amid concerns that the change will damage the heritage fabric of the Parliamentary Zone.

The Lake Burley Griffin Heritage Guardians say the National Capital Authority has got it wrong in its proposal to replace 38 ailing Lombardy poplars (Populus nigra ‘Italica’) in the NLA’s forecourt with an oak variety.

The NCA says it cannot stay with the poplar because the ACT has declared it a pest and has opted for English Oak trees (Quercus robur ‘Fastigiata’) due to their similarity in shape, size and leaf colour.

It says the oak species will replicate the poplars’ heritage character and are proven to grow well in the Canberra climate.

But in a submission to the NCA, the Guardians say the oaks will be about half the height of the poplars, have a fatter shape and will be slow to lose their autumn leaves, giving a drab winter appearance. 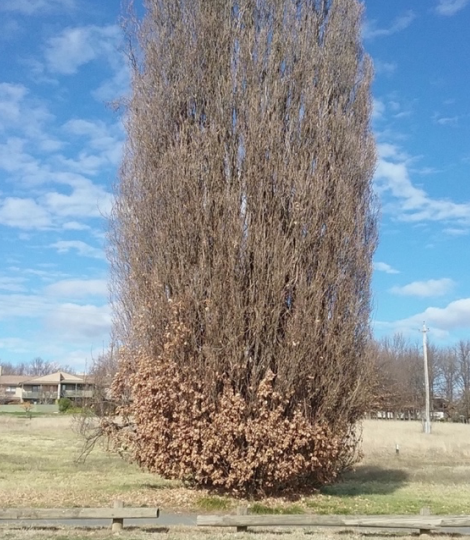 A mature English Oak (Quercus robur ‘Fastigiata’) on Alexandrina Drive: half as high as the poplar and retains dead leaves. Photo: LBGG.

The Guardians say there is enough flexibility in the ACT legislation to allow for exemptions, as well as there being grafted varieties that would reduce concerns about the unwanted spread of the species.

They accuse the NCA of misrepresenting the ACT’s Pest Plants and Animal Act 2005 in its assertion that any arborist planting the poplar species would lose their practice licence.

The Act “clearly states: that a person may apply, in writing, to the director-general regarding using a prohibited plant”, the Guardians say.

The Guardians say the NCA has ignored this option, and a permit would allow the NCA, or its chosen arborist, to import, not just replant, these trees in a suitably safe manner.

“LBGG are also concerned that the NCA proposal will set a precedent for replacing poplars throughout the Parliamentary Zone where Lombardy Poplars are selectively located as eye-catching key features for their sentinel role, impressive scale, slender shape, yellow autumn leaves and the clear tracery of their winter branches,” the submission says.

“In the case of the NLA forecourt, they reference and emphasise the classical-style columns on the NLA façade and lead the eye to the NLA entrance.”

The submission urges the NCA to reconsider its decision in light of the wider implications for the Parliamentary Zone.

The Guardians also say poplars could be planted in large, buried pots, as used at Old Parliament House.

The NCA did not say if it had received any official advice from the ACT Government on the poplars, but a spokesperson said it respected the ACT’s preference to move away from using the Lombardy Poplar and was exploring alternatives that would address the original purpose of the plantings – a seasonal tree to complement the classical styling of the National Library.

The spokesperson said the NCA’s Tree Management Policy recognised that there may be a need on a case-by-case basis to transition to new species within the highly curated Canberra landscape as trees come to the end of their life and need to be replaced.

“By doing this we can address things like climate change and sustainability issues, particularly as our knowledge has increased about the impact on the environment of particular species chosen in earlier times,” the spokesperson said.

The NCA had considered several alternative tree species and their cultivars and relied on an expert report from a qualified arborist that considered different replacement species.

“The Quercus robur ‘Fastigiata’, commonly known as columnar English Oak, was identified as being the most practical for its tolerance in the Canberra climate,” the spokesperson said.

“This species is also recommended by the ACT Government as a suitable tree for its tall columnar shape and suitability for use in Canberra.”

Public feedback on this application closes at 5:00 pm on Friday, 17 September.

it really is time we started to think about planting local native plants-even tall shrubs will do. Poplars undoubtedly have there place in their own world, but this is a different world and we need to start adapting to that. In a sense Poplars represent an imperial tradition and we need to leave that behind.

Determination 8950 says the oaks [only] “must” be planted, averting a need for NLA “heritage” scrutiny by the Federal Minister.

Looks like a done deal. Rather than perpetuating British oak, why can’t NCA go for a slender local species, that would blend in?

There are Polplars in Telopea Park that need to be replaced. For a while the oak tree option was considered but it now appears that a non-suckering Poplar is OK with TCCS Tree Unit. Why not also in front of the NLA? 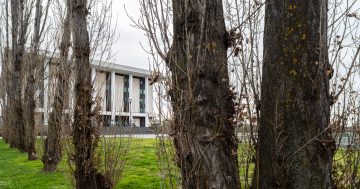 What will replace the National Library's poplars in its Forecourt facelift? 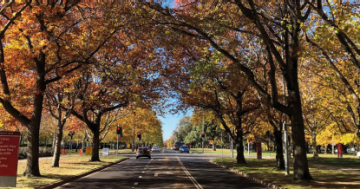