How to drench a wombat and cure the mange: ACT trial is a success 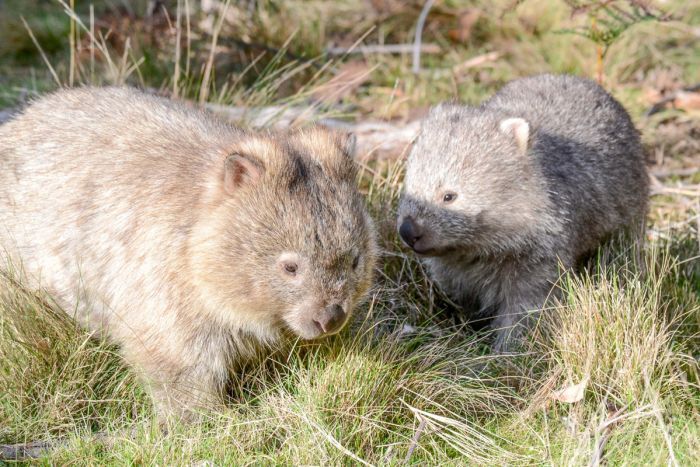 ACT Wildlife’s mange-treatment trial in Lanyon has been a success. Photo: Supplied.

Common agricultural chemicals, ACT election corflutes and old fashioned determination have combined to successfully combat deadly mange along the Murrumbidgee River at Lanyon, and now volunteers are looking to expand their work to another problem spot for the local wombat population.

The successful collaborative trial at Lanyon between ACT Wildlife and Parks and Conservation on treating mange means that a further project to manage an expanding problem on Cooleman Ridge is now likely to proceed if it gains funding and support.

“Cooleman Ridge is a very busy area where lots of people take their dogs for a walk, and we’ve been receiving reports for a while about the number of mangey wombats up there,” she said. “We’ve now identified where a lot of the burrows are, but there’s more work to be done on the size and distribution of the local population.”

Marg Peachey says that while the Lanyon trial happened in a relatively undisturbed area with little potential for impact on people and domestic animals, ACT Wildlife Rescue would need permission to carry out the treatment trial in the much more heavily populated area. It’s necessary, however, as mange now appears to be endemic in some local populations.

The treatment regime is simple: wombats respond readily to the right dose of Cydectin, a commonly available but relatively expensive agricultural drench. Getting the delivery mechanism right has been a matter of trial and error, but ACT Wildlife evolved an ingenious method involving, of all things, election corflutes.

The tough weather-resistant material is cut onto flaps that are installed on gates across burrow entries. The drench goes into a dispenser cup on the top of the gate that tips along the wombat’s backline as they go in and out.

The trial had a significant effect on the rates of mange in the Lanyon population, but Marg says that because wombats often re-use old infected burrows, the Lanyon trial has also taught researchers that treatment must be ongoing, rather than a process of complete eradication.

There’s a good roll-call of volunteers on hand to set up the gates but ACT Wildlife urgently needs either funds to purchase Cydectin or donations of the chemical, which is readily available at rural supplies stores.

What they don’t need, she says with a laugh, is more corflutes. “We’ve got enough of them to last forever after the last ACT elections. We even had someone roll up with the corflute advertising after sports grounds switched to electronic signs and we got the remainders.”

Sarcoptic mange is a skin infection in mammals that is caused by a burrowing parasitic mite. It affects more than 100 mammal species worldwide, including domestic animals, ringtail possums, brown bandicoots, koalas and common wombats.

Mange infection can result in aggressive scratching, hair loss, skin thickening and crusting, skin discolouration, open wounds (from scratching), weight loss and even death. The mite is thought to have arrived on the Australian continent with European settlement and wombats appear to be particularly susceptible to infestation.

“We’ve learned a lot from the Lanyon trial, but that was small biccies,” Marg Peachey says. “We’re ready to embark on something much bigger now.”

To make a donation or learn more about wombat mange in the ACT, visit ACT Wildlife .

Some people might be interested: There is a Viennese chamber concert upcoming on June 15 (2.30pm, family friendly) in support of Sleepy Burrows Wombat Sanctuary Gundaroo. Info & tix see www.trybooking.com/bcqlm

Coralee Flood Has Pete got the mange?

Does anyone know if you can purchase Cydectin in small amounts? We live on a property and there are wombats in need of treatment but from what I can see online a 2L bottle of Cydectin is around $350?

Elle Bryce Cydectin can be bought in smaller amounts at rural supply stores. It is much much more expensive in smaller amounts - e.g. 1L - almost twice the cost of larger quantities - 15 L. Depending on where you live, usually the local wildlife group gives it away to landholders / members of the public who want to help treat mange. LAOKO in the Snowy Mountains does not charge for Cydectin for locals / LAOKO members.

Question... is it spread from foxes or do wombats get mange anyway? But good on ya everyone involved 🤙👏🤗

Mange is just so cruel

Load up a super soaker .

Yes please! We love our wombats up the hill!

Jimbo Lambert - 36 minutes ago
Justo Justo some people have driven that stretch of road for 30 or 40 years at 60km/h. If they suddenly reduce the limit it i... View
Dean Soccol - 2 hours ago
Nathan Grieve in Queensland every time we get a fine we lose points. So if you are one of those that don’t care about the m... View
Nathan Grieve - 3 hours ago
Andrew Nelson not every offence comes with demerit points, so unfortunately that statement is incorrect View
Community 8

@the_riotact @The_RiotACT
Extension of support for #Canberra businesses - especially small #businesses - is welcome, but will it be enough to keep them from disappearing? Local experts have their doubts https://t.co/o4s1D2OGsv (36 minutes ago)