How to join the ANU’s Guinness World Records stargazing attempt 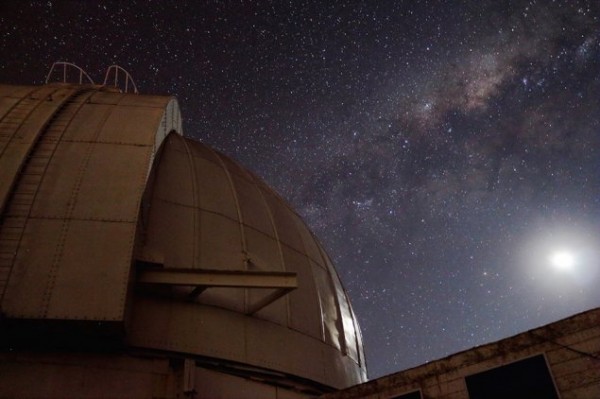 The Australian National University, together with the ABC, is literally reaching for the stars this week in order to break its own stargazing Guinness World Records title set three years ago.

It will host the Canberra Star Party event on Fellows Oval on Wednesday 23 May from 7 pm to 10 pm as part of the Guinness World Records attempt, which will take place from 8 pm to 9 pm.

You will stargaze at the Moon through a telescope or binoculars for a 10-minute period, along with thousands of participants across Australia.

The ANU’s Mount Stromlo Observatory holds the title for the Most people stargazing at multiple venues – 7,960 participants across 37 locations in Australia looked up to the night-sky simultaneously on 21 August 2015.

Dr Brad Tucker from the ANU Research School of Astronomy and Astrophysics, who organised the record-breaking effort in 2015, is urging Australians to get involved in the new attempt on Wednesday.

“Astronomy is a way to get everyone interested in science and with the future Australian space agency on the way, there’s never been a better time to look skywards,” Dr Tucker said.

“The great thing about this Guinness World Records attempt is that anyone anywhere in Australia can take part and I can’t wait to break our record from three years ago.”

The Guinness World Records attempt will coincide with the ABC’s Stargazing Live TV event broadcast from the ANU Siding Spring Observatory. Hosted by Professor Cox and popular TV personality Julia Zemiro, Stargazing Live will air at 8 pm on ABC and ABC iview on 22, 23 and 24 May 2018.

ANU and the ABC are planning stargazing parties across the country on Wednesday in an effort to smash the 2015 mark.

Dr Tucker will also lead a citizen science project with ANU Research School of Astronomy and Astrophysics colleague Dr Anais Möller to search for new exploding stars in space, known as supernovae. Scientists use supernovae, which are explosions as bright as 100 million billion billion billion lightning bolts, as light sources to measure the Universe and acceleration of its growth.

The ANU project will allow citizen scientists to use a web portal on Zooniverse.org to search through images taken by the 1.3-metre SkyMapper telescope at the ANU Siding Spring Observatory.

“People can help us find exploding stars by scanning the SkyMapper images online to look for differences and marking up those differences for the researchers to follow up,” Dr Tucker said.

ANU SkyMapper is the only telescope that is doing a comprehensive survey of the southern sky looking for supernovae and other interesting transient events at these distances.

Dr Möller said the first people to identify an object that turns out to be a supernova will be publicly recognised as co-discoverers.

“We recognise citizen scientists by listing the first three people to find a previously unknown supernova in the discovery when we report it to the International Astronomical Union,” said Dr Möller.

Join the search for exploding stars at www.zooniverse.org/projects/skymap/supernova-sighting.

The University, in association with the ABC, will also produce an educational program for high school students across the country.

Produced by Dr Tucker and the ANU Research School of Astronomy and Astrophysics, it will be live streamed nationally before and after the ABC’s broadcasts.

“Last year’s broadcast was a fantastic showcase of the scientists we have working here at ANU and all across Australia,” Dr Tucker said.

“This year, we will see even more by exploring our Solar System, what we are doing to discover more about it, and learning about our place in the Universe.

Anyone can register to attend the ANU stargazing event at www.anu.edu.au/events/stargazing-world-record-attempt-anu-canberra-star-party.

@The_RiotACT @The_RiotACT
Misplaced for decades, the drawings and meticulous records of Goulburn #architect EC Manfred eventually saw the light thanks to the dedicated efforts of #volunteer historians, plus a little bit of luck https://t.co/Ga0Bn2B66D (36 minutes ago)