Watch out! Those tentacles still have some sting in them. Photo: Ian Campbell.

The Bluebottles washing up on Eurobodalla and Bega Valley beaches this week appear to be of another world and in many respects, they are.

Not one creature but many, these duel-sex visitors to the Far South Coast are a collegiate group, each with a job to do before being blown ashore.

“They’re actually a colony of several animals, all with specialised functions – feeding, catching prey, and reproduction.

According to the Australian Museum, the Bluebottle is a colony of four kinds of highly modified individuals known as ‘zooids’, and come from the same family of life that includes coral and sea anemones.

“The zooids are dependent on one another for survival.

“The float (pneumatophore) is a single individual and supports the rest of the colony.

“The tentacles (dactylozooids) are polyps concerned with the detection and capture of food and convey their prey to the digestive polyps (gastrozooids).

“Reproduction is carried out by the ‘gonozooids’, another type of polyp,” The Museum says.

“There have also been some pretty big seas lately,” Ms Wood says. 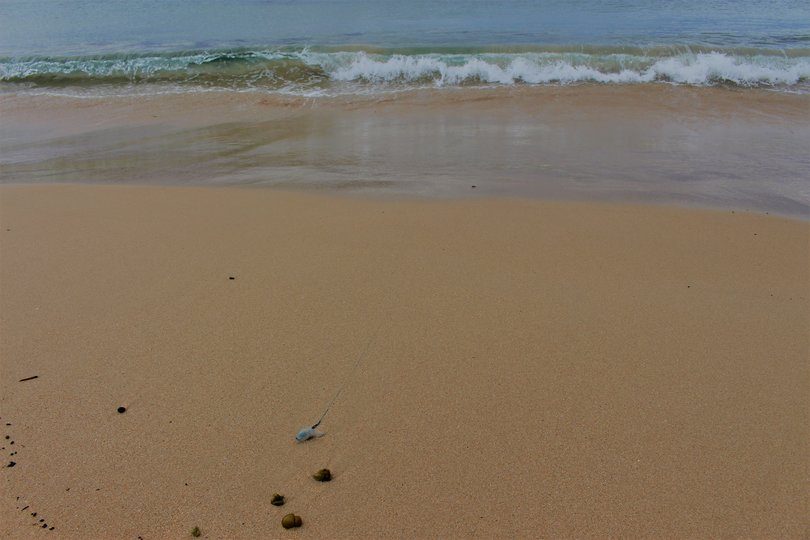 If only this guys float pointed the other way, he/she might still be at sea. Photo: Ian Campbell.

The Bluebottles famous float can grow to over 15cm, it’s job is to sail the colony across the ocean surface capturing the breeze with its aerodynamic shape. A degree of muscular contraction in its crest gives the Bluebottle a sense and skill similar to a holidaying windsurfer.

“The float may project either to the left or to the right; the left-handed forms sail to the right of the wind and vice versa,” The Australian Museum explains.

So, if the sailing angle in one float leads to its stranding along the high tide mark, the pitch of another’s will see it sail to the opposite side of the wind, escaping the hot sand.

A neat survival trick that maintains the population even when Far South Coast beaches are blanketed in dried and popping specimens.

Food and reproduction drive life and Bluebottles have some impressive tools to call on.

Their stinging tentacles drift downwind for up to a metre capturing food in their wake. Responding swiftly to the presence of food, they twist and tangle prey, and “become all mouth” to digest their meal.

A range of enzymes are deployed to break down proteins, carbs, and fats across a menu of small crustaceans and surface plankton.

Reproduction is another impressive Bluebottle trick that helps it’s species survive on the high seas.

Bluebottles are hermaphrodites, they carry female and male parts.

“Awesome, I love that so many marine creatures are hermaphrodites,” Ms Wood says.

“And sometimes they’ll wash up on the beach with a variety of other really beautiful ‘blue’ animals like Glacus atlanticus or the ‘Blue Dragon’ – also hermaphrodites. 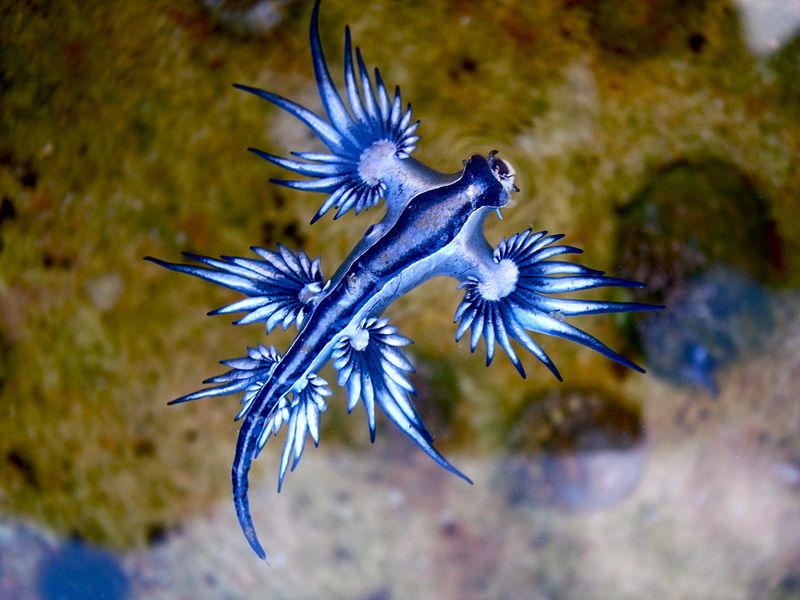 While all this is interesting, from a human perspective avoiding the stingers and knowing what to do if stung is front of mind during a day at the beach.

“The best treatment for a sting is hot water, a shower as hot as you can without burning does the trick.

“And if hot water isn’t available, ice is a good alternative after you have washed the tentacles away,” Mr Edmunds advises.

“Swimming at a patrolled beach this summer will ensure that first aid is close at hand from lifesavers.”

And be aware beachcombers, as thousands of Bluebottles lay shipwrecked on local beaches this week the toxic mixture they use to immobilise and digest their prey is still active and can sting you, however the contractions that trap their marine victims become inactive.

Bluebottles are awesome, the sting they can inject into a day at the beach instinctively demands our respect, but so to should their survival skills.