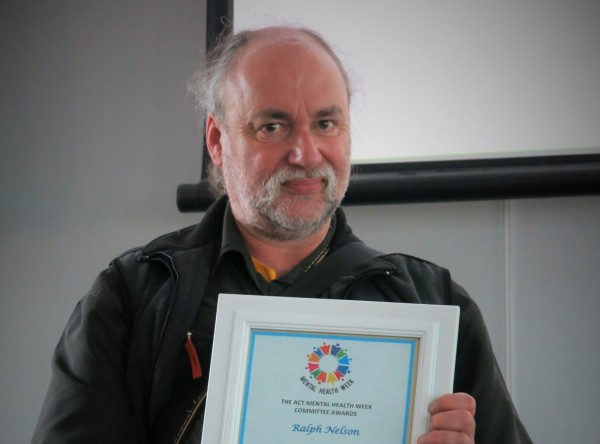 Mr Nelson is a local writer, artist, gardener and poet and has spent much of his life contributing brilliance and beauty to the local landscape. When awarded the $500, Mr Nelson said he ‘concocted a plan in my crazy head to spread the good fortune as far as I could’. He purchased his first digital camera, joined Facebook and started a YouTube channel.

As of this month, the Noslenrat YouTube channel has published over 850 videos with views exceeding 416,000 in 210 countries. There are 246 subscribers to his YouTube channel and his videos have been used by newspapers and magazines including Rolling Stone.

Alongside the YouTube channel, Mr Nelson is currently involved in multiple projects in the community from actively participating in community committees to neighbourhood gardening. Collaborating with local musician Ben Drysdale from funk and soul brass band East Row Rabble, the pair wrote an original track titled ‘Aliens in my Brain’. Mr Nelson wrote a poem that inspired this song as an attempt to portray what it may be like for someone with mental health issues to experience “hearing voices” or be overcome with intrusive thoughts.

Mr Nelson said “these feelings may be like someone else is controlling your thought processes in an ‘alien’ way. I used simple well known iconic science fiction images to portray the symptoms of helplessness, memory deficiency, anger and loss of self control”. Together Drysdale and Nelson extended “this spaced out journey so that it actually feels like an experience of a dangerous unwanted journey, although there is also an amusing element to it.” ‘Aliens in my Brain’ is being released this Saturday in celebration of Mental Health Week.

Not one to have idle hands, Mr Nelson is showcasing both his poetry and photography tonight at Smith’s Alternative as part of a project forged by The ACT Mental Health Consumer Network for Mental Health Week 2016. “The Lived Experience” is an anthology of poetry written by mental health consumers. Mr Nelson and other contributors will be given an opportunity to read their poems and everyone is welcome to attend. The poetry anthology will continue to be promoted throughout Mental Health Week at Smith’s.

Next time you have a windfall, think about how Mr Nelson chose to spend his and whether there might be a way you can make a difference too.

8 Responses to If you won $500, what would you spend it on?
Filter
Showing only Website comments

Look at the headline again before being judgemental.

I looked at the headline before I commented. And I just looked at it again. No change to my judgemental comment.

Look at the headline again before being judgemental.

Good on him. I’m pleased that money helped him to work towards his goals, and to benefit others – what an asset he is to his community.

$500 would go towards my registration coming up, but it won’t cover it all.
It could also buy my daughter school uniforms for next year, two or three week’s worth of groceries, two months of home internet/phone/mobile, or I could simply whack it onto one week of home mortgage payment. So many bills to choose from, all necessary and unending.
$500 doesn’t go very far these days, it is only half a week’s wages in reality for most Canberra workers, or in the case of someone on Newstart, it is a fortnight’s worth.
Of course it is better than nothing, but hardly something to go crazy over.

I’m disappointed dungers. If u were any sort of committed Canberrian, u would buy a yearly pass for travel on the tram. LOL

I would lose money on that deal because the tram won’t last a full year.

I’m disappointed dungers. If u were any sort of committed Canberrian, u would buy a yearly pass for travel on the tram. LOL