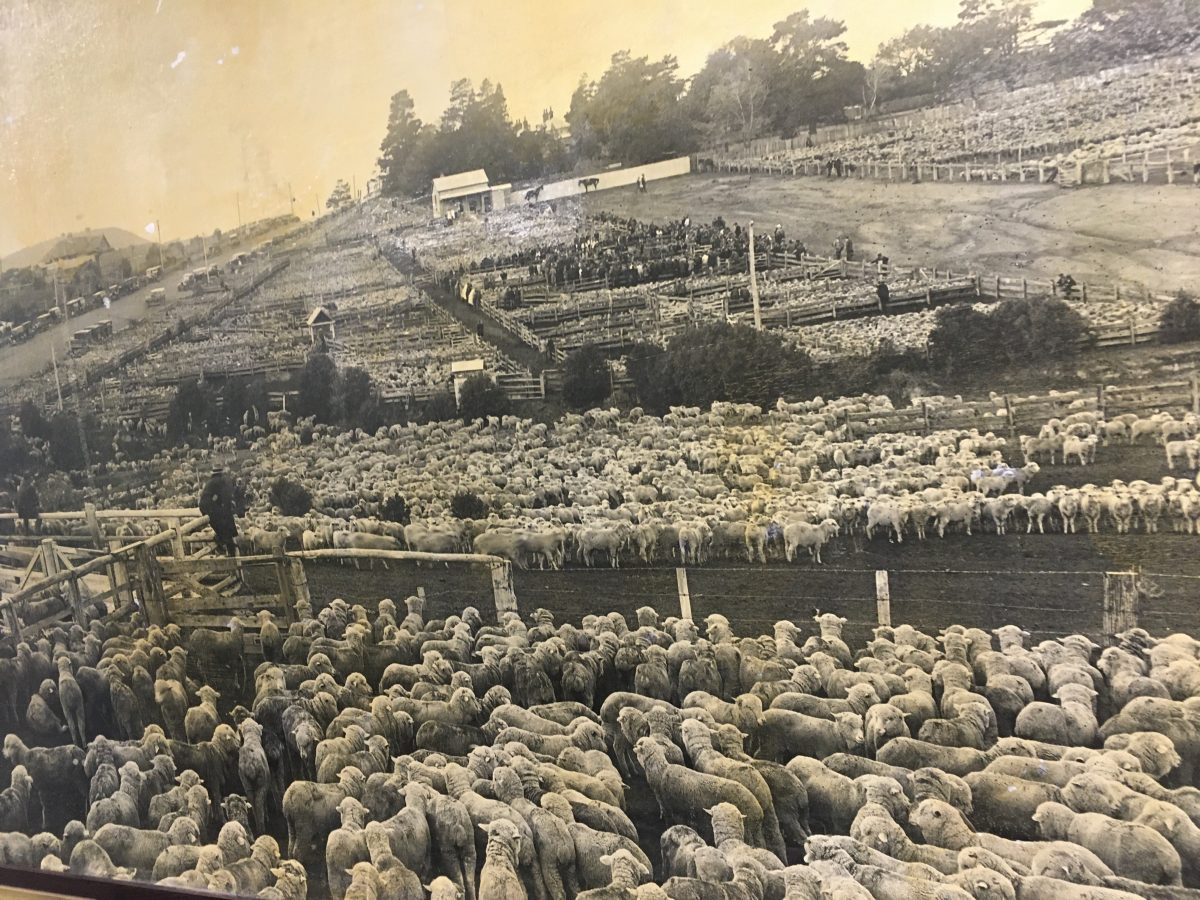 A section of the 1924 photograph so familiar to Goulburn people engaged in the livestock industry. Photo: John Thistleton.

Long before the Big Merino ram cemented Goulburn’s credentials as the nation’s wool capital, the super-sized photograph above suggested it.

Two images form the one photograph, capturing a sea of Merino sheep, horses to help with mustering and men swarming around one of the pens selling and buying at the W. H. Wheatley sale.

For many years the photo hung in the office of Goldsbrough Mort and Co. and then Elders. Legendary auctioneer and Elders livestock manager Tony Dowe who came to Goulburn in 1961, remembers the photograph.

“Wheatley was the major agent (at the time of the photograph), his firm was taken over by Goldsbrough Mort which became Elders,” Tony said. “W. H. Wheatley was a bit of a legend because he travelled all over the countryside. Bear in mind the type of marketing in those days was not electronic and not much even by phone.

“So they got in trains and travelled out into the western country, bought a lot of young sheep into Goulburn for re-sale there,” he said.

Tony arrived in the city to find yardings of about 4000 sheep on a Wednesday and 400 cattle on a Tuesday. By the mid-70s Goulburn was yarding more than 30,000 sheep every Wednesday.

Close enough to the abattoirs sheep could be walked there, and with trucking yards nearby, Goulburn seemed an obvious location for a big, centralised selling point.

“Only two agencies in NSW that would be on a par or better than Goulburn in numbers, Dubbo and Wagga Wagga,” Tony said. The then Goulburn City Council owned the abattoirs. “I had some terrible rows with the council at Goulburn, looking for improvements to the saleyards,” he said. “They wouldn’t go to the trouble to put shading or proper water fixtures there.”

The 1924 photo was taken when the saleyards were in Bourke Street where the council’s former works depot stands today.

Later relocating to the corner of Sloane Street and Finlay Road, the saleyards, which were never improved to acceptable standards, closed in 2017 after more than 93 years of operation.

“I just love this photo, it holds so many stories,” she said. “It is just what Goulburn is, we are the fine wool capital of Australia and farmers are the backbone of our country. This photo represents the farmers. Put yourself in the conversations happening there,” she said.

In 1924 W. H. Wheatley reported the sale had been attended by one of the largest group of buyers seen at Goulburn. Graziers were from Victoria, the Riverina, Monaro and southern districts who rolled up in large numbers. Buyers stayed on throughout the afternoon despite a storm and the market was described as firm.

Born at Collector, Wheatley had began his career with an auctioneering business at Gunning, and later moved to Goulburn where he continued to expand the business, later opening a branch at Wagga Wagga. (Last week Wagga held a yarding of 70,000 sheep.)

Sheep numbers on the eastern side of Goulburn have been dwindling for years, but old-timers can recall the days when the sheep stations would have spent two or more weeks walking their livestock to the saleyards. 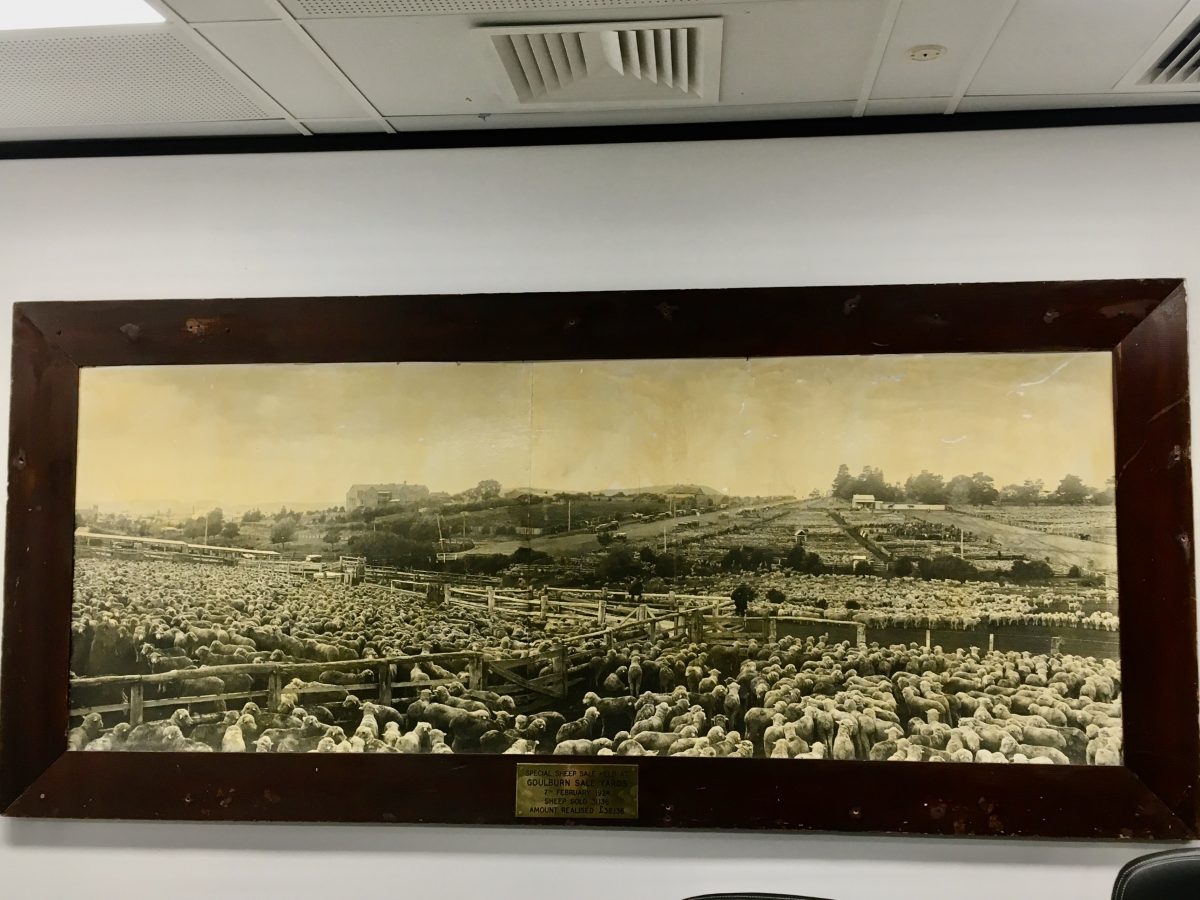 The full-size photo in the boardroom of the Local Land Services office. St John’s Orphanage is in the top lefthand corner. Photo: John Thistleton.

Former wool broker Ray Moroney, who auctioned a bale of fine wool for a world record in 1985, can recall as a boy coming across a travelling stock route near the airport where sheep would camp overnight. “Mobs of sheep and cattle and men on horses were everywhere in those days,” Ray said. “We used to walk our sheep up to a community shearing shed for shearing,” he said.

Veteran livestock agent Roger Thompson remembers when Goulburn’s sheep yardings were up to 35,000 – 40,000 in the 1980s. Dry weather mostly would see the yarding swell as farmers unloaded their animals. “In those days they were not getting good prices,” Roger said. “Today there are better prices, but in those days there wasn’t much money about.”

In the livestock game for 50 years, Roger has never seen prices as high as those being paid today for sheep. In the past three or four years the market has changed dramatically, he said.