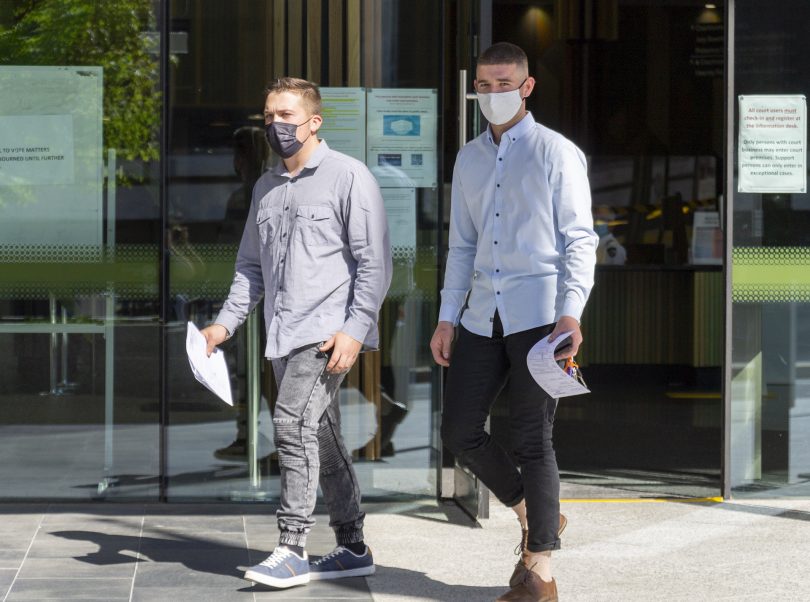 Two “inseparable” friends have avoided jail sentences for their roles in a violent brawl where one of them was “king hit”, and the other was grabbed around the throat by a security guard.

Adam Justin Fleming, 20, and Dominic Fernando Ursino, 21, were allowed to walk out of the ACT Magistrates Court on Tuesday (9 November) after they were sentenced.

Special Magistrate Jane Campbell said the pair, who had known each other since preschool, had gone to the Erindale Vikings Club in Wanniassa on 9 October 2020, where they drank a fair amount of alcohol.

Eventually, Ursino was asked to leave by security, but he resisted their attempts because he wanted to say goodbye to another friend inside the club.

He pushed against security, with Magistrate Campbell finding he was acting aggressively.

In the meantime, Fleming had come back inside the club to watch what was happening but didn’t get involved until he saw Ursino struggle with a guard who appeared to grab him around the neck and pull him down – an action Magistrate Campbell found to be “fairly aggressive”, but justified due to Ursino’s actions.

It was then that Fleming pushed another guard, but then the same guard who grabbed his friend around the neck “king hit” him, knocking him to the ground in what Magistrate Campbell called “a serious example of that type of action”.

“Any sort of hit to the head is extremely dangerous,” she said.

It was then that Fleming “got angry”, she said, and he unleashed a flurry of punches against this guard, hitting him in the head.

As Ursino saw his friend hit, he also tried to get involved, then punched a different guard in the head, knocking his glasses from his face.

“The security officers have a job to do and it’s already difficult enough because who they are dealing with are intoxicated people,” Magistrate Campbell told Ursino.

“You were drawn to what you saw was an attack on your friend. But of course, what you keep forgetting here is you created this situation yourself.”

Barrister Bernard Collaery said after Ursino, who works as the team leader of a line marking team, had been arrested, he had realised how “stupid” he had been and was “ashamed of himself”.

Legal Aid’s Solitaire Zahnleiter said it was unclear why the security guard who “king hit” Fleming wasn’t charged over the incident.

She argued this was extra-curial punishment because her client, who works as a tow truck driver, could have been seriously injured.

While Ursino pleaded guilty to charges that included assault and was convicted, fined $400 and placed on a 12-month good behaviour order, Fleming was not given any convictions for his charges and only put on a good behaviour order of the same length.

Magistrate Campbell said the brawl was caused by Ursino’s actions. She said as Fleming only joined the affray when he saw the security guard grab his friend around the neck, she could not find he created the situation.

She also accepted the possibility that Fleming could lose his tow truck licence if convicted to be the special circumstances required for her to not record a conviction for him.