Is the obstruction rule to blame for Raiders' third loss on the trot? 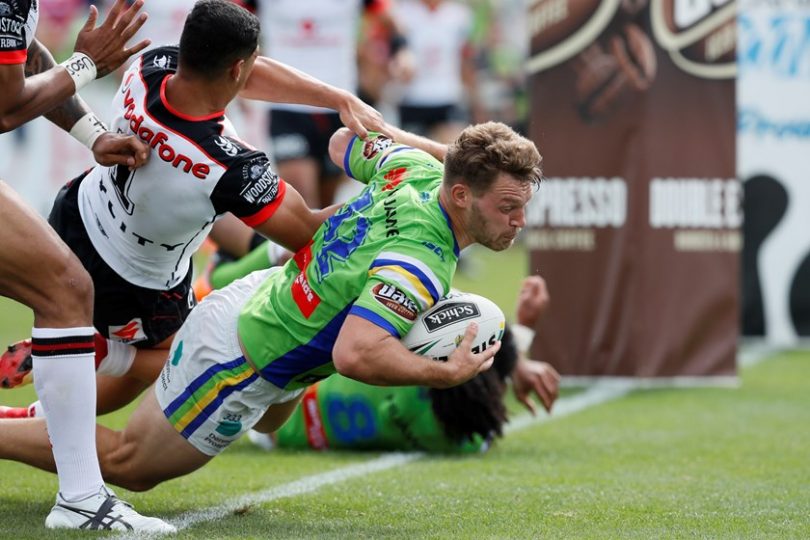 Canberra lost eight games by six points or less in 2017 and have dropped their opening three games this season by two points or less. Photo: Supplied by Canberra Raiders.

The Raiders lost their third match in a row and yet again it was in the dying stages of the match when they let their lead slip from their grasp.

But after their 20-19 last-minute loss to the New Zealand Warriors at GIO Stadium on Saturday afternoon, Raiders coach Ricky Stuart turned to the disallowed try against the Raiders to excuse the side’s last two losses. Stuart said he was baffled by the interpretation surrounding the obstruction rule and the rule was “ruining the game”.

The Raiders had a try ruled out due to obstruction when Junior Paulo crashed over from close range because referees decerned that Luke Bateman had obstructed the Warriors player on the line.

If the try had been allowed, the Raiders would have led 25-6 in the 52nd-minute, which possibly could have been too big a comeback for the Warriors to mount.

Instead, the try was disallowed and just minutes later the Warriors crossed to cut the Raiders lead to just seven points.

The decision on Saturday night was similar to an incident last week when the Raiders conceded a try despite halfback Sam Williams being obstructed in the build-up to Tautau Moga’s try.

In case you have forgotten, the Raiders ended up losing that match by two points.

Stuart said in the press conference after Saturday’s match that he had “never seen the game in such a state of affairs” and was bewildered by the interpretation of the obstruction rule.

“We have not identified what’s an obstruction in this game. And I’ll get called a whinger and a sook, but that doesn’t worry me what people think and say about me. We as a game have not got a handle on what is an obstruction, they’re guessing.”

Stuart said he will be waiting for a call from NRL chief executive Todd Greenberg to help explain the confusion that’s engulfing the coaches, players, referees and fans.

Stuart said the referees didn’t have a “black or white” rule book to work from and said it was up to Greenberg to fix the problems that were “ruining the game”.

“I’ve never seen the game in such a state of affairs in regards to what’s happening at the moment in terms of interpretations,” he said.

At the end of the day, are Canberra’s losses coming from the lack of a “black and white” rulebook or because they cannot win tight matches and defend a lead?

So, is the obstruction rule to blame for Raiders’ third loss on the trot?

Maybe Ricky Stuart and his coaching team should look at the Raiders inability to defend their lead in the last five minutes rather than look to the rulebook for excuses.

Do you think that Stuart is right in blaming the obstruction rule for their loss on Saturday afternoon?