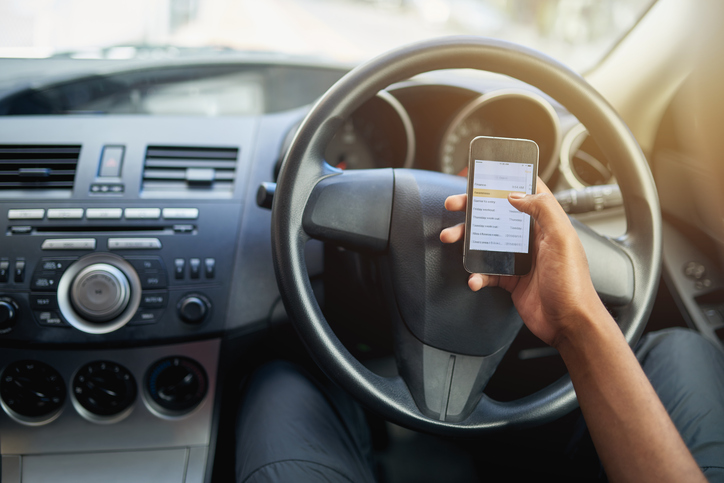 Looking down for two seconds at 60 km/h means you have covered more than 33 metres without watching the road. Photo: File.

To many, the thought of being out of touch for 20-odd minutes is too much to bear. Bluetooth and screen-mirroring technology might have taken some of the heat out of it, but the temptation to hold, touch, look at and use our mobile phones while driving can be strong.

Yes, there will be a hefty fine of $416 and three demerit points if the police catch you.

The danger is also clear. At 60 km/h, for example, looking away from the road for even two seconds means you’ve covered more than 33 metres basically blind.

But you know this. And you also know you have tried to reduce your use and it hasn’t always worked. You’re not alone there either.

According to statistics from Budget Direct, about 60 per cent of Australian drivers have admitted to using a mobile phone that isn’t hands-free while driving.

The Australian Automobile Association (AAA) has just the thing for you.

It’s called Drive in the Moment, a new online platform designed to help you train your brain to break the habit for good. And we know it works, because a team of psychologists at the University of Canberra (UC) spent most of last year putting it to the test.

AAA research manager Kate O’Donnell says it was born out of a desire to curb the number of road deaths among young people. Drivers aged 17 to 25 represent one-quarter of all Australian road deaths, despite only making up 10 to 15 per cent of the licensed driver population.

“It was hypothesised that perhaps some of it had to do with the fact a lot of young people are addicted to their smartphones before they even begin driving, and this addiction flows through to when they are driving.

“After all, we know that distraction is a key contributing factor for young people, and mobile phone use is a subset of that.”

Deeper digging by the Queensland University of Technology revealed the who, what, when, where, how and why on young people picking up their phones while behind the wheel. However, Kate says they realised terming it an “addiction” didn’t do wonders for solving it.

“Young drivers didn’t view themselves as being addicted, so as soon as you use that messaging, you lose them.”

The AAA turned to a UK-based psychologist for help with nailing an approach. They settled on a contingency-type plan to encourage young people to plan ahead so they didn’t feel the need to pick up the phone while driving.

“We want to encourage people to think more about the mobile phone usage and come up with a plan for when their phone rings,” Kate says.

“The idea is to build neural pathways, so – for instance – when I’m stopped at the lights on the way home from uni, rather than call mum to let her know I’m on the way, I will call her before I leave uni.”

All the “boring facts and figures” were handed over to a creative agency to then produce an interactive digital platform. But before the AAA attempted to spread the word on Drive in the Moment, it had to be sure the tool would work.

“Now that we developed it, we wanted to evaluate its effectiveness,” Kate says.

Dr Tricia Brown is an Associate Professor within the Centre for Applied Psychology at the University of Canberra. She and a team of two other researchers led a psychology-based evaluation into the platform between February and October last year.

“We recruited people from all over Australia and divided them into two groups,” she explains.

“One group was guided through the platform, from the risk-rating tool to devising a plan, while the other group was simply briefed on the road rules around mobile phone use.”

The findings were exactly as they hoped.

“If we compared what they told us before our intervention to afterwards, mobile phone usage at the wheel dropped significantly,” Tricia says.

It was hard to know exactly what part of the tool had the most impact “because different people made different plans”.

“But there was definitely an effect. Something had changed in terms of reducing mobile phone usage while driving.”

Now armed with this evidence, the AAA is preparing to push the platform to motorists across Australia through its various motoring clubs. In the ACT, that’s the National Roads and Motorists Association (NRMA).

Kate says the shelf life of the tool is basically “indefinite” but that AAA will continue to work with UC on future road safety projects.

You can try it out here.