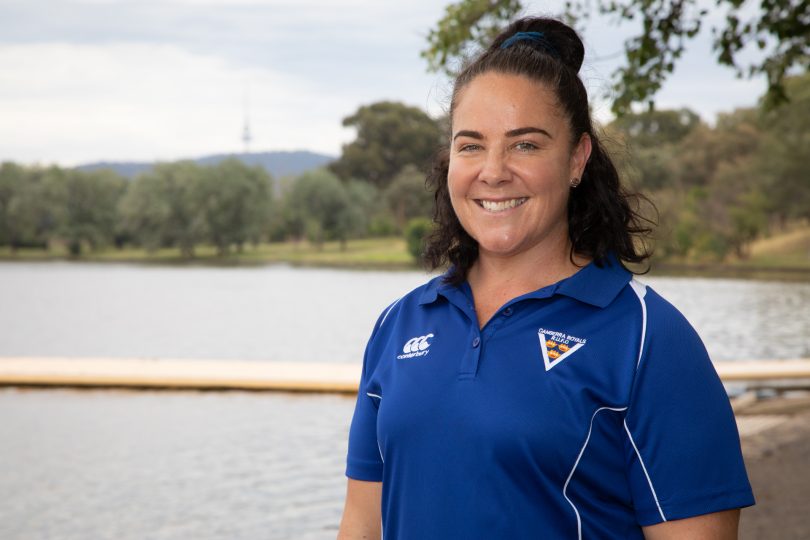 Louise Burrows from the Canberra Royals has been playing rugby since 1995. Photo: Michelle Kroll.

Louise Burrows has played rugby with the Canberra Royals since 1995, and also steps up as a prop for the Brumbies, and for the first time in a quarter of a century, she will finally be able to use a female change room with her team instead of changing on the sidelines or in the men’s sheds.

“Since my first year of rugby, the facilities have not changed at all,” Ms Burrows said.

“There has been no progression as the women’s game has progressed and grown significantly, so this is huge for us to have our own changeroom in the Royal’s community.

“It is really awkward because you often need to change your jersey on the sideline – that is a regular occurrence – but there have been times that there are no change rooms or facilities around Canberra, so you are changing your shorts on the sideline as well.

“It can be quite uncomfortable and something that is not very inviting for young girls coming through to have to do.”

Women’s sheds, lighting upgrades and new pavilions are more than just the physical infrastructure for the players, they signify the recognition that women’s sport is now receiving through a variety of funding initiatives from governments. 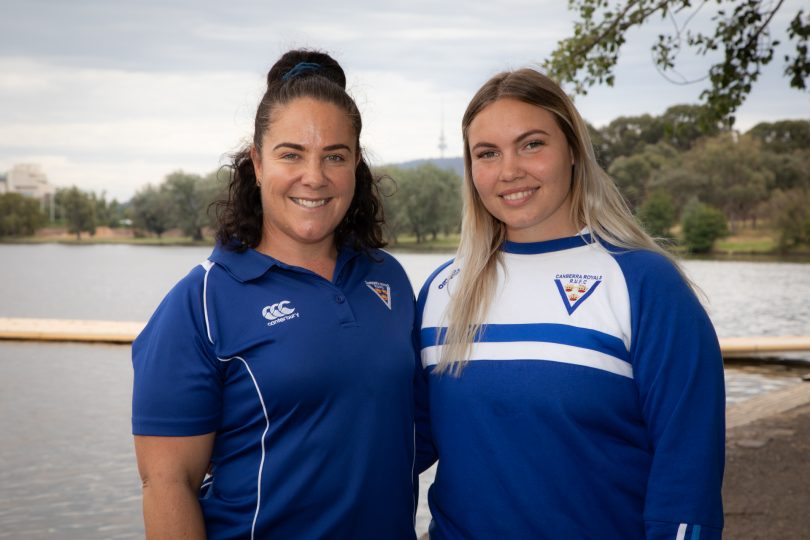 Niki Paterson, an Indigenous player from the Northern Territory who has come down to Canberra to join the club this season, relayed how it felt to have women’s sport appreciated and recognised with new amenities that many of the men take for granted.

“It gives you more drive to keep going and keep playing,” she said.

“When I first started, women’s sport was not really big or announced, and now that we are getting funding for these new facilities, it definitely grows the game and the sport.

“We play because we also want to grow the game, so to see this facility being built, it is like all the hard work over the years is coming together and it is really exciting to be a part of it still.”

For many women and people with children, changing at home is not an option, Ms Burrows said.

“It is not like we get changed at home and go to the ground, some of us are mums so we are at sporting events with our own children or we come from work,” she said.

“Often in the changeroom, it is also where you come together as a team and you have that bond, play some music, dance and really get that vibe.

“To be able to do that and then walk out onto the field as a team will be huge.”

The ACT Government is putting aside $1.25 million over the next two years to plan and design new sporting facilities across the Territory.

This includes $400,000 for planning and design works for a new permanent home for dragon boating at Grevillea Park on Lake Burley Griffin with a new boathouse, storage facility and a spectator area. 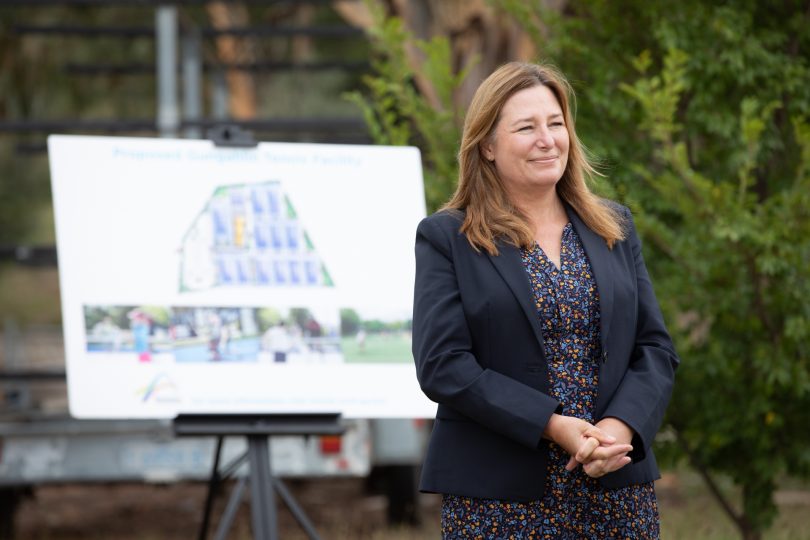 When asked why it took so long for community sports clubs in Canberra to have female-specific changing rooms, Sports Minister Yvette Berry said the age of Canberra’s sporting infrastructure meant female participation was not in mind when the facilities were built.

“Some of the sports facilities in the ACT are quite old, and they were built for men, by men, for men’s sport,” Ms Berry said.

“There was never any consideration that women would be playing the sports they are participating in today.

“What we are seeing now is real growth in women’s sport. Women and girls broadening their horizons and playing the sports that they want to.

“We need the facilities that meet this new change to our sports. Changing on the sideline, or in the car or in the men’s changerooms is not OK.”

10 Responses to “It is not ok to change on the sidelines”: change rooms bring dignity and recognition to women’s sport
Filter
Showing all comments
Show only Website comments
Show only Facebook comments
Order
Newest to Oldest
Oldest to Newest

The Hall Bushrangers R.F.C are trying to field a women’s 10s team this year. Our current facilities consist of a stable...

Running water would be nice, change rooms would be better. Any kind of government funding or assistance seems like a dream...

Have a look at Clearing house for sport, a government website that gives loads of information about grants in each state/territory.

Also, check out the published report on www.grants.gov.au for similar funding. The Albany Creek Crushers RL club got $600k for, amongst other items, women's changerooms.

I am really pleased with the leadership of the Club and Government that will see this really important upgrade happen.

Thanks Minister Berry and ACT Government and officials, Michael , Dougal, Bill and Chris for all your hard work. I may have Loyalty with another club, but this, and the increased accessibility, is really important.

The next thing we need to work on is suitable change rooms for junior sport. Young girls (and boys) need to have appropriate facilities, too. This will keep juniors in the sport over their teen and young adult years.

Great story! Let's hope other sporting organisations and work places can make the change too!

This is fantastic! So happy for you. Great article, Louise!

JC - 2 hours ago
What sections of stage 1 are poorly designed and need fixing. As for the traffic lights you gotta be kidding right? As both a... View
Capital Retro - 4 hours ago
Three things to remember about the light rail: 1. The Greens want it. 2. It's all about urban renewal; it was never about pub... View
bj_ACT - 5 hours ago
I think you’ve raised some valid questions. There might well be valid answers from the ACT Government to those questions. I... View
Opinion 8

Melissa Hobbs - 2 hours ago
Need to sort out the health care system in the Berra. Worst in the country View
Sport 4

Capital Retro - 7 hours ago
"The data is only accessed by ACT Health if it is needed for contact tracing purposes and contact details are deleted after 2... View
garyfrancis - 15 hours ago
Under what rule, law or legislation is this being bought to us via? View
garyfrancis - 15 hours ago
Argo please. The 28 day "guarantee" really? Who is going to get caught holding onto the information for more than 28 days? Wh... View
Property 36

jorie1 - 8 hours ago
These changes are ridiculous and will only force landlords in the ACT to sell up. It is already not financially viable to hav... View
Maya123 - 10 hours ago
The best time to get houses upgraded would be when the house is sold. This would then cover both rentals and owner live in ho... View
Acton - 13 hours ago
First will be calls from tenant lobby groups for mandatory roof insulation, then better blinds and curtains, double glazed wi... View
What's On 8

The developer of the problem-plagued Gungahlin pool has been absolved of liability for building defects, including if further damage or...
Opinion 8

When we first arrived in Canberra in 1995, my boys google-eyed at the grand entry down Northbourne Avenue - the...
Lifestyle 32

Canberra's Samantha Harvey has quickly become a favourite on Nine Network's latest season of Married at First Sight, not only because...
Food & Wine 11

The developer of the problem-plagued Gungahlin pool has been absolved of liability for building defects, including if further damage or...
Sport 35

Louise Bilston’s involvement in the sport of netball is extensive, from player to coach, administrator, board member and president. When...
Property 25

Canberra home prices rose another 2 per cent in February amid a rush to buy into a market in full...
Community 25

A documentary made by a Batemans Bay filmmaker about keeping Australia's oldest show on the road is one of five...
News 21

@The_RiotACT @The_RiotACT
Our latest weekly newsletter is out, recapping all the top local stories of the past seven days. Subscribe to get it in your inbox each Thursday https://t.co/sif1Mnd065 (2 hours ago)

@The_RiotACT @The_RiotACT
Rodney Plumb’s workplace has one of the best views on the South Coast, but when the massive new Batemans Bay bridge opens, the 78-year-old will be out of a job https://t.co/3qW3E9sZIB (3 hours ago)

@The_RiotACT @The_RiotACT
The Save the Narrabundah Peafowl group will put its issues with road safety and speeding motorists to the ACT Government after the deaths of several peafowl in the area https://t.co/QxMNzZFXoT (5 hours ago)