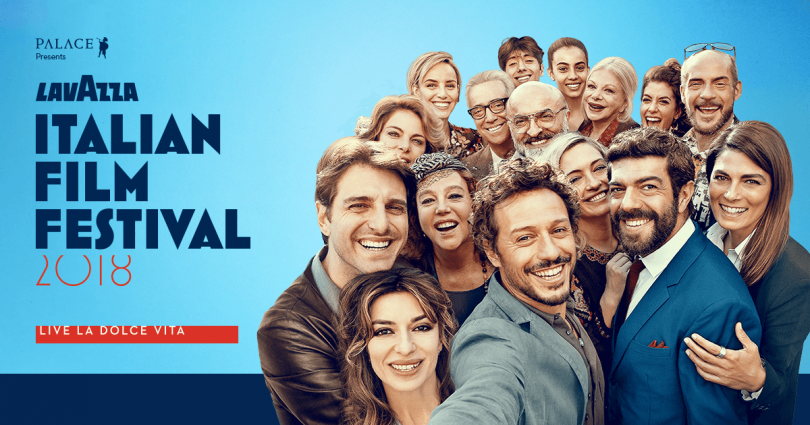 One of the blessings of living in a multicultural Australia is our regular exposure to world cinema through an abundance of quality film festivals. In our cosmopolitan capital Canberra, Palace Electric Cinemas in partnership with Lavazza are again proud to present our annual installment of Italian eye-candy.

Featuring a huge line-up of 37 films, the 2019 Lavazza Italian Film Festival takes place from 12 September – 7 October so you have almost a month to savour the biggest festival of Italian film outside of Italy. Australians clearly love European cinema as we are home to the biggest French film festival outside of France also. Palace Cinemas Australia is the privileged partner and perennial presenter of the Lavazza Italian Film Festival which, this year, is one of the biggest yet.

There will also be a four-film spotlight on Turkish-born Italian film-maker Ferzan Ozpetek, a couple of short films from Bulgari, as well as a couple of documentaries.

Winner of five 2018 David di Donatello (Italian Academy) Awards, Love and Bullets enjoys a Canberra special event on Wednesday 17 September, where guests will be treated to blood orange and bitters Sofi spritz on arrival, and live pre-screening entertainment ahead of what has been described as a “playful mafia musical”. See it to believe it.

My top ten picks for the festival:

Loro – A searing exposé of the often-times debauched Prime Ministership of the larger-than-life and polarizing political figure, Silvio Berlusconi. Split into two parts on its Italian release, the compelling epic is presented here in its entirety.

Ferrante Fever – a documentary which looks at the cultural phenomenon of writer Elena Ferrante whose self-imposed anonymity has added a beguiling mystique and captivating allure to her novels which have seen her listed in Time magazine’s 100 most influential people in the world.

The Brave Ones – Sardinian-Australian director Lisa Camilo returns to Sardinia, the island home of her youth, to find that is been corrupted and polluted by ruthless exploitation for economic interests in a documentary which seeks to galvanise a community into restoring the island to its former social and ecological glory.

Couch Potatoes – a famous TV presenter who is a separated father experiences serious existential angst as he struggles to relate to his adolescent son in this intimate portrait of a Milanese family and inter-generational misunderstanding. Adapted from Michele Serra’s eponymous novel crafted as a series of letters from father to son.

Woman’s Name – a young mother relocates and takes up work in an elderly residence only to realise there are certain undisclosed expectations for female employees which will place her in a legal battle to retain her dignity with the help of a female rights lawyer as she embarks on a collision course with other staff members and the Roman Catholic Church.

Boys Cry – two teenage best friends find themselves thrust headlong into the Roman criminal underworld but, with differing aptitudes for the nature of the work, their loyalty to one another will be tested by the dangerously dynamic machinations of the mafia.

The Girl in the Fog – a foggy (literally and figuratively) mystery set in a remote mountain village as an experienced, enigmatic detective struggles to uncover the truth behind the sudden disappearance of a fifteen-year-old girl in a complex community. Author of the original best-selling novel, this is Donato Carrisi’s directorial debut as he adapts his own source material for the screen.

The Guest – following an unexpected yet perhaps unsurprising relationship breakdown, near 40-year-old Guido is reeling from the emotional upheaval and unable to be alone. As he begins interloping among friends and family to get back on his feet, he also inevitably becomes a fly on the wall and unique spectator to the frailties and commonalities of relationships.

The Order of Things – a challenging look at the migrant crisis between Italy and Libya as an employee of an Italian Interior Ministry migration task-force finds himself breaking a cardinal rule: migrants are numbers, not people. As he finds himself personally drawn to the plight of a young Somali woman, he must decide whether to follow his moral or professional compass.

With literally over 100 sessions already scheduled for the duration of the festival, there’s every chance to see some films. Encore sessions of the more popular titles will also be scheduled towards the end of the festival. Carpe diem! (Latin, yes. But still applicable.)

All films have English subtitles.

More information on the festival HERE.

Pick up the Official Programme at Palace Electric Cinemas in NewActon.

Tickets available online or at the box office.

Anthony Beck - 29 minutes ago
Why can some training companies continue face to face training, and in a classroom environment, but transport training cannot... View
kenbehrens - 1 hour ago
Roy, I've always been concerned about the active type of exerciser. The runner, the cyclist etc and how that type of activity... View
Kari James - 1 hour ago
I would find this job incredibly difficult and stressful - great work team! View
News 22

Capital Retro - 33 minutes ago
Your comment is well founded because in the USA limitations of land use for these abominations is now being exceeded (see vid... View
Ellen Duggan - 5 hours ago
My only comment is that I live at Crookwell and I find them an eyesore....The landscape is ruined and I know they don't work... View
Business 16