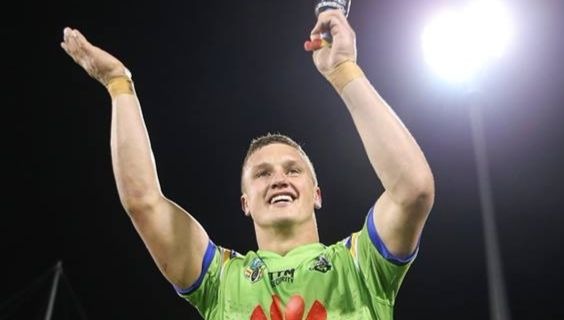 Canberra Raiders Jack Wighton has pleaded not guilty to nine charges following an incident outside a Canberra nightclub on February 3.

The fullback will fight allegations that he assaulted people in an alleged brawl outside Civic nightclub Academy earlier this year while celebrating his birthday.

The 25-year-old faced the ACT Magistrates Court on Wednesday morning (11 April) where he pleaded not guilty to three charges of assault occasioning actual bodily harm, five counts of common assault, and public urination.

The case was listed for hearing on July 10, with the hearing expected to take one day and would include CCTV of the alleged incident.

The NRL Integrity unit has been investigating the incident along with ACT Policing and it is believed that the police have examined the CCTV footage of the incident involving Wighton.

The father-of-two’s alleged role in the brawl is one of a long list of off-field misdemeanours at the Canberra Raiders in previous years.

The Canberra side has shown that they will not tolerate off-field bad behaviour after sacking Todd Carney (2008), Joel Monaghan (2010), Josh Dugan (2013) and Blake Ferguson (2013) for indiscretions.

In a club statement released on Wednesday morning (11 April), the Raiders said the club would allow Wighton to continue to play while the case was ongoing.

“The Club will allow Wighton to continue to train and play with the club during this period. As the matter is before the court, the Raiders will not be making any further comment on the issue,” the statement said.

“The Raiders continue to work with the NRL Integrity unit and have informed them of the latest developments.”

Wighton was named on Tuesday (10 April) in a 21-man Raiders squad to face on the Eels on Saturday night.

Reece Williams - 1 hour ago
Eliza this would be ideal View
George Frilingos - 22 hours ago
Angelina Mamatas are you still interested? Huge investment. We would need a great business plan, and with people not able to... View
Food & Wine 28

Rohit 'Swarley' Singh - 4 hours ago
The old demand a 50 upfront then charge you cause you're cooked again View
Buck Johno - 17 hours ago
From what I remember of night rider busses it was only over summer. View
News 7

theroundone - 8 hours ago
Who's getting punished, though, asides from law abiding rates payers in this city? A racial or sexist epithet is treated more... View
Capital Retro - 21 hours ago
Violent home invasions targeting keys for owners' luxury cars are now out of control in Canberra. Very few details are subjec... View
News 11

Meg Redmond - 9 hours ago
It’s a waking nightmare Linda Gee the only flight I was able to see tday was 24,000 economy one way View
Linda Gee - 10 hours ago
Jeez, that's not good. 😥 View
Meg Redmond - 11 hours ago
I’m not sure it is Linda Gee he is struggling to get one at 4000.00 showed available to me yesterday he tried to book it an... View
Food & Wine 1

dolphin - 22 hours ago
love her work all along the light rail. Canberra is a fabulous place for public art.... View
show more show less
*Results are based on activity within last 7 days

I am standing on the veranda of Kynefin, feeling conflicted. Meeting friends to experience the café’s pint-sized picnic table feast, I have just...
Property 30

@The_RiotACT @The_RiotACT
The ACT Government's about to launch its biggest-ever domestic tourism marketing campaign. What experiences would you promote to Australia? https://t.co/Oe3GbmEsGw (51 minutes ago)

@The_RiotACT @The_RiotACT
ADF veterans, first responders and emergency services are invited to lunch at Siren Bar on Australia Day by the APPVA and Effective People https://t.co/8SSUsQUmhu (2 hours ago)

@The_RiotACT @The_RiotACT
Gungahlin will swelter through this weekend's heatwave without the 50-metre pool, and the government has no idea when it will be open again https://t.co/dWobPkVA6t (4 hours ago)