15 May 2022 | John Thistleton
Start the conversation 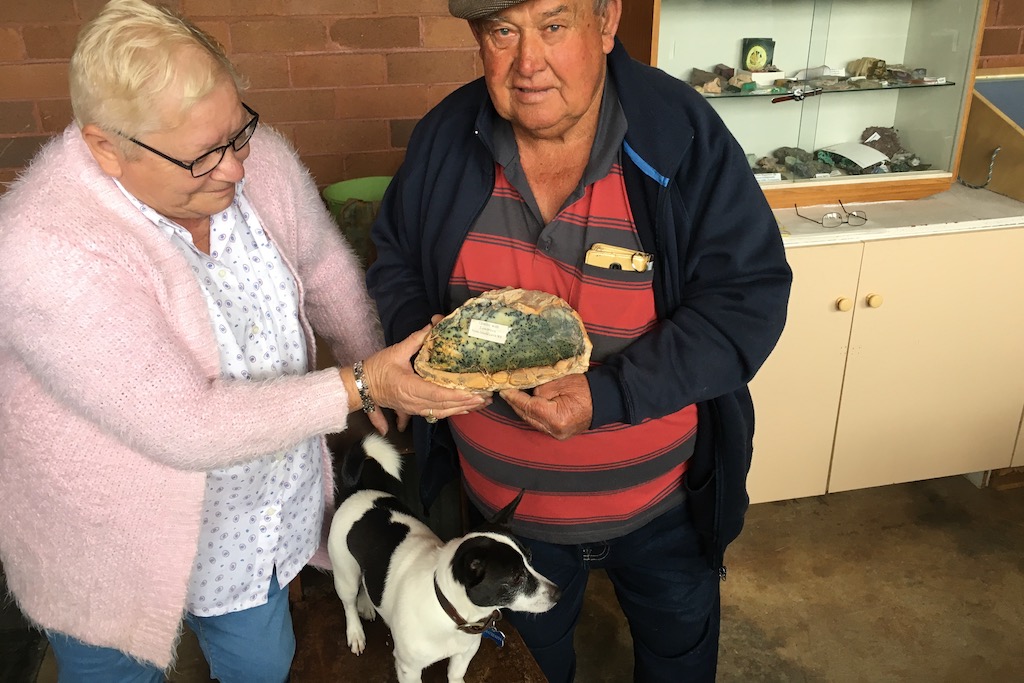 Joe and Sue O’Neil with Tubby the dog and one of their trophy rock formations. Photo: John Thistleton.

One blazing hot day, Goulburn couple Joe and Sue O’Neil visited the opal fields of Lightning Ridge in north-west NSW for an introduction to fossicking.

“The white dirt off the opals burned worse than the sun, but it was worth it,” Sue said.

They fossicked through a mullock heap and in a nearby old school yard, collecting beautiful little rocks.

The experience set them off on fossicking forays around Australia and into membership of the Goulburn Gem and Lapidary Club in 2005. Today Joe is the president and Sue is secretary, and a sought-after judge of gemstones and teacher to hundreds of school children and adults on how to cut and polish stones.

With their little terrier Tubby, they staff the club’s rooms four days a week inside Goulburn Mulwaree Council’s old works depot in Bourke Street. It’s not the most comfortable clubhouse but they’re content in their surroundings.

They have to step outside to another building when they go to the toilet. Joe and Sue are happy to stay in their leaky temporary club rooms, but the couple – and many other seniors who attend the U3A classes at Goulburn Mulwaree Council’s former Bourke Street works depot – believe it’s time to build the much-anticipated Goulburn Community Centre.

Joe and Sue, seniors groups, and numerous council-run services were relocated from the town hall in 2018 to make way for the $19 million Goulburn Performing Arts Centre.

GPAC opened recently and its line-up of national acts is drawing capacity audiences and sparkling reviews, but over the five years of redevelopment no decision has been made to build a new community centre, or where it should be located.

Community services, including respite care and social and recreational activities, are run from leased premises in the Huntley Arcade.

“This is an ideal location in an ideal building and it would not be preferable to go anywhere else,” Brian said. “We will be really happy when the council nails a peg in the ground.”

U3A, which has a 10-year lease on the site, offers French and Italian languages courses, croquet, bushwalking, mushroom foraging, science and much more in a program run by members for members.

Goulburn Mayor Peter Walker said the Bourke Street depot site on 1.13 hectares close to the central business district was ideal for a new community centre. The council previously agreed to sell the site to the NSW Police, but the deal fell through.

However council is yet to determine whether a new centre is warranted.

Cr Walker would like to see all community groups and services in the one location and anticipates a new facility would cost between four and six million dollars. He would like to see existing buildings retained and new ones added for a 120-seat auditorium, commercial kitchen and meeting rooms for the Goulburn Mulwaree Youth Council and other invited clubs.

“The council is in a sound financial position and would be eligible for state and federal government grants,” he said. “The $160,000 (annual rent for the Huntley Arcade) could be used to service a loan.”

Other potential sites have been considered, including Workspace Goulburn in Clinton Street – a co-working facility which offers spaces for hire, meeting rooms and kitchen facilities.

Cr Bob Kirk proposed a new community centre in 2011, and included potential plans and costings. He said the proposal was added to a list of other projects and more pressing needs received the council’s priority in the years ahead.

Cr Kirk said all options needed to be considered, given the cost of a new centre.

“If a new community centre is needed, the old Bourke Street depot site may be an option, but other sites should be considered as well, and that site so close to the CBD could be offered for sale for some other development,” Cr Kirk said. “I am open-minded on the issue.”

The issue will be back on council’s agenda in the new financial year.