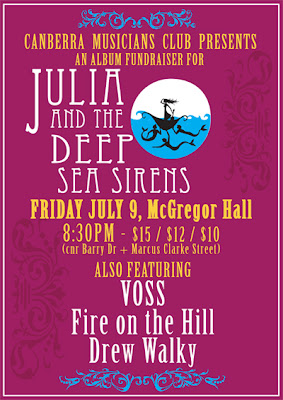 The Sirens have spent most of the past twelve months or so either in the studio or supporting interstate acts including Tim Rogers, Skipping Girl Vinegar, Kate Miller-Heidke – you might have heard them at Corinbank too.

Now it’s their turn to put on the party, and make cupcakes for it as well. On Friday July 9th they will throw their kitchen aprons aside and take to the stage to play their eclectic blend of folk, pop and alt-country.

Supported by the Canberra Musicians’ Club, this is one of the last gigs at McGregor Hall so come along to farewell this fine hall with a night of music, baked goods and mulled wine!

This band was great at Corinbank. Every time I drive past Lake George now, I think of the song she sang about it.