Justice Gallop remembered for dedicated service to the law and cricket 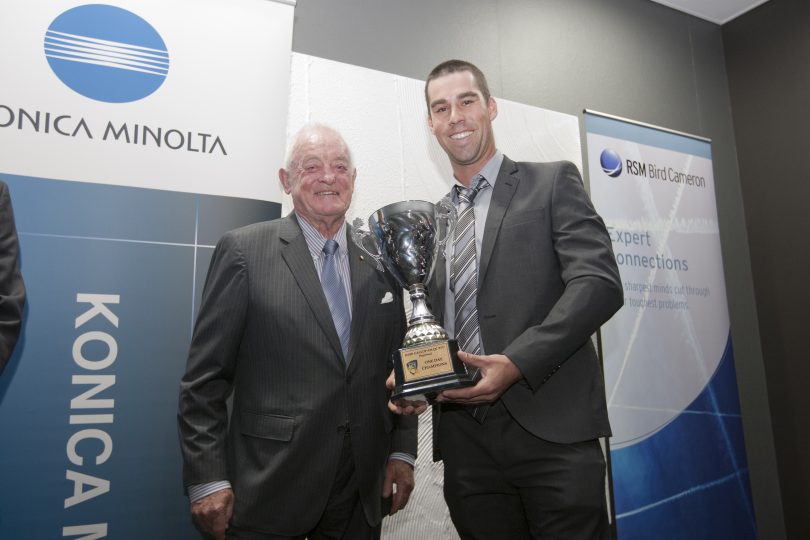 Justice Gallop AM QC RFD became a judge of the ACT Supreme Court in 1982 and retired in July 2000 on his 70th birthday. He also served as a judge of the Federal Court of Australia and a presidential member of the Administrative Appeals Tribunal.

Mr Ramsay said Justice Gallop made a significant contribution to the Canberra community in more than five decades in public life.

“Justice Gallop was one of the ACT Supreme Court’s longest-serving judges, committed to the law and ensuring that those appearing before him were treated fairly,” Mr Ramsay said.

“His direct nature in the courtroom earned him respect from the entire legal community and he will be remembered for his long and dedicated service to the profession.”

Before being appointed to his first judicial appointment – the Supreme Court of the Northern Territory – in 1978, Justice Gallop spent two years as the president of the ACT Law Society.

In 1998, he was appointed as a Member of the Order of Australia for his service to the law and the community.

A talented cricketer and long-time president of the ACT Cricket Association, Justice Gallop captained the ACT representative team from 1962 to 1966 and played for the Prime Minister’s XI against South Africa in 1964. In the match he struck the winning runs although, Sir Robert Menzies, the Prime Minister, was not impressed as he desired a tied result.

He was inducted into the ACT Sport Hall of Fame in 2002.

“On behalf of the ACT Government, I offer my condolences to Justice Gallop’s family, his friends and the legal community. Our thoughts are with you at all at this difficult time,” Mr Ramsay said.

“I was honoured today to attend a service to celebrate Justice Gallop’s life and to reflect on his significant achievements, both in the legal sector and wider Canberra community.

“I understand planning is under way for a ceremonial sitting of the ACT Supreme Court to recognise the contribution of Justice Gallop and I look forward to continuing to celebrate his many achievements.”

CricketACT said on its website that Justice Gallop was inducted as a Life Member of the Association in 2001/2002, and in 2007/2008 the board renamed the ACT First Grade One Day Competition the John Gallop Cup.

Long serving chairman Ian McNamee, who had a 35-year association with Justice Gallop, described him as a ‘great servant of the game’.

“From acquiring the management rights for Manuka Oval to ensuring the health of local clubs, John did more than anyone to progress cricket in the region. John’s leadership was recognised nationally and his speeches at PMXI matches were eagerly awaited and a feature of the match,” he said.

chewy14 - 18 minutes ago
Jorie, Why would I imagine such a thing when it isn't close to reality? As I've said above, the vast majority of people aren'... View
jorie1 - 1 hour ago
Assume there are 300 rental properties in Canberra. And 3000 people looking for a rental property in Canberra (these Canberra... View
Ophellia Knobbs - 2 hours ago
Banning short term/Airbnb in certain areas like Civic & surrounding suburbs would. View
Lifestyle 1

protea - 21 minutes ago
Sadly, the machinery shed can be one of the most dangerous parts of the farm - apart from the dam. View
Sport 17

Finagen_Freeman - 22 minutes ago
If we have to pay at the Hospitals then we sure as hell should pay at a sporting / recreational venue. Oh, we don’t pay at... View
purplevh - 44 minutes ago
Being a place that helps maintain a level of fitness in its users it's cost is most likely offset by the health benefits and... View
purplevh - 49 minutes ago
Paid parking out there? Can't the ACT government come up with better ways to raise revenue other than constantly slugging the... View
Opinion 267

Alan Vogt - 40 minutes ago
Rego for cyclists is a furphy. The link below shows the top five reasons. The vast majority of cyclists already pay rego (the... View
Valerie Merritt - 47 minutes ago
Alan Vogt we still pay fees for cars on roads, cyclists should at least be registered and pay something towards the network o... View
News 1

assiduous - 1 hour ago
It speaks volumes that the ACT government has set themselves up as a landlord here. Expensive housing is a problem largely of... View
Sport 1

Cricket ‘tragic’ Rohail the new property lawyer on the block

@the_riotact @The_RiotACT
#International air #travel will look very different when Australia’s #borders fully re-open after the pandemic-induced downturn. Here's what the future could look like https://t.co/BwWOBDRVJY (38 minutes ago)