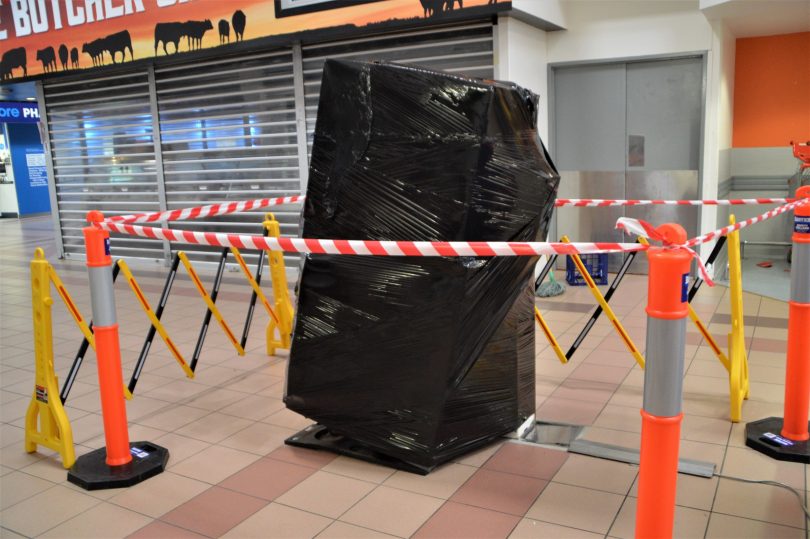 An attempt was made to steal this ATM inside the shopping centre when Kaleen Plaza was ram-raided. Photo: Glynis Quinlan.

Kaleen Plaza was ram-raided early yesterday morning with the offenders unsuccessfully trying to steal an automatic teller machine from inside the shopping centre.

The shopping centre entrance and the ATM were both damaged in the ram-raid with shoppers later forced to enter the centre through a makeshift opening and the ATM covered up and out of use.

Police are seeking witnesses to the ram-raid which occurred about 4.10 am yesterday (Saturday, February 10) at the shopping plaza in Georgina Crescent, Kaleen. 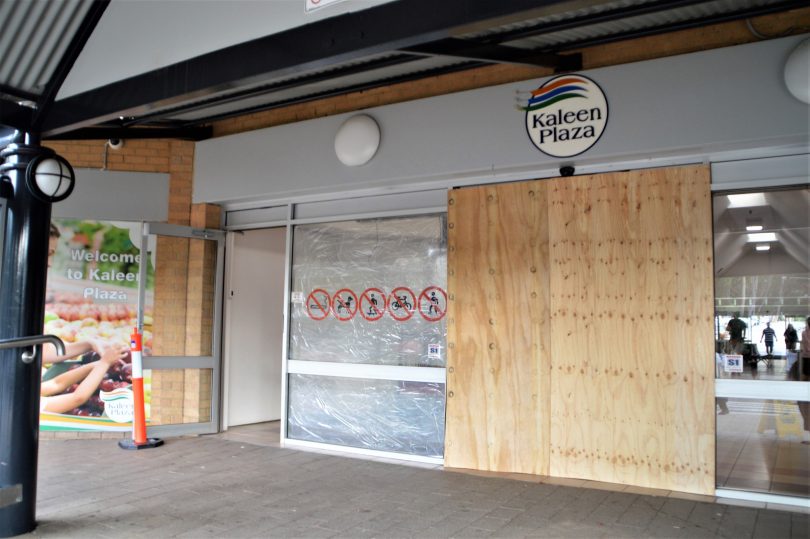 The entrance to Kaleen Plaza was damaged in the ram-raid. Photo: Glynis Quinlan.

ACT Policing said the ram-raid may be linked to an incident which occurred even earlier yesterday morning when an unsuccessful attempt was made by three males to break into a pay station at the Canberra Centre.

The incident occurred around 3.10 am yesterday and police report that significant damage was caused to the pay station, which was located inside the shopping centre carpark.

The maroon Commodore used to break into a pay station at the Canberra Centre. Image supplied by ACT Policing.

Police are urging anyone who has dash-cam footage of the maroon Commodore or information about either the Kaleen ram-raid or the offence at the Canberra Centre to contact them on 131 444 or contact Crime Stoppers on 1800 333 000 or via the Crime Stoppers ACT website.

Information can be provided anonymously but please quote reference number 6232345.

So they failed twice in one night?

I wonder if it’s linked to the successful ram-raid and robbery at Casey a few months back...were they ever caught?

Snap. I don't know if they caught them either.

Google doesn't show any news on this after 15 December when the police released the CCTV footage, so it looks like they didn't find them.

Elle Apopei - 54 minutes ago
This is a great idea! And I have seen examples of fenced playgrounds that still incorporate nature and beauty without feeling... View
Elle Apopei - 59 minutes ago
Rebecca Willis View
News 17

JS9 - 1 hour ago
While there is no doubt that the contracts are unfavourably placed at the moment, its not '3 times the current electricity pr... View
bj_ACT - 2 hours ago
Spot on Chewy. As has been pointed out by a few people over the last year. The ACT government has signed up fixed price 20 ye... View
phydeaux - 3 hours ago
...and remember to take a clear photograph of the meter readings, in case you need to submit a correction. View
News 1

chewy14 - 2 hours ago
Hmmm, I wonder how the government could remove "organised crime" from the equation of selling these drugs? It's almost like i... View
TheSilver - 3 hours ago
Don't really have an opinion on this - don't know enough - but the last two years have made me think the government's positio... View
franky22 - 4 hours ago
Kershaw is a bureaucrat & is saying things that will please his political masters. He did not provide any evidence to support... View
Public Sector 3

COVID-19 lockdowns forced many Canberrans to work from home over the last quarter and, being winter, the heaters were on...
*Results are based on activity within last 7 days

@the_riotact @The_RiotACT
There's nothing like having your #artwork featured on a reality TV show like @TheBlock to get tongues wagging in your #hometown https://t.co/11tdAFykJx (30 minutes ago)