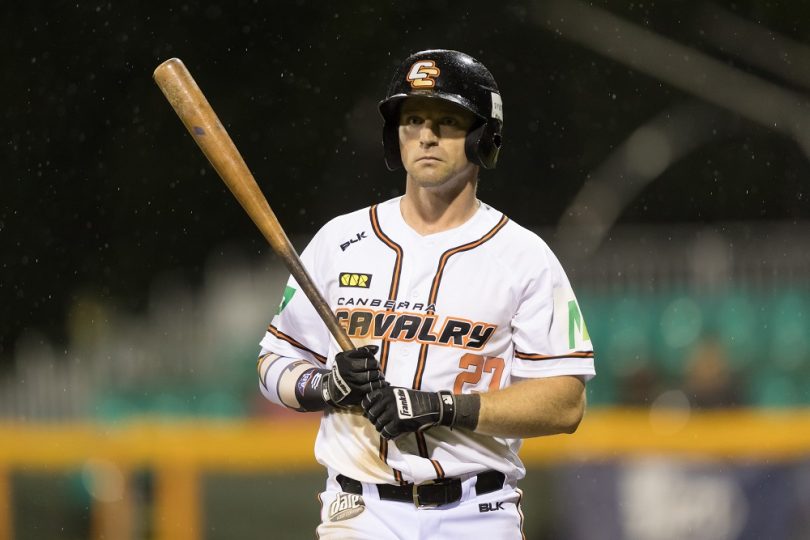 David Kandilas in action against his former side the Sydney Blue Sox round 2. Photo: Ben Southall | SMPIMAGES.COM / ABL Media.

Outfielder David Kandilas has been selected for the Australian team for the upcoming two-game exhibition series against Japan, with Baseball Australia announcing a 28 men squad to represent Australia in the crucial series to improve Australia’s chances of qualifying for the 2020 Olympic Games in Tokyo.

The ‘Kandi man’ was the leagues fourth best batter this season, averaging .380. The former Blue Sox star extended his contract with the Canberra side for an extra year.

Boss Moanaroa was also selected to play his first international match for Australia after the former New Zealand international played for the Diamondblacks due to his ancestry.

The Australian born Moanaroa was forced to switch allegiances to Australia to stop himself from being counted as an import in the Australian Baseball League.

The 26-year-old left-handed batsman and first-baseman will now wear the green and gold uniform in next month’s two-game exhibition series against Japan.

The Australian side will face Japan in Nagoya and Osaka on March 3 and 4 respectively and Mr Fish said the team was excited about the opportunity to face international competition.

“The team is excited about this international opportunity. The experience that this tour provides us as a squad is invaluable. We need to be able to piece this together as a squad as frequently as possible in order to be ready to qualify for the 2020 Olympics.”

Australia’s roster includes a blend of youth and experience, with a number of players making their international debut, and all 28 men seeing playing time in the ABL this season.

The coaching staff also contains six men who have managerial experience in the ABL.

Team Australia’s first destination of their 2018 Japan Tour is Fuchu City, with the two games on the tour to take place in Nagoya (March 3) and Osaka (March 4). Both of the games will be broadcast live on Fox Sports.