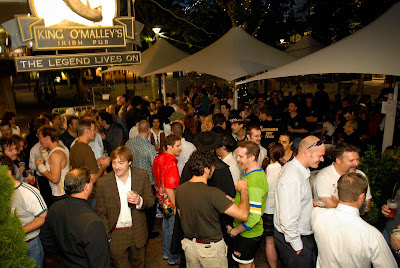 From covers, Irish folk to upbeat dance music on Saturday nights. It is a great place to visit and meet your friends. King O’Malley’s was just awarded the “BEST LIVE ENTERTAINMENT VENUE’ by the Australian Hotels Association. This follows the 104.7 Griffin Award 2010 for ‘CANBERRA’S Best Pub”

King O’Malley’s is a great supporter of local community Events and the “Canberra HQ for Movember”. It is the venue for the official Movember Gala Party each year. Managing director Peter Barclay would like to see as many Canberra businesses , organizations and just groups of friends to get behind Movember 2010 to make it the best ever. It’s easy to support and a lot of fun it doesn’t matter whether you are TransAct or just a group of mates …just form a team and register at www.movember.com and have some fun! By growing a mo for the month you can become a walking billboard for Men’s health including depression and prostate cancer.

King O’Malleys has become the place to meet in Canberra, by sticking closely to the time honoured formula of what it is people want from a pub.

It doesn’t have poker machines, the music is at a volume allowing conversation, you don’t have to sign up as a member to come inside, smokers can sit outside, non smokers can choose where they want to sit.

The bar is also celebrating its recent wins at the AHA Awards where it took out “Best Live Entertainment Venue”, while publican Peter Barclay was awarded “Member of the Year” for outstanding service to the industry, community and the Association by an individual.

Where other bars try and buy ambience in a kit from Dublin the decoration has grown organically and historically. In the case of the penny farthing hanging on the ceiling, it was rescued from the Dickson Tradies’ efforts to purge itself of all character.

Unusually in Canberra it’s not hidden in corner, it’s right out there on City Walk and at first glance it is obviously a pub.

In the very name King O’Malley’s sinks its roots into the community.

The knockabout American hellfire preacher King O’Malley was an icon of Australian Federation era politics. Canberra was only built in the location we know because King O’Malley fell in love with it and supported the site in the face of bitter criticism (you think it’s cold this winter just be glad we’re not in Deniliquin).

Even better for a pub he was a fierce opponent of alcohol and had campaigned in South Australia against attractive bar maids.

The pub celebrates this past with vignettes from O’Malley’s life on the walls, as well as a historic collection of portraits and photographs.

In more established cities history lives and breathes over centuries through this sort of thing and it’s great that it’s taking root in Canberra.

The ties to the community are more than just historic. King O’Malley’s invests heavily in supporting charity drives, putting many of the 25 staff through university, and in supporting local bands with over $1 million flowing to musicians over the last ten years.

When you want to meet a friend for a drink or a quick feed in Civic what’s the obvious choice?

Ah, the power of advertising.

You can see straight through me 😉

Ah, the power of advertising.

Gotta love upstairs behind the bar. Too bad smoking is banned in bars nationwide otherwise it’s a perfect setting for a cigar and nice 21 year old scotch, but still great for dinner and a quick read of the 1994 hansard. First place I went on my 18th a few years back, festive times 😀

(that is to say it’s not usually the sausagefest in the above pic, as far as I’m aware… )

Oh my god I’m in that photo. Might be the only girl in it… Movember a couple of years back

My personal choice is Fat Yak, Guinness, Peroni and then leave the rest up to the bar wench just to be polite.

What do you get on a beer paddle at King O’Malley’s?

Irene Kelly - 56 seconds ago
What happened? View
Tim Van Der Vlist - 4 hours ago
No discounts for the members for resigning is a disgrace. They have to play on a mediocre (at best) course for 6 months and s... View
Eamon MacDonnell - 6 hours ago
Rowan Kemp Mark Furry Andrew Thorne stills a ways off View
Opinion 125

Mark Katalinic - 23 minutes ago
When nobody enforces the road rules what do you expect? View
Dayne Dallinger - 52 minutes ago
Jethro Counsell have a good read mate View
Tiffany Roy - 54 minutes ago
David Brown let's not get angry at one another. To be fair, the congestion is not on 60km roads, and it normally onlytakes 2... View
News 17

tfx1 - 25 minutes ago
Why is it Canberra people do not understand risk analysis. Some simple numbers to demonstrate the effect of this big battery.... View
Capital Retro - 3 hours ago
Don't speculate on unknown unknowns. View
Property 32

John Moulis - 38 minutes ago
AstraZeneca is a dog and I got it straight from the horses mouth. I went for my first jab today and I told the nurse that I h... View
Community 2

nealg - 2 hours ago
Heavy truck traffic, lack of footpaths and e-scooters not a good mix for Mitchell. View
News 45

Motorists involved in collisions with vulnerable road users may face a specific charge and much stiffer penalties if convicted under...
Opinion 125

Not that long ago, my partner and I were part of the teeming masses of young people trying to get...
Property 32