Has anyone else noticed the slip lane leading north onto the Tuggeranong Parkway from Lady Denman Drive.

You have the situation where cars coming off Lady Denman to go to Belconnen have a Give Way sign when turning right. Across the road from them you have cars exiting the Arboretum which have a Stop sign when turning left or going straight. And to add to the confusion there is the slip lane from the Parkway to get onto Lady Denman Drive, which says you must turn right, but you see people driving straight through that point all the time. 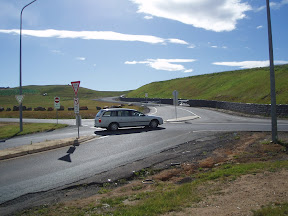 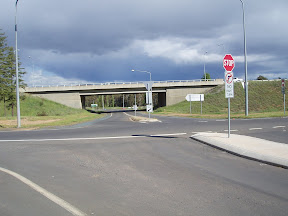 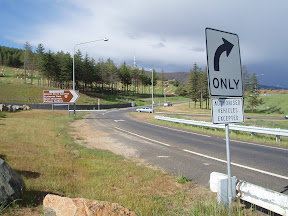 Spectra, my apologies, you are right. There is no give way sign on the slip lane. Think I suffered a brain fart when I typed my last comment.

TP3000 smartest thing I have ever heard you say! It would solve all the problems there and would actually improve traffic flow. Been stuck many a time at that point turning right onto William Hovell.

There is an easy fix to this:

For that small intersetcion construct a roundabout-as in the future more cars will access the tree place.

Spectra you are right, there is no give way sign on the exit ramp from the parkway (it isn’t a slip lane, they are different). There is a right turn only sign. Cars coming that way still have right of way over all other traffic, but have no right to go straight ahead, or turn left!

“My understanding is that the giveway sign on the slip lane…”

Wait, the what? That’s the first time anyone’s mentioned a Give Way sign there. I can’t see one in the photos, and the road markings on the map certainly don’t suggest that such a thing exists. Are you sure you know what you’re on about?

If such a thing existed, it would indeed confuse matters, particularly if there was also still a Give Way sign on the road coming from Lady Denman. I suspect, however, that it doesn’t.

My understanding is that the giveway sign on the slip lane was put in to stop people overtaking the west belconnen bound traffic on the parkway. People trying to save a extra 30 seconds on the trip home. Now they have to giveway to the traffic coming from Lady Denman. About time they put that in.

Have you ever seen roads in Italy? no lanes etc and they drive fine

remove all the signs.

Have you seen the roads in China?

Depending on the amount of traffic coming out of the Aboretum, they might put Temp traffic lights in as they do on Commonwealth Avenue for Floriade. It seems that the gates to the Aboretum wont be open to the public unless its a special event or open day.

Don’t you have to know this to get your licence?

The cars on the slip lane coming off the parkway have right of way and then it is like any intersection. Only takes some common sense and politeness.

close your eyes and hope for the best.

That’s what my wife does!

As has been noted above, it looks like a pretty simple 4-way intersection to me, the only “complications” being there’s no traffic arriving from the NE and that coming from the SW is only meant to turn right (for all that that rule is actually followed). Our road rules cover what you’re meant to do at an intersection pretty clearly, I thought. bd84 and JC have already covered what should happen – Cameron, if you’d be kind enough to stay off the road until you have brushed up on right of way rules that’d be great.

I’ve never had a problem there…

I’ve never gone anywhere but off the parkway, right and onto lady denman at that intersection

remove all the signs.

If so then it doesn’t matter if it is give way or stop. The difference between the two is the car facing the stop must bring their car to a complete stop before crossing the line.

So the order would be: Car coming down slip road from the Parkway. Ie is irrelivent that they must turn right, as they need to enter the intersection anyway to make the turn.

The last priority would be cars turning right across everything else from the giveway sign.

PS Good to see the slip road now has right turn only on it. It used to give me the irrits coming along the parkway in peak hour heading to Belco doing the right thing, only to find cars using the slip road as a bypass thus making it difficult to get off the parkway onto William Hovell drive to belco. If only those doing that stopped and thought for a second they would realise that their actions were half the problem in the first place.

Heh I’d say they’d stuffed up with the Stop sign from the Arboretum instead of a Give Way. Though it would make little difference, other than cars from the Aboretum being required to come to a complete stop, the usual give way rules would apply.

Parkway traffic can only legally turn right they do not have to give way to anybody.I’m guessing they will change the signage once the arboretum opens.

Anyone using the Parkway exit to jump straight back onto the Parkway is just circumventing traffic and is doing so illegally. I’d give way to them anyway.

Gregg Heldon - 28 minutes ago
Margaret Dudley I hope not but...... View
Stuart McKay - 45 minutes ago
Ian Bushnell has thrown the toys out of the cot again, sigh Brad Clarke View
Joseph Stubbs - 1 hour ago
Here's a look at what you get when you go to ACT Labors 2020 Election Policies page. Though, to be fair, elsewhere on their s... View
Property 46

Allan AJ - 49 minutes ago
Scott Lang you should of knuckled down early on and bought in your 20’s not try to start doing it in your 40’s. View
Jp Romano - 2 hours ago
Margaret Welsh you’re wrong. Shadow me your facts. View
Scott Lang - 4 hours ago
Allan AJ , perhaps you are right. But I'd be looking for something at half that price. Unlike the older generation, I have to... View
Opinion 19

Phạm Quới-Chi - 13 hours ago
We spotted not just one , but three black cockatoos in Isabella Plains 😍 View
David Ironside - 17 hours ago
Tracey Ironside yes there a few around Fadden recently View
Sandy Gibbs - 17 hours ago
Kathy Little Suzy Obsivac these are the ones we saw on our walk today. Timely article!... View
Opinion 1

O L - 22 hours ago
Great, that means little to no federal funding coming our way View
Annie Mills - 23 hours ago
Ben Winkler I have a sneaking suspicion that people in the bushfire affected areas are so desperate for the help they have be... View
show more show less
*Results are based on activity within last 7 days

@The_RiotACT @The_RiotACT
Work at Canberra Hospital? Canberra Health Services has lodged plans for a temporary 1100 space staff car park on the site of the former Woden CIT to service the hospital while it undergoes major infrastructure works over the next four years https://t.co/a1xcG1rZsO (19 minutes ago)