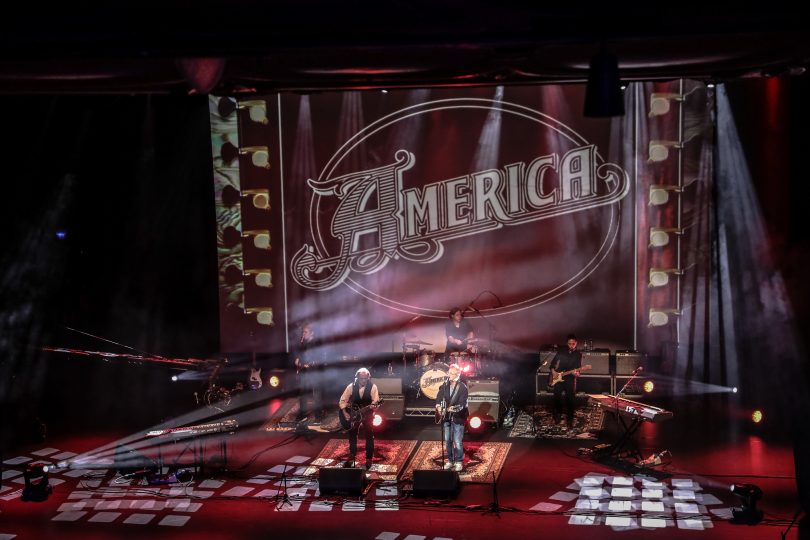 Fifty years is rather a long time to do anything. It’s no surprise then, that Gerry Beckley of 70s soft rock icons America has mixed feelings about seeing his band head out on a lap of the globe to celebrate the milestone.

“I remember talking about it with my dear friend Robert Lamm from the band Chicago when they went through their 50th anniversary,” recalls Beckley. “He said: ‘All I can tell you is: don’t mention it'”.

A couple of times he mentioned someone called ‘David’, who was clearly a close friend. It took me a minute to realise he meant David Crosby, from Crosby, Stills & Nash.

“My friend Brian” was ‘Brian’, as in ‘Wilson’. You know, the bloke from The Beach Boys.

America rose up the charts in the early 70s with ubiquitous songs like ‘A Horse With No Name’, ‘Ventura Highway’ and ‘Sister Golden Hair’, emerging smack bang in the middle of a musical golden age where recording technology was capable of producing more or less any sound an artist could imagine.

“Just to watch the technicians of the time, the engineers, adjust to the immense amount of change, it was like a car having 100 horsepower and suddenly getting used to cars that have 400 horsepower. It was a fascinating time creatively. To me, it was this pivotal moment that was Pet Sounds into Smile, Revolver into Rubber Soul.

“That would not have been anywhere near as powerful as it was if it was just technical improvements, but all of the creative elements were also improving. These guys who had basically played in clubs in Hamburg were now starting to write far more complex melodies and bridges and key changes and stuff.” 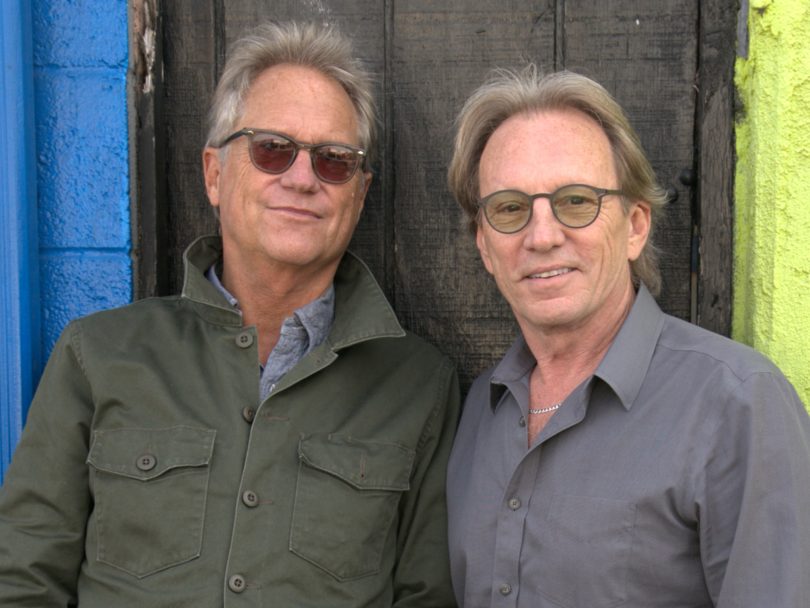 Gerry Beckley and Dewey Bunnell are celebrating 50 years as America.

Beckley, along with his bandmates Dewey Bunnell and Dan Peek, channelled the power of that technical revolution into their own voices, constructing immaculate harmonies that sound as fresh today as they did back in the 70s.

“It’s mostly tuned now,” says Beckley, observing the rise of pitch-correction in recent years. “My older son is a record producer. That’s one of his main gigs actually, working with vocalists and trying to get the best vocal performance.

“At the risk of giving too much of a ‘back in our day’, you had to sing it well. You didn’t have all of these helping hands. It irons it out, unfortunately. You can correct pitch on anything. It irons out a lot of the emotion. There’s a dynamic that I think is missing.”

But with every technical milestone in music comes new creative freedom, new chances for artists to endear or alienate their audiences. I can’t help but thinking that the clarity in those early recordings, the way the acoustic guitar on ‘A Horse With No Name’ sounds as though it’s actually right there inside the speaker, has in some way contributed to America’s cross-generational audience, one that remains entirely bankable to this day.

“We toured with The Beach Boys for most of the 70s and 80s, and the kids weren’t born when this stuff was out. And at the time we thought, ‘how amazing is that’. Lo and behold, 20 years later it’s the exact same thing. There were kids who hadn’t heard our music at all until they heard it in Grand Theft Auto, some video game or something. And we thought geez, the power of music.”

For every, frankly, surreal reference of his interactions with the very fabric of popular culture, Beckley would put forward a word like ‘treat’, or ‘pleasure’, taking nothing for granted in a five-decade-long career. The power of music indeed.

“It’s the gift of the audience, that’s the bargain. They bought your records in the millions. They put your kids through college, to put it bluntly, you know. Every night we get to go out and see these people. That’s our half of the deal, we go out and play this stuff. And you see their faces and oh boy, if that doesn’t do it for you then there’s something wrong.”

Martin Ross - 26 minutes ago
Us taxi drivers would love it to return View
Marko Potrebica - 54 minutes ago
What a fantastic idea. Congratulations to the organisers. Thanks you🏁🏁🏁🏁 View
Michelle Ayers - 8 hours ago
Yes please 🙏 View
Community 55

Brendo Collins - 2 hours ago
Maybe cause no one went to this actual facilty it is closing. Maybe if you attended it might still be open. View
Mookie Moo - 4 hours ago
This is so disappointing. I have not used this facility, but I have done weekly aqua aerobics as my main form of physical fit... View
Anne Maree Crowe - 6 hours ago
I feel for these people who have lost their water aerobics classes. Many elderly and people with mobility issues rely on swim... View
Property 16

Margaret Harries - 6 hours ago
What a fantastic house and property, I love it,wonder what’s the price their asking for it View
News 18

Jo Hann - 7 hours ago
Jason Todd how many teachers are refusing to vaccinate? From what I've heard, they're one of the most vaccinated workforces..... View
Jo Hann - 7 hours ago
Bazwah Gib last I checked, Craig Kelly and his ilk hated The Greens more than any. And it's been his propaganda that is fuell... View
Jo Hann - 8 hours ago
Bazwah Gib I'm finding it's the right wing Murdoch media readers who are the most vax resistant. View
News 12

JC - 9 hours ago
Cool story. Except that isn’t what has happened. No where near that much has BEEN spent on lightrail nor has what has been... View
nadine - 10 hours ago
Exactly, when our population was around 250k we had 3 hospitals. Our population as almost doubled but we only have 2 public h... View
News 23

Kay Pearce - 10 hours ago
Mrs Prowse was my grandmother and I can well believe she would walk to Manuka… well into her seventies and early eighties s... View
show more show less
*Results are based on activity within last 7 days