Leo helps Rotary kick off its centenary year in style 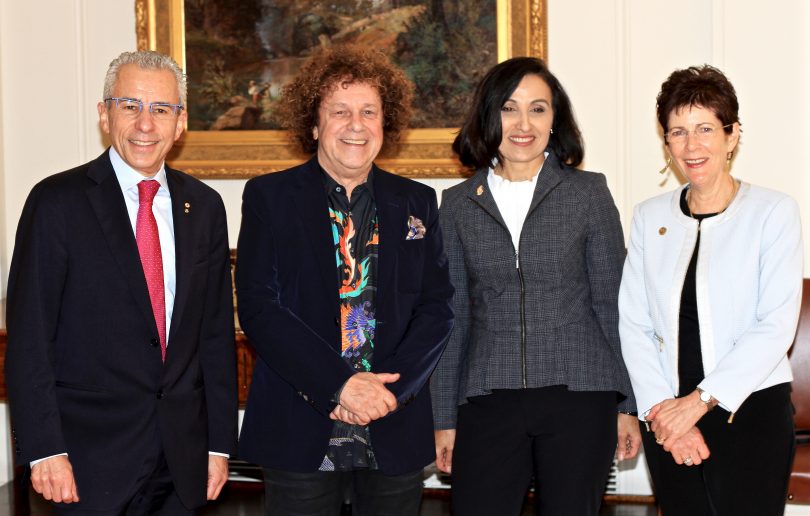 Legendary performer Leo Sayer knows he can still dance. And he proved it at the launch of Rotary’s centenary year celebrations at Government House on Friday.

A live-stream of the launch included musical performances by Sayer, Phantom of the Opera lead Josh Piterman and young tenor Nicholas Jones, who has recently been acclaimed for his portrayal of David in Die Meistersinger von Nürnberg for Opera Australia.

The artists have largely laid idle since the COVID-19 outbreak, but they were more than happy to perform at Government House before Rotary ambassadors Governor-General David Hurley and Her Excellency Mrs Linda Hurley, who officially launched Rotary’s centenary year.

The event was also live-streamed via Zoom to 30,000 Rotary members and the public wanting to join in the celebrations.

The socially distanced contingent at Government House saw the chair of the National Centenary of Rotary committee, Garry Browne, and president of the Rotary Club of Sydney Fatima Ali pass the Rotary baton that will travel from one Rotary club to another around Australia for the next 12 months.

During the one-hour ceremony, Mrs Hurley passed a virtual baton via video link to Jessie Harman of Rotary International in Melbourne. 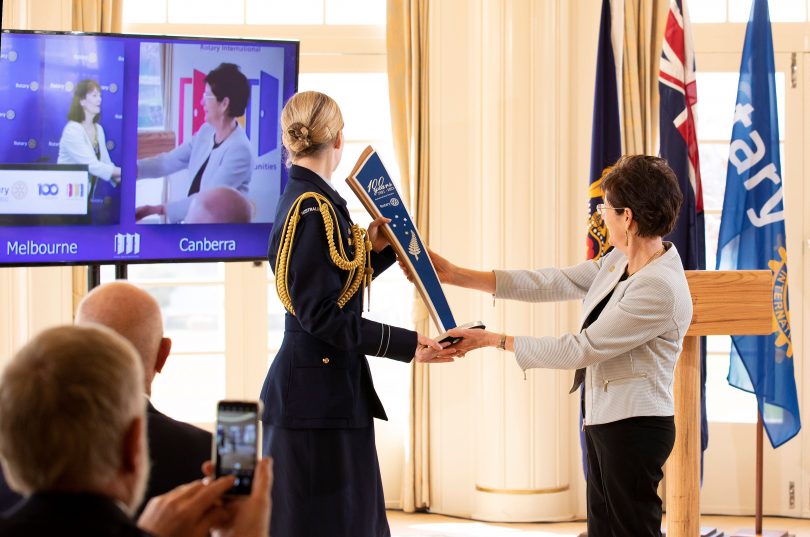 “Rotarians live and breathe community. They are dependable, they are selfless, and they want to make the world a better place,” the Governor-General David Hurley said during the ceremony.

“This centenary year will be an exciting time for all Rotarians and an ideal opportunity for all clubs to commit to a centenary project.”

To celebrate 100 years of Rotary, the organisation is looking to the future, with many new projects that deliver long-term solutions to the world’s most persistent issues.

Two major projects were also launched at the centenary event. The first is to end trachoma, the leading preventable cause of blindness worldwide. The second, called Give Every Child A Future, is with the support of UNICEF to provide life-saving vaccines to 100,000 children across nine Pacific nations.

“Australia is the world’s only developed country with trachoma, an infectious eye disease that can be prevented with good hygiene practices. Rotary wants a trachoma-free Australia by 2021,” chair of the National Centenary of Rotary Committee Garry Browne said.

The Give Every Child A Future project will give life-saving vaccines to 100,000 children across the Pacific and ensure generations of children and women are protected against cervical cancer, rotavirus and pneumococcal disease.

The Governor-General said Rotary brings a global network of volunteer leaders who are dedicated to tackling the world’s most pressing humanitarian challenges.

“All around the country, Rotary has been on the ground in our communities, supporting Australians in need,” Mr Hurley said.

“Linda and I have visited many of these communities. We have seen first-hand the positive difference that Rotary makes to people’s lives.

“Yes, there is much uncertainty at the moment. The pandemic is not going away soon and our lives will continue to be disrupted on many fronts. Recovery will take time.

“But what I do know is there will be many potential projects worthy of consideration by Rotary in a post-COVID-19 world.”

Rotary brings together a global network of volunteer leaders dedicated to tackling the world’s most pressing humanitarian challenges. Rotary connects 1.2 million members of more than 35,000 Rotary clubs in more than 200 countries and geographical areas. Their work improves lives at both the local and international levels, from helping those in need in their own communities to working toward a polio-free world. 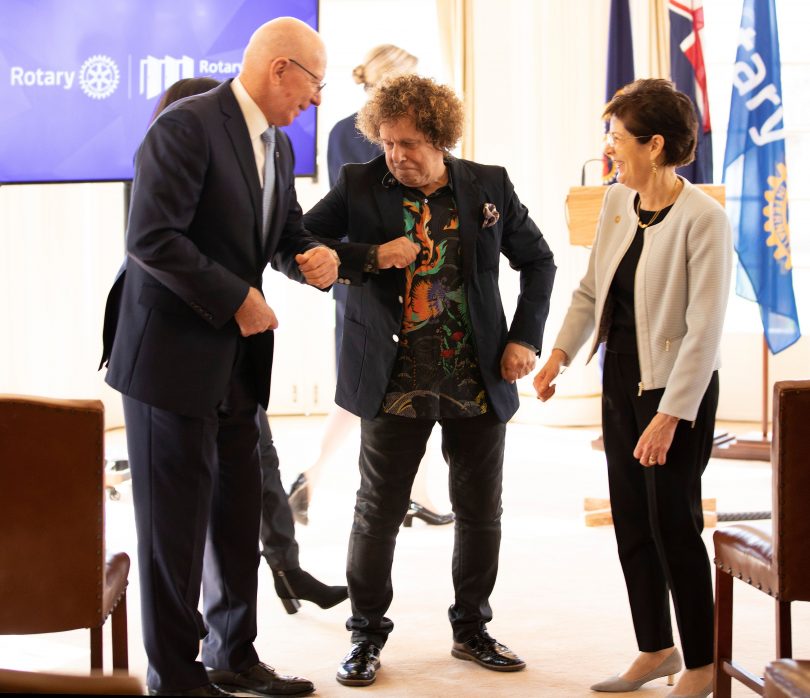 MERC600 - 22 minutes ago
Have had my first shot of Astra. Had some Panadol the next day due to a bit of a headache. But am unsure if headache due to A... View
Ol L - 3 hours ago
Good friend passed out the evening after after the AstraZeneca shot, hit her head and had 10 stitches. Not a blood clot so no... View
nothappyjan - 5 hours ago
Had pretty much the exact same side effects as you, suppose it shows it is actually doing something for my immune system. Wil... View
Breaking 1

Ol L - 1 hour ago
Canberra. If the traffic gets bad just put in more traffic lights, that’ll work real good…..check out Hindmarsh Drive Phi... View
Deepak Ramanath - 2 hours ago
James Forge Wow, where is this? View
James Forge - 2 hours ago
Deepak Ramanath the government is about to demolish an overpass and replace it with yet another set of traffic lights View
Opinion 188

Jenny Graves - 1 hour ago
Kit Oates those people who get impatient, in my experience, tend to tailgate. If you don't, then that's great and I apologise... View
Francesco Merlino - 2 hours ago
Alex Dee Alex Dee I hope you are right! View
circe64 - 4 hours ago
There is a road going into Gungahlin where 90% of drivers clearly show they don't read road signs. They drive 60 in a clearly... View
event 1

cats2dog1 - 4 hours ago
Batteries – with lithium ion or lead acid will be the new asbestos problem In 10 years. Salt-water batteries less of a prob... View
chewy14 - 7 hours ago
Capital Retro, That's the point though, you didn't even need "spare cash", the offer was so good that it made financial sense... View
Property 34

Fran Corby-Moore - 6 hours ago
I'd like to know how many people registered lots of family members (like young children or relatives/friends outside Canberra... View
News 14

Alicia Conley - 7 hours ago
Overcrowded, understaffed and no funding in sight. Still housing women inmates in the men's cells?? Have you fixed that probl... View
News 5

omrited - 8 hours ago
When excellent teachers retire and their expertise is not in anyway tapped by the department, their knowledge , resources and... View
show more show less
*Results are based on activity within last 7 days

@The_RiotACT @The_RiotACT
Canberrans have been warned against travel to metropolitan Sydney and ACT borders have been effectively closed to Sydney residents. Here's how the ACT is responding to the growing Sydney COVID-19 outbreak https://t.co/ftCMKm59mv (25 minutes ago)

@The_RiotACT @The_RiotACT
Get fired up because we've found three of the best #KoreanBBQ restaurants for your next Korean feast in Canberra https://t.co/BQvwi7Rum1 (4 hours ago)