Life, Death and Magic at the National Gallery 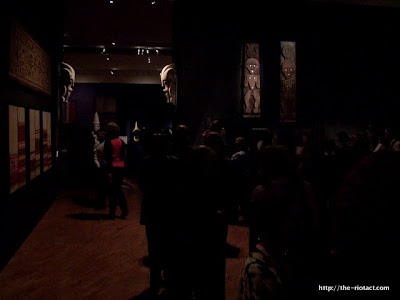 Tomorrow the National Gallery has a very different exhibition opening.

In the words of Gallery Director Ron Radford “It’s a little bit creepy”.

It’s also striking, thought provoking, and inspiring. This from the website:

For thousands of years across mainland and island Southeast Asia the deification of significant ancestors and the veneration of spirits of nature have formed the basis of traditional beliefs. It has also been the impetus for the creation of splendid and extraordinary works of art in fibre, stone, metal, wood and clay—made to protect and give pleasure to the living, to honour the ancestors and to secure safe passage for the human soul between this world and the afterlife.

Covering 2,000 years and spanning thousands of kilometres it’s worth taking notes for further research. (Who were the Dong Son of Vietnam with their bronze work?, What were the Nias people of Indonesia doing with all that magnificent gold work? The Dian of China with their 3rd century BC decorated bronze daggers? The Ifugao of the Phillipines as recently as the 19th century)

The exhibit is a whirlwind journey exploring a belief system that predates what we think of now as religion.

Aside from the artistic and spiritual concerns (which as one would expect in an art gallery are the focus of the exhibition) there are some amazing out and out treasures on display.

Special mention needs to be made of the curation. The lighting to set off the shadows cast by some of the objects certainly adds to the creepiness, but also highlights the amazing shapes.

Well worth checking out.

UPDATE: We’ve got three double passes to this exhibition available to Premium Members. Free to the first three to email tim@the-riotact.com

Linda Gregory - 10 minutes ago
who came up with this 6months theory???how do we kn how long if we only found out abt it not so long ago,???... View
Melissa Wareing - 6 hours ago
Adrian Wareing... 3 months 😞 View
Teresa Baxter - 8 hours ago
Tia Baxter guess you’ll be having a 22nd. Might be a new trend. View
Opinion 16

Bill Gemmell - 38 minutes ago
Could be a chance to develop some sustainable homeless shelters, food forests in most suburbs and fix the tree canopy. Other... View
Rodney Broughton - 1 hour ago
Build that bike/ walking path from quangers to cooma on the old rail line. People would line up for the work. View
Amanda Evans - 1 hour ago
Plant trees and yes.. fix the bike paths. View
News 11

Andrea Kerr - 2 hours ago
Angela Moore does it matter really. Use whatever spaces they can to try and save lives. View
Daniel Howell - 3 hours ago
Where are they going to put it View
Dragica Ivanovic - 6 hours ago
Yup for 5G victims. View
Community 15

me heretoday - 8 hours ago
Is anyone else enjoying this wet weather as much as I am. View
Community 5

Jane Rosewarne - 11 hours ago
Exactly why other people are now struggling to obtain the basics. Some people have way more than they need, while others are... View
Karen Burt - 13 hours ago
How on earth can anyone’s cupboard be bare The excessive shopping people have been consuming is outrageous View
Bianca Rossetti - 14 hours ago
Shan Tel maybe they can help with baby wipes and nappies!! View
News 7

Ann Parker - 12 hours ago
Why prop up the casino View
Conrado Pengilley - 13 hours ago
Lets see how your water works on people's deferred bills then when the rubber hits the road down the track old chap. View
News 6

UPDATED March 29, 10 pm: Prime Minister Scott Morrison has announced a suite of new measures in response to the...
News 28

Chief Minister Andrew Barr has labelled anybody considering heading to the South Coast as ''extraordinarily selfish'' in the current health...
News 28

The coronavirus public health emergency has forced the ACT Government to call off Canberra's premier tourism event, Floriade, despite it...
News 28

@The_RiotACT @The_RiotACT
Crouch, bind, set: @TimGavel writes that the #Brumbies family is rising up to tackle its biggest challenge yet https://t.co/nycu9roKJT (2 hours ago)

@The_RiotACT @The_RiotACT
With hundreds visiting Tidbinbilla over the weekend, ACT Gov has been forced to close the nature reserve in line with social distancing measures https://t.co/jj8mtLpB30 (12 hours ago)

@The_RiotACT @The_RiotACT
Nine things to keep you engaged & entertained while you're isolating at home this weekend https://t.co/fhvgVy4ZHS (14 hours ago)