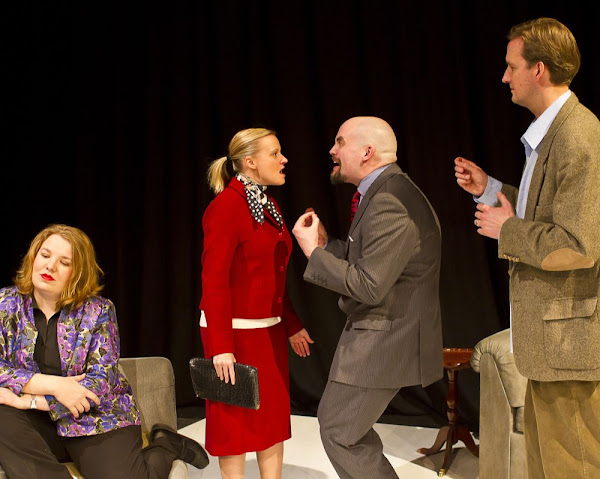 Canberra Rep has sent this in for your edification:

Yasmina Reza’s Life x 3, directed by Garry Fry, opens on 5 August and continues until 20 August at Theatre 3, 3 Repertory Lane Acton.
Reza’s insightful script explores how chance, with its impact upon our actions and behaviour, changes everything.

You are invited—from three different perspectives—into the lives of four characters, thrown into a social situation for which they
are completely unprepared, in more ways than one!

The talented cast for this Rep production are Megan Skillicorn (Sonia), Peter Holland (Henri), Debbie Newboult (Ines),
Sam Hannan-Morrow (Hubert), and the voice of Michael Spong (the son). Be with them as they interact, explore and grow.
Through chaos, and farce, see how the slightest random event can effortlessly derail the most elaborately laid plan.

A dark comedy on vanity, professional insecurity and the vicissitudes of marriage.

Ricky Gill - 24 minutes ago
Beth Stevenson is that U? View
Paul Leins - 53 minutes ago
Rheyce Spears Neither party has any interest in solving the problem. Ideologically, the current state of the housing market i... View
Paul Leins - 55 minutes ago
Sadly this is the story all around this region. Prices keep going up up up and the government has abdicated any responsibilit... View
News 3

Ross Jet Mccabe - 2 hours ago
Paul Monger That was probably the only good thing that they have introduced. View
Jackie Hattingh - 2 hours ago
On the other hand they trample and destroy habitat, causing erosion and water run off - drier = fires View
Dot Willcoxson - 3 hours ago
Di Hunter and the rubbish they leave behind. View
Food & Wine 113

Jeffrey Brown - 4 hours ago
Ahhhh those were the days. Standing in the queue and watching the odd brawl of dudes trying to prove their worth. Was normal... View
Lifestyle 8

Brian Myerson - 8 hours ago
Your article does not mention that every person in Canberra should be extremely proud that almost every year they achieve one... View
Property 17

Shane Westmore - 8 hours ago
parking outside Woolies is all 2-hour paid, it's guaranteed this'll be the same... Coles will love turning that area into a m... View
show more show less
*Results are based on activity within last 7 days

Anyone who was finding their way as a young adult in Canberra in the mid-1990s knows that a night out...
News 26

New car sales have been slumping across Australia for the past couple of years. But even so, and despite predictions...

@The_RiotACT @The_RiotACT
The Gungahlin Community Council hopes a new study results in community and recreational facilities that meet the needs of the fast-growing region https://t.co/uLNyehoql1 (15 minutes ago)