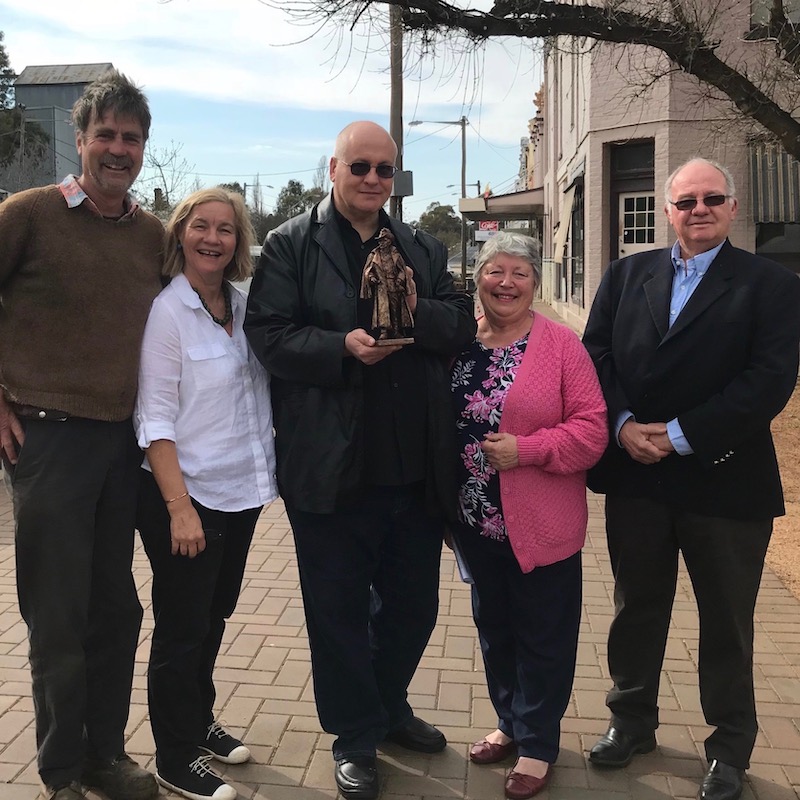 The Australian Light Horse founder James Alexander Kenneth Mackay will be celebrated like never before with the unveiling of a statue in Harden-Murrumburrah next month.

As well as mustering a cavalry of 80 men at Murrumburrah, Mackay fought the squattocracy, British military command and campaigned for a fairer society.

His great-grandson, Harden farmer Michael Baldry, says by creating the first Australian Light Horse unit, Mackay had found an expression of self-determination and military independence, being part of the creation of a burgeoning Australian identity, in a soon to be federated nation.

Michael is more than happy that historians are digging into Mackay’s affairs, which sat gathering dust for decades in family archives at Wallendbeen, a rural settlement between Harden and Cootamundra.

“He actually had a fractious relationship with his father (Alexander). His father didn’t trust him, effectively. He was the son of a squatter, but actually his early political career was breaking away from that restrictive idea of land ownership and trying to get more people on the land, and was more interested in the welfare of the larger community,” Michael says.

“His natural learning expressed itself later in life when he initiated forming the Army Reserves and better repatriation measures.

The family has sold the archives, which include correspondence between Mackay and Rudyard Kipling and other prominent international figures, to the National Library of Australia.

At least two literary historians are sifting through his prolific writing and are keen to write a book. For the best part of a century, Mackay was a forgotten figure across the district.

When Lorraine Brown returned from Sydney to her home town of Harden-Murrumburrah in 1996 she started a tedious search with Susan Bradford through old newspapers, the Murrumburrah Signal and Yass Tribune.

“We were looking for something unique to our town, other than railway, rural and that sort of thing which a lot of country towns have as their beginnings in that era of gold,” Lorraine recalls.

When they stumbled across Kenneth Mackay’s 1897 muster of the first Australian cavalry in Murrumburrah, it was precisely the nugget they had hoped for. But it was bigger than they realised. 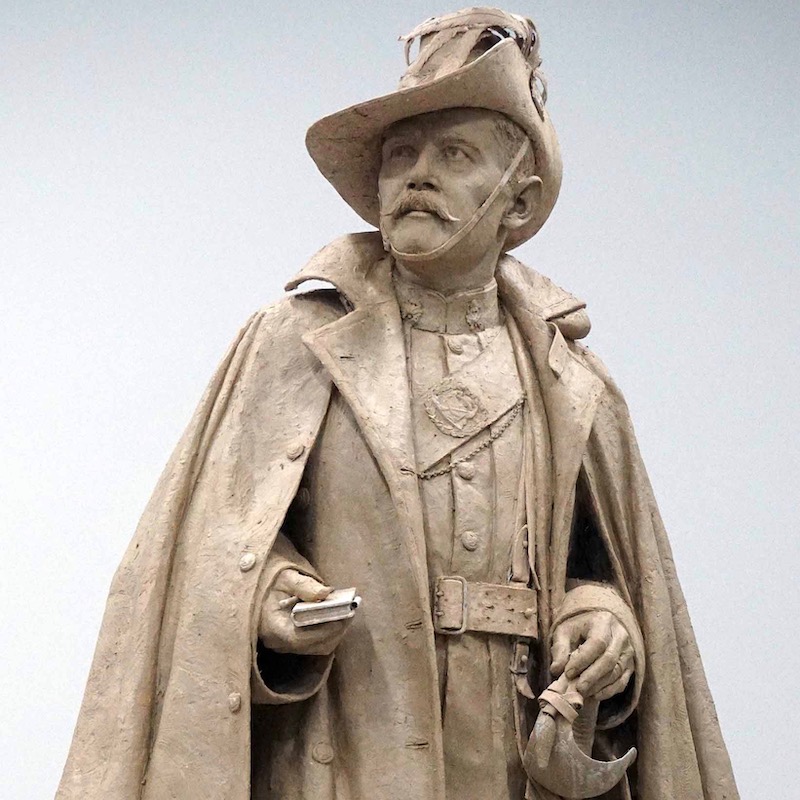 They set in train a centenary event for the following year. In 1997 their street stall for the centenary finished with a $5000 profit, which became the foundation for a more permanent memorial.

“I spoke to a lot of old light horsemen, there were still World War I veterans alive in those days,” Lorraine says. “Talking to them, they felt they had been pushed aside and forgotten.”

In Victoria’s Fundere Fine Arts Foundry, Melbourne sculptor Louis Laumen stares intently at the deep folds within the great coat of Mackay, doing his utmost to see that those old men will never again be overlooked.

Laumen is a prolific artist. He completed the courageous indigenous AFL star Nicky Winmar in September last year, which was unveiled in Perth only recently. He worked for four years completing the four riflemen for the Boer War Memorial on Anzac Parade, Canberra. He has researched Mackay, reading and talking to his family to get a sense of his character and personality. 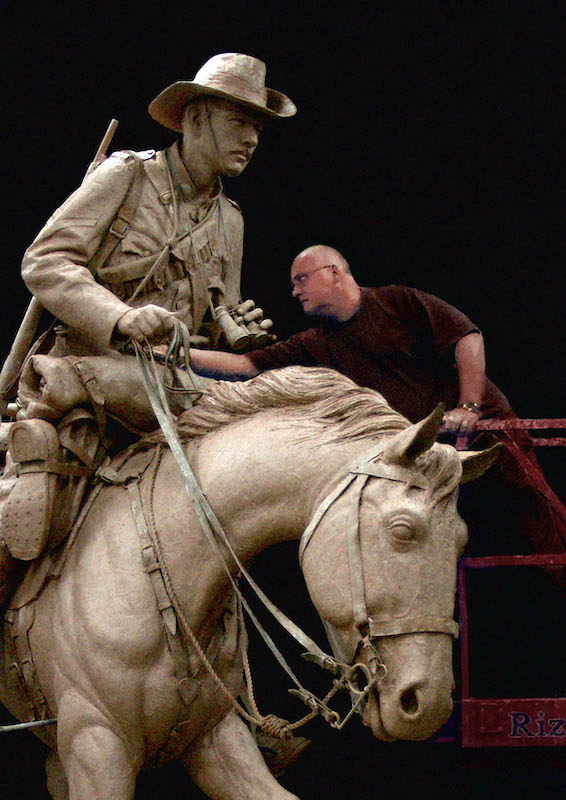 Born near Murrumburrah at Wallendbeen in 1859, Mackay was in the midst of his political career as the member for Boorowa when he promoted the idea of a light horse militia, a blueprint for a mounted Australian militia, including a uniform, slouch hats and the motto: “For Hearths and Homes”. The initial troop would be known as the “1stAustralian Horse”.

Mackay served in the Boer War commanding the NSW 6th Imperial Bushman contingent, was wounded leading a mounted charge and subsequently recorded many achievements. He retired a Major General in 1920 and was honoured with the Order of the British Empire that same year.

“I zeroed in on one historical image of him, which I thought really caught some of those aspects of his character,” Laumen says.

When completed and unveiled on August 31 in Murrumburrah, Mackay will look as if he has stepped on to a granite boulder to take in the vistas to the horizon.

“I’m in the foundry doing various touch-ups and details,” Laumen says. “This one was particularly complex in the folds of the clothing, the drapery, are very deep. The figure of Mackay wears a great coat and rain cape, with very deep, cavernous areas, almost beyond my reach with my hand.”

Alexander Mackay’s great, great, grand-daughter Annie Jacobs says the family formed the Mackay Association three years ago. They felt it was important to reflect on the contribution of Alexander, his sons Kenneth and Donald.

The Harden Murrumburrah Historical Society and Mackay Association applied successfully for a grant under the Stronger Community Fund to build a sculpture recognising Mackay’s contribution. To the $140,000 grant, the Mackay family added $10,000.

The statue will stand in a precinct devoted to the Light Horse and men who rode them into immortality.

Kenneth Mackay’s statue will be unveiled at 11am on August 31 in Murrumburrah. Visitors are welcome for the event, which will be attended by a Light Horse Association mounted troop.

Thank you John and the RiotAct. You have captured the essence of the life of J.A. Kenneth Mackay with colour and accuracy. Great journalism.

Ashley Wright - 4 minutes ago
Josh Shirley and when did you buy this property and how much equity did you have when you brought? View
Ashley Wright - 8 minutes ago
Candace Driscoll they never make more than market value of the property. Whilst rent is based on a percentage of income of al... View
Josh Shirley - 4 hours ago
I had a 3 bedroom 2 bathroom townhouse in Melbourne 30mins from the city and the mortgage was $200 a week cheaper than any re... View
Lifestyle 18