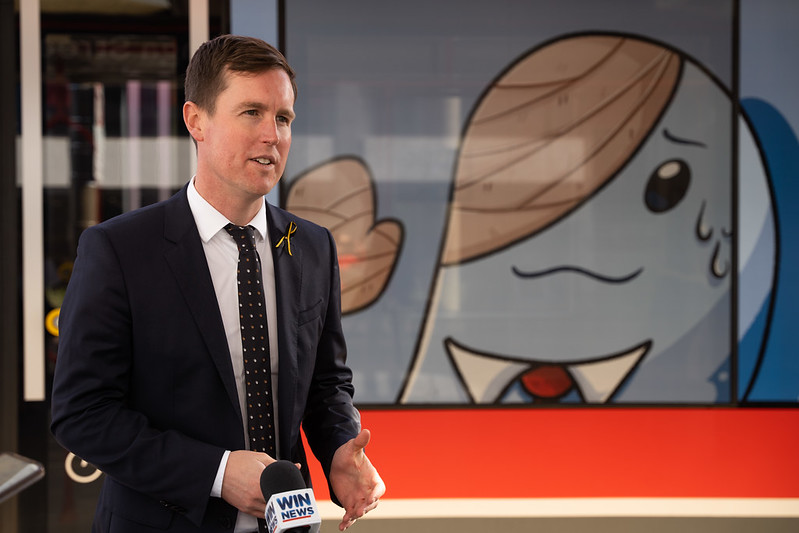 As the light rail expansion picks up pace, Canberrans are once again being urged to be safe around the “six-tonne rhinoceroses on skateboards that can’t stop”.

It follows the government releasing its latest ‘near miss’ video featuring people of all ages – pedestrians, e-scooter riders and motorists – getting dangerously close to the light rail, frequently because they are using their mobile phone or have headphones in.

It’s the latest of many campaigns rolled out to raise awareness about rail safety in the Territory.

In August 2020, a training exercise at Gungahlin Interchange – also designed to highlight the dangers of light rail vehicles to pedestrians – involved a mannequin ‘trapped’ under a light-rail vehicle before emergency service workers sprung into action.

But unfortunately, the message doesn’t seem to be hitting home. 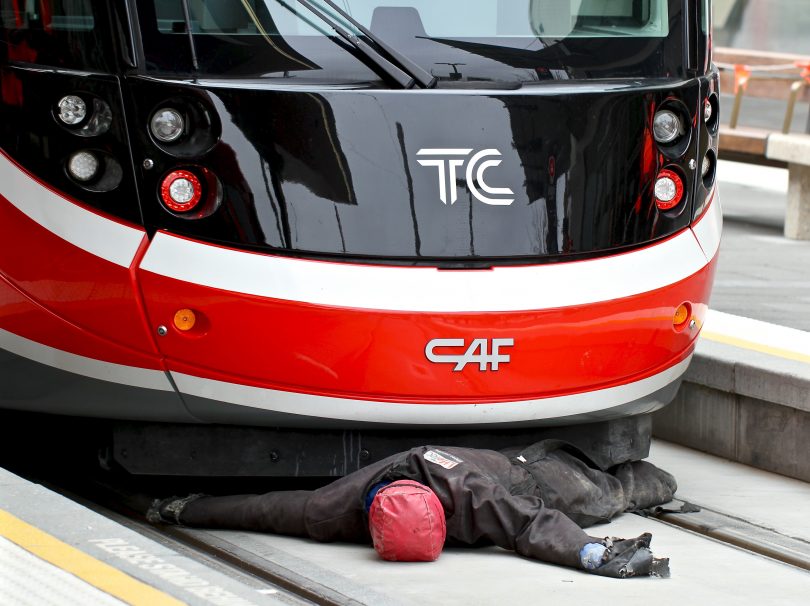 A mannequin lies trapped under a light-rail vehicle during the exercise at Gungahlin in August 2020. Photos: Michael Weaver.

There have been four collisions since the light rail became operational. Two involved motorists and two involved pedestrians.

Fifty near misses have been reported by light rail drivers since the beginning of the year, with 43 needing the use of emergency brakes to avoid a collision.

This Rail Safety Week, Minister for Transport and City Services Chris Steel has called on commuters to pay attention and take personal responsibility for their safety.

“This means looking up and standing back behind the yellow line on light rail platforms,” he said.

Mr Steel said Canberrans are getting used to light rail but there were still problems, especially around U-turns. 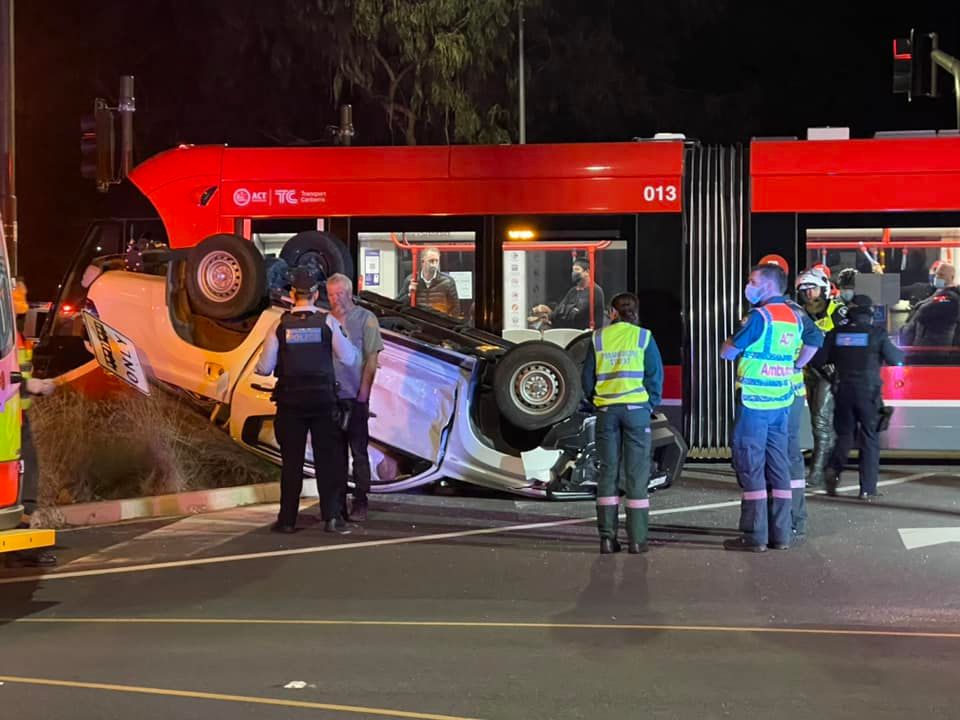 As part of the safety awareness week, local graphic design students have had their safety-related designs featured on light rail vehicles.

The four finalists are Dickson College students Teagan Wood, Ricky Bray and Lachlan Gibb, and Emma Morris from Gungahlin College. Commuters will be able to vote for their favourite design by scanning the QR codes on the posters at light rail stops.

The Commonwealth Government this week signalled its intention to continue to help fund the project as it crosses the lake and arrives in Woden.

Five new light rail vehicles will be added to the fleet from 2024 onwards so the trams can be retrofitted with batteries that will allow them to travel wire-free across the bridge and through the Parliamentary Triangle.

Preparatory works are already underway to upgrade the interchange at the other end.

Years of traffic-related disruptions are expected as the light rail project continues.

We should have had separated rail system.
The act system isn’t light rail its a tram its not separated.
The tram stops at tram stops rather than train stations, our trams also share the space with cars, hence the accidents.

The ACT government was approached to put something like this in from Bungendore to Kingston using DMUs and using existing light rail track right into the city in the future. It could have taken thousands of cars a day off the Kings Highway but they weren’t interested.

They expect everyone to buy an apartment.

Yes CR, that’s King’s Highway is a shocker – should be called a goat track. Was driving from Bungendore to Quangers yesterday and some fool in a BMW was driving at 60kph with hazard lights on. Obviously in limp mode

Why are we surprised? Trams in Melbourne hit cars about once a day.

It’s fortunate that they are as slow as a wet week otherwise they would have maimed a few people by now. Hopefully they will be able to control the rabbits around Vernon Circle when they start running towards LBG.

Given that we have had 43 cases where the emergency brakes have been activated, you’d have to wonder why the Government didn’t install flashing lights “announcing” the imminent arrival of the silent train, or something equivalent,
rather than relying on “personal responsibility”.

Here we are again, with the Government warning us that their LR is dangerous, but it’s still; “personal responsibility”.

You would have to wonder where the Territory could have a potential liability issue, in the event of a fatality.

You mean, like those red and green lights thingies? The ones that tell you when it is save to cross the tracks, or not?

Brisal,
Seeing as the government changed the speed limit in the entire city area to 40km/hr, despite the existence of those red and green light thingies, seems they don’t have much confidence in pedestrians ability to see them.

How many bus accidents over the same period??

That’s comparing apples and oranges. LR doesn’t travel on the same roads as everyone else. It doesn’t pull in and out of traffic at stops, go around roundabouts etc.

To be fair we should look at the number of bus accidents of a similar nature.
Can someone please provide those figures? Because I for one don’t want an unsafe transport system especially considering that the trams are so expensive. Electric buses would do the same job and we don’t have to invest in a new commonwealth bridge and have to endure a lot of transport congestion for the next 15 years. Molonglo Valley residents are still waiting for a bridge over the Molonglo River to replace Coppins Crossing’s but its construction does not appear in the current budget it has been Promised for years but never delivered. However the Greens want more 20% of the ACT budget for active travel. Given that and using another 20%+ for debt servicing, expect all other necessities to be neglected too.

No, you can’t compare statistics of buses and trams because the former were sharing the roads with motor vehicles, bikes and pedestrians whereas trams have (apart from intersections) exclusive corridors for themselves.

Strongly agree, CR, if you meant what I hope you did.

Busses travel on 2 and 3 lane roads with mixed traffic. People naturally take care with that, and rarely cross major (80+) roads and parkways away from unmarked locations.
LR is a narrow dedicated corridor, apparently easy to cross anywhere (with earbuds in, staring at your phone, of course).

Current busses make a racket.
LR is quiet (as are EVs of course).

Busses do 50 or less on suburban roads, more comparable with dedicated tracks.
LR cruises at 70. I think that motorists also underestimate that.

LR has no brakes, more or less, to which people (on anything from foot to car) are unaccustomed.

If we were to collect comparative data (difficult, on the above), then should it be per day? Journey? Passenger? Passenger-kilometre? Intersections traversed? Crossing activity by potential victims at unmarked and non-signalled locations?

Attempts to say we should compare raw event data are simply a rush to support prior beliefs, not thought.

Prior beliefs are the outcome of prior facts, not future dreaming.

Relevance, CR? As kenbehrens also points out, you need a common basis for comparison of data. The future is not under immediate discussion.

Tram drivers who take out e-scooters should be awarded frequent flyer points.