She’s coming to town as a guest of Monster Fest, a 12 hour horror movie festival at CIT’s Woden Campus that runs from from 3pm on Saturday the 30th of November right through to 3am the next day.

It also includes a special anniversary screening of the Exorcist at Greater Union, Manuka on the 23rd.

MONSTER FEST and WARNER BROS. present Linda Blair and
the 40th Anniversary screening of THE EXORCIST.

?It’s been called the scariest movie ever made and was the first horror film to be nominated for Best Picture at the Academy Awards. Both critically acclaimed and a huge international box-office success, it featured an extraordinary performance from 15 year old Linda Blair, playing the role of Reagn, a 12 year old girl possessed by the devil. Few people who’ve seen the film can forget the intense emaotional and physical performance of Blair, won won a Gloden Globe and was nominated for an Academy Award for the role.

Thanks to horror film festival Monster Fest, Linda Blair will be in Canberra for a special 40th Anniversary screening of The Exorcist on Saturday 23 November at Greater Union, Manuka at 8:30pm. Linda Blair will introduce the film and talk about its making and the influence it had on her career at an extended Q&A after the film.

If you can’t see the movie, or are just too chicken, you can see Linda at Impact Comics where she will be doing a signing from 2.30 before heading off to the movies at 5.30. 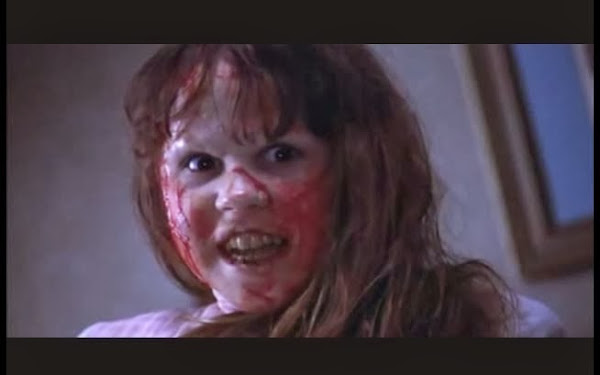 Hopefully they screen the good version not the silly director’s cut.

are you kidding??? the bit where she is bent over backwards ‘crawling’ down the stairs like a giant spider was one of the best horror scenes ever!!

I’m going to suggest that what happens in the film is what happens if we eat sausages that are cooked without doing a sausage safety course.

Gold from Poetix – as always!!!

Hopefully they screen the good version not the silly director’s cut.

I wonder how many times she has seen the film.

I thought she was very cute by the time she hit early 20s, but othr life issues prevented her from getting much further with her career.

“It’s been called the scariest movie ever made…”

It’s also been called the most idiotic movie ever made. Personally I think that may be a little harsh, but I’d have to think very hard to think of one that beats it.

bj_ACT - 34 minutes ago
My niece is the second person I’ve had recently complain that they have ended their long term cheap lease due to required p... View
Opinion 31

Steve Tsiamis - 2 hours ago
John Bosch I lock myself at home on these weekends. A short walk for a fish down at Cullendulla. View
John Bosch - 2 hours ago
Yep. Hopefully the traffic won't be backed up half way to Mogo like it was yesterday afternoon. View
Community 2

jorie1 - 6 hours ago
Well said Chewy14. Certain people cannot just change the Constitution because they feel like it or think it will work better... View
JS9 - 7 hours ago
You have no idea whether the majority want it or not at this point in time. That statement may have held in the late 80's/ear... View
chewy14 - 8 hours ago
Once again there's no real discussion around why the ACT Government should have these powers when the Constitution specifical... View
Lifestyle 3

Lauren Nihill - 6 hours ago
We are all so proud of you Kirrah! View
News 4

keek - 7 hours ago
They are an introduced pest and should not be roaming wild in any case. View
News 76

JS9 - 7 hours ago
Very true JC - as you say a lot of information is given away voluntarily, and with pretty much every phone having GPS in it t... View
JS9 - 7 hours ago
So you turn up to cafes and sit down for a lunch with people who you don't even know their names then CR? Surely across a gro... View
Julie Macklin - 18 hours ago
Samuel Gordon-Stewart I'll try that next time. Thanks. View
Breaking 4

Anne Rankin - 17 hours ago
I can’t wait to get back there again soon. View
Nadia Pessarossi - 18 hours ago
Love Corigans Cove! Only place to stay!! View
Lifestyle 33

Michelle Paul - 18 hours ago
They probably have to keep wearing their ring until the show is over.To throw us all off. View
Motoring 6

David Tickner - 20 hours ago
Alan Davey, sad but so true mate. So many whingers out there these days, with nothing better to do with their life unfortunat... View
show more show less
*Results are based on activity within last 7 days

Canberra home prices rose another 2 per cent in February amid a rush to buy into a market in full...
News 28

The developer of the problem-plagued Gungahlin pool has been absolved of liability for building defects, including if further damage or...
News 22

Did it start when you hauled those buckets out during a recent storm? Did you hear shaking sounds overhead that...
Property 48

@The_RiotACT @The_RiotACT
82-year-old Charlie Cover isn’t letting his age get in the way of his aspirations at the National Sheep Dog Trial Championships in Hall this week https://t.co/PFPY14G6Lq (46 minutes ago)

@The_RiotACT @The_RiotACT
Manuka Pool is celebrating its 90th anniversary and the Friends of Manuka Pool want to hear your stories about this iconic Canberra landmark https://t.co/6dssl3Zwgp (4 hours ago)