Live at the High Court. “Swelling the ranks of the peripatetic unemployed” 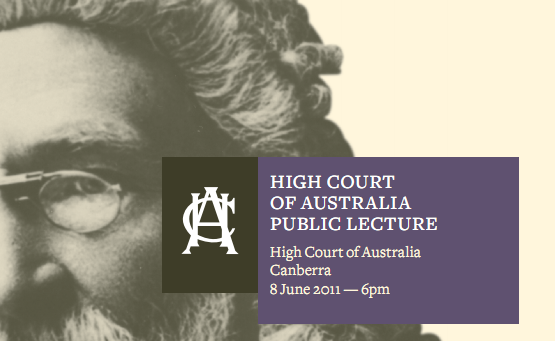 The High Court of Australia has sent in a flyer for their first public lecture of 2011.

‘Swelling the ranks of theperipatetic unemployed’:
The first decade of the High Court of Australia

‘The judicial power of the commonwealth shall be vested in a Federal Supreme Court, to be called the High Court of Australia’.

Despite this confident constitutional pronouncement, the establishment of the High Court of Australia was by far the most difficult of three branches of the new Commonwealth. By the end of 1905 members of the first High Court of Australia, all of whom were involved in the design of the Constitution, could reflect upon a most difficult two years in the life of the Court.

Even before its establishment in 1903, Australia’s Federal Supreme Court had proven to be an institution that attracted controversy. Denounced by some framers as an unnecessary luxury, or worse a wedge between Australia and the Mother Country, its size was diminished and the first Chief Justice was publicly criticised as unworthy of its high office. Its decisions were resented and ignored by the Supreme Courts, rejected by the Privy Council, and in 1905 two of its members seriously considered resignation after a protracted dispute with the Government of the day.

From these difficult beginnings the Court emerged to achieve the qualities that its supporters had hoped and desired. This lecture will explore the forces that were set against the High Court in the difficult decade when, to join the Court, in the words of one of its detractors, was to swell the ‘ranks of the peripatetic unemployed’.

2 Responses to Live at the High Court. “Swelling the ranks of the peripatetic unemployed”
Filter
Showing only Website comments

Up until the 1920s it didn’t have an official (temporary) home, the appointees to its judiciary were all former politicians who had lost elections but were given roles by former colleagues, and the courts sitting schedule of cities was determined by the comfort levels if threw elderly who formed its panel.
Seeing as it provided extensive opportunities for politically-appointed and motivated judges to travel and support their political masters, didn’t have a permanent building until 1980, and it wasn’t actually the highest court of the country until the Australia Act passed in 1986, and had used Privy Council decisions on Canada as a guide, I remain amazed that anyone took it seriously.

No comments your honor.

Lorraine White - 3 hours ago
Really good food and such great people. Love it. View
Kathleen Brooks - 6 hours ago
Juha Turunen this is what I was talking about. View
Fiona Mutton - 6 hours ago
Such a great cafe , always friendly and some of the best food in the region, whenever I am driving through from Braidwood thi... View
News 23

Margaret Freemantle - 3 hours ago
Tegan Martin not sure what the answer is. Somehow, there has to be some pride instilled - perhaps well kept places get reduce... View
May Mac - 4 hours ago
Is the government competing with everyone else to book tradies in to do work? Why don't they have their own, like they used t... View
Tegan Martin - 4 hours ago
The other worst part is that even if they manage to remove them, they'll have no choice but to give them another house, which... View
Opinion 50

bd84 - 5 hours ago
There’s always many “what about...” for things that people think are worthy. The budget isn’t a bottomless pit and th... View
HiddenDragon - 6 hours ago
"Whether the Coalition has traded in the debt truck or just parked it out of sight until needed remains to be seen." That par... View
Trevor Hicks - 7 hours ago
Jason Duarte Thanks to the ACT government... View
Opinion 94