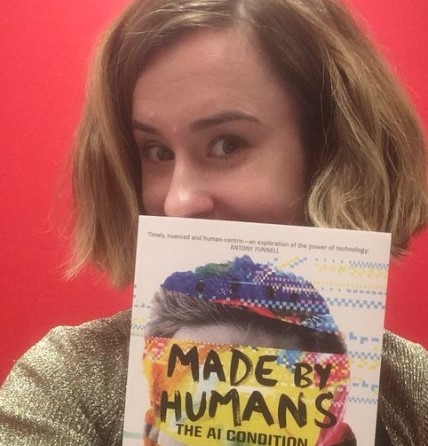 Ellen Broad with her effort, Made by Humans: The AI Condition. Photo: Twitter.

The shortlist for the 2019 ACT Book of the Year has been announced.

The list includes a cautionary tale about artificial intelligence, psychological thriller about how far people will go in the pursuit of love; a collection of sailing journals and logbooks from vessels travelling the Southern Ocean; a novel following the production of a complex manuscript in medieval London; and a series of poems which explore mourning and loss.

Minister for the Arts, Creative Industries and Cultural Events Gordon Ramsay said the Book of the Year winner would be announced early next year.

“The award supports local authors for excellence in literature, and a high number of excellent entries are received each year,” Mr Ramsay said.

“The winner of the ACT Book of the Year receives a $10,000 prize, highly commended books are presented with $2,000, and the remaining shortlisted authors receive $1,000.”

The judging panel was impressed by the number and quality of nominations received for the 2019 Award, which made the final shortlist a difficult choice, with the final six books representing a diverse range of writing.

Dean Carlson - 13 hours ago
Don’t let a noisy minority say they're talking on behalf of the town. This school is desperately needed and the proposed si... View
Kristy Norwood - 15 hours ago
I am 100% for the high school and it's location, as for the park it's government owned and they will do as they need, if they... View
savebungendorepark - 1 day ago
We should be clear. This isn't about "us against them". Virtually everyone who's campaigning to save the Park supports a high... View
News 8