Local College production of Wind In The Willows 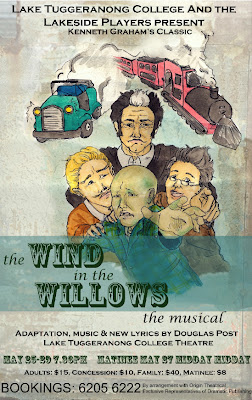 Tuggeranong College and the Lakeside Players (Young Canberra Citizens of the Year Group Award 2008) are excited to present“The Wind in the Willows” the musical by Douglas Post. This exciting production takes the audience into the world of the arrogant Toad, and his friends Mole, Rat and Badger. Join them as they venture into the wildwood and try to save Toad from his reckless adventure.

This enchanting story has been read and enjoyed by generations since the first telling by Kenneth Graham to his 4 year old son. It is a story of the enduring worth of friendship and the courage of friendship in the face of adversity.

Mole has a sudden case of spring fever, gives up on his house-cleaning, and wanders in the fields and meadows. He finds himself by a river (he has been such a stay-at-home that he has never seen it before) and meets the Water Rat, who invites Mole into his boat, something else he has never seen before. “Believe me, my young friend,” Rat says dreamily, “there is nothing —absolutely nothing —half so much worth doing as simply messing about in boats.”

A world of friendships, the joy of carefree wandering, of picnicking, and playing has opened for Mole. The Mole, the Water Rat and the Badger go to Toad Hall to try to help their friend Mr. Toad who has a bad habit of reckless driving. Toad has quite a few adventures. His irresponsible living and extravagance lead to the loss of his home to the barbaric stouts and weasels. The four friends go to battle to regain Toad Hall. The show ends with a banquet where all the friends rejoice at Toad’s return.

In the tradition of our previous hit musical shows Fame, Cabaret and Charlie and the Chocolate Factory, and Tommy the show features beautiful and evocative music played by our own band. Exciting costuming and set designs and, whilst children will enjoy entering the world of the Riverbank, people of all ages will be entertained by this much loved tale.

The Wind in the Willows is being performed at The Lake Tuggeranong College Theatre from the 25th -29th May at 7.30.

Matinee on Thursday the 27th at 12 midday.

Tickets can be booked through the College Front Office on 62056222

Anthony Beck - 22 minutes ago
Why can some training companies continue face to face training, and in a classroom environment, but transport training cannot... View
kenbehrens - 60 minutes ago
Roy, I've always been concerned about the active type of exerciser. The runner, the cyclist etc and how that type of activity... View
Kari James - 1 hour ago
I would find this job incredibly difficult and stressful - great work team! View
News 22

Capital Retro - 26 minutes ago
Your comment is well founded because in the USA limitations of land use for these abominations is now being exceeded (see vid... View
Ellen Duggan - 4 hours ago
My only comment is that I live at Crookwell and I find them an eyesore....The landscape is ruined and I know they don't work... View
Business 16

@The_RiotACT @The_RiotACT
Dobinsons is on a roll and bringing their baked goodies to a street near you. Find you how you can get your fix to make lockdown a little sweeter https://t.co/z8IGWiEGyy (55 minutes ago)