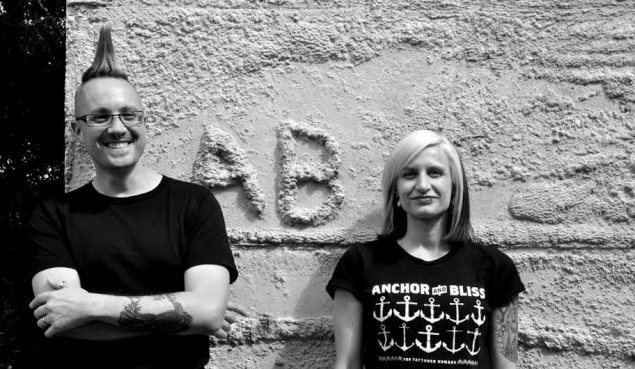 Andy and Bec Losik are the creative entrepreneurs behind tattoo-focused skincare brand Anchor & Bliss. While they’re public servants during business hours, like many in the sector they’ve dedicated their spare time to building a microbusiness that better reflects their passions and interests.

Last week the Canberra couple launched Anchor & Bliss’ first crowdfunding campaign to produce a commercial run of their all natural, eco-friendly range of skincare products that they say make tattoos pop and challenge the way that cosmetics have traditionally been marketed. At the time of publication, the project was 26 per cent funded (their fundraising goal is $7500, and they’ve raised $1935 so far).

“It’s a decent start, but now it’s about maintaining that momentum and encouraging people to support us and spread the word,” Bec says.

“How you perform overall is largely dependent on how you do in your first week. It’s all about the hustle and maintaining momentum up until the last initial days. We’ve been working on this for almost ten months and it’s at the point where we’ve got everything about the product ready to go, but we can’t take the next step without extra funding,” Andy adds.

He says more work is involved in launching a skincare product and starting a crowdfunding campaign than you might expect.

“In terms of working out what we were going to put into the product, that’s what we expected. We did research on different oils and their properties and spent ages making different batches,” he says.

“Locking down a manufacturer was a little more complicated than we had anticipated. Rather than going overseas, we’ve chosen a Brisbane manufacturer because of the convenience, the ability to get in touch with people quickly and also to ensure that the product quality remains high.”

He explains that Anchor & Bliss reflects the couple’s ethics and values. The oil moisturiser, which is packaged in a carbon neutral bottle, is all natural, vegan, contains no alcohol or parabens and is not tested on animals.

As well as addressing environmental issues, Andy and Bec are also concerned about the ‘boys club’ attitude of tattoo culture.

“Most images of tattooed women show them in their underwear and in provocative poses. We feel like this reinforces traditional gender stereotyping instead of celebrating women as people with awesome artwork on their bodies.

“Sexy can be fun – but we want to help women and men to feel comfortable and confident in their own skin, in whatever ways work for them,” Bec says.

She says that if the crowdfunding campaign is a success, the plan is to eventually expand the Anchor & Bliss product range and work on the business in a full-time capacity.

“We’re both public servants, which is so Canberra, but we both like the idea of being self sufficient. What we’d like to do is grow the brand and add products to the line, and eventually expand into other kinds of care products and tattoo lifestyle products, like clothing lines, art prints, maybe even hair products.”

Andy and Bec are both lifelong Canberrans, and Bec says that in recent years it’s become an increasingly exciting place for creative and entrepreneurial-minded people.

“It’s the perfect time for us to be doing what we’re doing in Canberra. There’s so much enthusiasm for people doing their own things. We both grew up here, Canberra is part of who we are and we really embrace that,” she says.

Hi Holden, we’ve given away literally hundreds (actually almost 1000) of those things … what people do with them after that though … 😉

I keep thinking A&B is a pub. Eek!

I’ll pay more attention to the next sticker I see.

Which one is responsible for putting their stickers all around town? 😛

Hi Holden, we’ve given away literally hundreds (actually almost 1000) of those things … what people do with them after that though … 😉

Which one is responsible for putting their stickers all around town? 😛