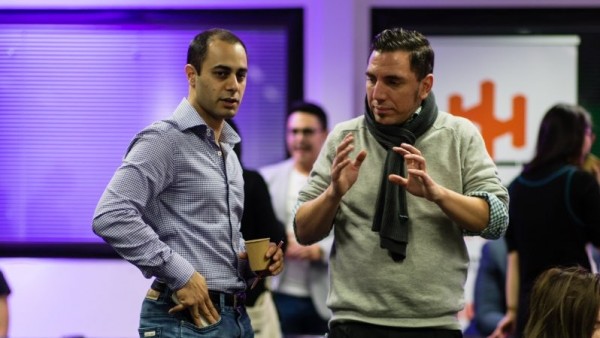 “The thing about teaching is that it’s not a job, or even a vocation. It’s a chronic condition. You contract it at a certain point and then you have to deal with it for the rest of your life,” he says.

“It means that when someone comes to you and asks for your thoughts on an idea, it’s hard not to say, ‘Oh, you should talk to this person and read this article and watch this video.’ You can’t help yourself.”

The pair met while studying at ANU. Rish was studying a graduate certificate in commercialisation to complement his mathematics PhD, while Camilo was completing his masters in management.

They turned their shared interests in entrepreneurship, lecturing and tutoring into Implement Imagination. Though it mainly works with public and private sector clients, the agency has also coordinated local entrepreneurship competition InnovationACT since 2014.

Most recently, Implement Imagination co-developed Stir in collaboration with the Shift One Crew. Stir is a crowd-voted micro grants platform that gives young Canberrans the tools, exposure and funding to get their projects off the ground.

The platform is a CBR Innovation Network initiative, and was developed with input from Canberra’s young creative community.

“CBR Innovation Network asked if we could run a competition to promote young entrepreneurship in the ACT. They idea was that entrants would make a video and the winner would get a cash prize,” Rish says.

“We said that the competition could go further to achieve long term outcomes. What we actually wanted was to engage with youth, find out their needs and develop a solution that meets those needs.”

He and Camilo assembled 20 of Canberra’s influential youth leaders and ran a series of workshops to understand young people’s concerns, needs and aspirations.

From there, they worked alongside CBR Innovation Network and the workshop participants to develop new avenues to support and encourage young people – and Stir was born.

“Stir started as a grants platform, but it’s actually an education platform. It teaches you how to explain your project in a way that gets support, as well as giving you an opportunity to validate projects. It’s all about getting young people sensitised to feedback,” Rish says.

Rish, who first moved to Canberra in 2005, says the city’s innovation and entrepreneur community is completely different now compared to a decade ago.

“Canberra has changed a lot in the past few years. There’s so much support for people who want to try new ventures or test out an idea. Canberra is also unique because there’s plenty of opportunity, but less competition,” he says.

“For us, CBR Innovation Network has been particularly supportive. In many cases they’ve given us a free hand and trusted us to do things that might be considered a bit unconventional. There’s a lot of that in the Canberra community.”

The nature of the community has changed too.

Camilo says that in the past, many Canberrans viewed attending entrepreneurship events as a way to impress prospective employers. These days, there are fewer resume-builders and more who genuinely want to see their ideas succeed.

“When I first arrived in Canberra the public sector culture was permeating a lot of the innovation and entrepreneurship activities. People would come to events to meet high power individuals and network, but they were more interested in looking good on a resume than actually being an entrepreneur,” Camilo says.

“Now we’re getting people to these events who have ideas that they’re super passionate about and either want to start working on, or who have already started.

“In the last InnovationACT workshop we had about 80 people and a nice spread of undergrads, post grads, research students, the CSIRO, high school students and public servants. As part of their pitch, we asked them to tell us about what they’re going to do to start. About 50 per cent had already started. That’s great.”