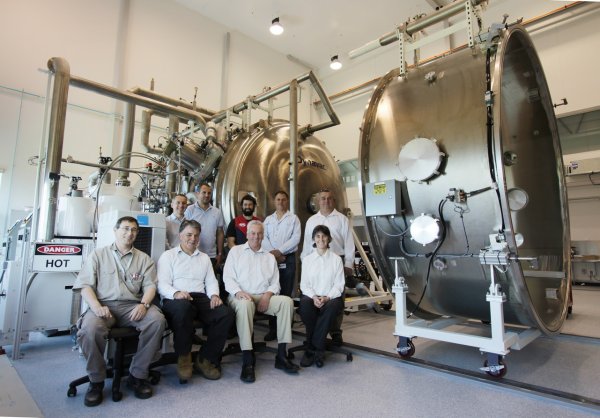 It’s not everyday that you get to interview a rocket scientist whose invention is helping to make interplanetary travel a reality.

Dr Christine Charles is head of the Space Plasma, Power and Propulsion Laboratory at the Australian National University. For the past decade and a half her research has been focused on finding new, more efficient ways to propel vehicles (and humans) through space.

“I’ve always been interested in science, physics and engineering. But my interest in space propulsion started 15 years ago when I spent time with a NASA astronaut in the United States. That was the trigger,” Dr Charles says.

Dr Charles is the inventor of the Helicon Double Layer Thruster, a new type of space engine that could dramatically reduce the time taken to travel to Mars. This new propulsion concept has the potential to propel humans throughout the solar system and greatly decrease the costs of maintaining satellites and spacecraft in their desired orbits.

While results so far have been positive, she says that it will still be “five, ten, fifteen years” before the technology could be widely used for space travel. In the meantime, her team has everything it needs to test rockets thanks to a space simulator (a metal box that sucks air out to produce a vacuum similar to space, pictured) at Mount Stromlo.

Dr Charles has a French engineering degree in applied physics, a PhD in plasma physics, a French Habilitation thesis in materials science and a Bachelor of Music degree in Jazz from the ANU (she also performs keyboard jazz with her group, Harmonic Propulsion).

She says that she gets most excited about getting young people involved in science, publishing papers and discussing her findings with others. She shares her knowledge on ABC Catalyst, the Discovery Channel and through radio and public lectures. Over the weekend, she also presented at TEDx Canberra, where she spoke about potential ways to get to Mars and back.

“It sounded exciting and like a great way to reach out to the community. There’s so much going on at Mount Stromlo that’s for Canberra and for Australia, and it’s important that we share what’s going on,” she says.

Dr Charles has demonstrated her new space engine both at NASA and the European Space Agency, as well as at EADS-ASTRIUM, which runs the Airbus 380 and the Ariane Rocket program. She has also been awarded five Visiting Professorships at the University of Orleans in France since 2004.

But while her research has taken her all over the world, she says that there’s something unique about Canberra, where she has worked since 1992.

“In Canberra, you are far away from where it’s really happening, but that means you have to be creative and think about problems from a different angle, because you have to be cost effective too,” she explains.

“The only way we can survive is to be passionate, and we do a great job. We’re known worldwide for our research and training. It’s easy to be in direct contact with key players, so we do collaborate a lot, and we love people to come and visit us too.”

I’m not sure so much money should be put into experimental engines, etc. Leave it the Jet Propulsion Laboratory in California. They have 5000 staff and a budget of $1.5 billion.

Great series this is. Canberra punches well above its weight in so many ways.

Two questions:
– Do you (Amy) know if that is the prototype of the thruster on the right in the photo? If so, is it the one to be used in the trial? Where is something like that built?
– Are there any ‘it’s not rocket science’ jokes she HASN’T heard?

Hey Justin, awesome that you like the series. My understanding is that the machine in the image is the space simulation chamber, and the thrusters are tested inside. I’m not sure where it was built, but it cost about $25 million to do so!

Haha, I should have asked Christine about the rocket science jokes. I’m sure she has heard them all.

Great series this is. Canberra punches well above its weight in so many ways.

Two questions:
– Do you (Amy) know if that is the prototype of the thruster on the right in the photo? If so, is it the one to be used in the trial? Where is something like that built?
– Are there any ‘it’s not rocket science’ jokes she HASN’T heard?

The local leaders series is fantastic! It’s great to read about these interesting Canberrans on a regular basis.

Thanks MBird. Glad to hear you’re enjoying the series!

She works with metal? ANU, I thought you just announce that you are divesting all links with the mining industry and metal extraction? (Despite accepting a massive donation from a metals industry investor recently ……. )

The local leaders series is fantastic! It’s great to read about these interesting Canberrans on a regular basis.

Debbie Macaulay - 1 minute ago
We lived in Canberra for 14years and never experienced this phenomena. I found it friendly and interacted with people from al... View
Margaret Freemantle - 1 hour ago
Being born here and loving the place, I feel sad if people find it cliquey. Ideas to make it less so?... View
Janet Ilchef - 1 hour ago
Matthew Soall tribal, perhaps? View
Food & Wine 10

Lin Van Oevelen - 42 minutes ago
I am still looking for a great pad thai on the Northside. One of those simple dishes that requires real skill to get right, I... View
Salima Haidary - 2 hours ago
Kinn Thai used to be good, sadly no more 😭 View
Elise Quodling - 5 hours ago
David Gray research? 😉 View
Opinion 204

@The_RiotACT @The_RiotACT
After a tough few weeks for the team at Mogo Wildlife Park, the surprise delivery of a leggy new addition was a treat for visitors & staff https://t.co/Pc3ECJmQgp (1 hour ago)